Despite a visual downgrade, this port is worth your time.

Posted By Alex Jackson | On 12th, May. 2015 Under Article, Reviews | Follow This Author @teh_jackson

X enoblade Chronicles on Wii is a testament to the power of a fanbase, and it took a literal rainfall of support to convince Nintendo to bring it westward. The game became something of a cult classic very quickly, but also impossible to find with limited production runs and exclusivity to Gamestop chains.

Hoping to leverage the fan hysteria around the title, Xenoblade became reborn as the first New 3DS exclusive title. It is questionable whether the stopgap handheld can handle the power of Xenoblade; however, despite the shortcomings, I was really feeling it. "It might be a fairly trite tale within the realm of the Japanese Role Playing genre, but the tight writing permeates the game and brings the player along the emotional ride "

The story is an old one, both in universe and in reality. An ageless war between two giants, the biological being known as the Bionis and the mechanical counterpart known as the Mechonis. Once the giants freeze in a stalemate, and a few millennia pass they give rise to many kinds of races who live off the bodies of the giants and carry on this timeless conflict.

Its during this time period we meet Shulk, an engineer living peacefully in one of the Hom colonies on the Bionis, studying the legendary Monodo blade that was said to be the one wielded by the Bionis in the old war. A surprise attack by the robotic Mechon turn the world of Shulk and his friends upside down, and usher Shulk into his destiny as the wielder of the Monado.

My plot summery unfortunately can’t ever do the story any justice within the body of this review. It might be a fairly trite tale within the realm of the Japanese role playing genre, but the tight writing permeates the game and brings the player along the emotional ride with the diverse cast. It really earns that constantly misused adjective “Epic”, with the hundred hour plus story matching perfectly with the expansive world. "The New 3DS version sacrifices several lighting effects and general texture quality, on top of the already abysmal resolution the New 3DS maxes out at. The result leaves Xenoblade Chronicles 3D looking no better than a Playstation 1 game. "

Expansive is really the only word to describe it too. Singular maps are simply massive, not knowing the meaning of the term “draw distance”. Stunning vistas and gorgeous fields stretch for miles before you, delivering on the feeling of being a tiny creature living on the back of a giant.

Load times are minimal, maybe a few seconds long between map transitions and cutscenes, but never take you out of the absorbing world. Battles take place in real time and are fashioned almost like MMO combat, meaning the transition between exploring the world and fighting is seamless.

Truly, Xenoblade is one of those games that doesn’t simply give you a skybox of lies. If you can see it, you can probably go there. But what sacrifices they made to force it all into the handheld form. Resolution was never Xenoblade’s friend on the Wii, with the game leaning on art design to make the world both cohesive and easy on the eyes. The New 3DS version sacrifices several lighting effects and general texture quality, on top of the already abysmal resolution the New 3DS maxes out at. The result leaves Xenoblade Chronicles 3D looking no better than a Playstation 1 game. "Positioning is paramount in Xenoblade, with skills like Shulk’s backslash having alternate or bonus effects when delivered from the proper location on the foe. "

While it doesn’t look the best, it does still play smooth as butter. Framerate rarely drops without a ton of action on screen, and the new 3DS controls are put to the limit, especially during battle scenes. The score is simply engrossing throughout, with big orchestrated pieces and somber melodies slotting in perfectly to every scene and environment. 3D is put to OK use by the game, but given the lengthy sessions it sucked me into, I turned it off in favour of battery.

As mentioned before, Combat is more reminiscent of MMO titles. Less Persona, more WoW. A battle pallet opens along the bottom of the screen upon engaging an enemy, with the arts of whomever you happen to be controlling at the time. Basic attacks happen automatically once you get in range, allowing you to focus on positioning and art usage.

Positioning is paramount in Xenoblade, with skills like Shulk’s backslash having alternate or bonus effects when delivered from the proper location on the foe. Finding that opening comes from managing the enemies attention in the form of “aggro”. Certain party members are better at drawing that aggro and taking knocks than others, but you don’t want to let them take a beating sight unseen. How you manage that can depend on the situation, whether that’s healing arts or moving the aggro around to different party members. 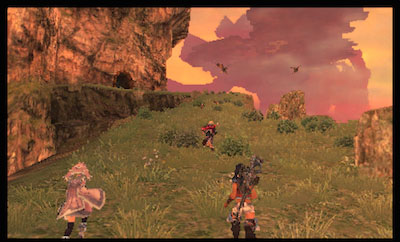 "One might go into Xenoblade considering it to be Shulk’s story, but while a central character, it really isn’t all about him. Not only is the diverse cast to the benefit of the story, but you can play as every party member to your liking. "

Shortly into the game, the Monado grows in power and adds an additional wrinkle to combat with visions. Deadly blows become revealed to you ahead of time with premonitions, and giving you a chance to prevent the attack through your own skills, or asking another party member to use theirs. Different types of enemy arts demand different techniques to change the future such as moving their attention around or shielding the target from the attack.

One might go into Xenoblade considering it to be Shulk’s story, but while a central character, it really isn’t all about him. Not only is the diverse cast to the benefit of the story, but you can play as every party member to your liking. This allows a change up in both your personal play style and party flow depending on situation or personal preference. In fact, it’s to ones benefit to switch up party members frequently in order for party members to build affinity between each other.

Affinity ties into skill trees, of which each character has three. You can focus on one tree at any time, and once leveled sufficiently it unlocks a permanent skill for that character. Skill linking though is something that can take place between party members once they’ve fostered their relationship, and quite basically means they can share skills between each other. It’s yet another layer onto the massive control you have over party building. 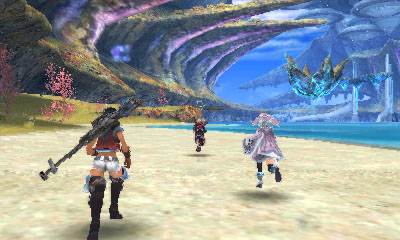 "The fact remains that Xenoblade is a massive, massive title. Its greatest asset, and quite unlike anything else in its genre, is the expedience of it all. "

Equipment both unique and regular, gems, affinity with areas of the map, the fact remains that Xenoblade is a massive, massive title. Its greatest asset, and quite unlike anything else in its genre, is the expedience of it all. The best example is questing, where most of the time you need not return to the quest giver to hand it in. There are a handful of story driven ones where you return to the same named NPC a few times, but the majority can be tackled passively as you play the game normally.

Fast travel is also open from the outset, cutting any tedious backtracking through terrain or enemies way below you out completely. NPC characters run on a schedule much like Majora’s Mask did, but Xenoblade one ups it by including a clock you can manipulate down to the hour, preventing busywork like tracking down a quest giver during their day or waiting for them to show up.

Xenoblade is a particularly special experience, though the new 3DS does make it a little harder to swallow. If one can get past the enormous visual downgrades, there is still a massive, breathing world to explore, just filled with great characters. If you’ve been sitting on the Wii version of the game, or are thinking about dropping for the New 3DS to play it, the Wii one is far and away the definitive edition. If you have the system, and want an experience that makes the most of it, and something pretty amazing on its own merits, it’s Xenoblade time.

This game was reviewed on the New Nintendo 3DS.

Massive world, Few load times to pull you out, Combat keeps you involved through a unique, MMO-esque battle system, Epic story and well written characters to inhabit the world, and an Amazing soundtrack

Lost some clarity on the handheld screen. Seriously looks no better than a PS1 game.

Xenoblade Chronicles earned its cult status on the Wii, and the New 3DS version makes it much more widely available. Aside from a visual downgrade, the handheld port is worth your time.

A copy of this game was provided by developer/publisher for review purposes. Click here to know more about our Reviews Policy.
Tagged With: New 3DS, Nintendo, Xenoblade Chronicles 3D