An incredible game that has stood the test of time, and then some.

The original Xenoblade Chronicles casts a long shadow. Originally released for the Wii, the game wasn’t even intended to launch in North American countries – while Europe was more than happy to localize it, Nintendo of America didn’t feel there was a market for it. In the end, a massive fan campaign was launched, and Xenoblade had a belated release – at which point, everyone realized what early reviews had been telling them already. This game was an all-timer.

Ten years later, with Xenoblade having spawned a whole multi-million seller franchise, Nintendo returns to the game that has since gone on to become a classic. But multiple questions abound with this “definitive edition” re-release: is this fourth release of the game in a decade (counting the digital only re-release on Wii U at any rate) warranted? Is Xenoblade even necessary when the Switch already has the sequel? Does the game even hold up?

The answer to all of those questions is an unequivocal yes, because Xenoblade Chronicles is every bit the towering titan of its genre in 2020 that it was a decade ago. At the time, the game was praised for being far prescient and ahead of its time, praise that seems to have been well earned, given how well Xenoblade Chronicles holds up against any contemporary RPG. But it’s not just that this re-release makes a timeless game accessible on modern systems – rather, the Switch release of Xenoblade is actively the best version of the game yet, and one that makes the game shine and realize its full potential like none of the previous releases have yet.

"The Switch release of Xenoblade is actively the best version of the game yet, and one that makes the game shine and realize its full potential like none of the previous releases have yet."

This is most evident in what is the most immediate (and biggest) update the game has had: the graphics. The original Xenoblade Chronicles, while being an astonishing technical achievement for being on the Wii, was, let’s face it, an ugly game. Oh, sure, the art style was strong, and there were gorgeous vistas and environments for you to explore, but the character models looked like they belonged in a PS1 game, low resolution and SD format seemed to be cramping out the whole world, the textures didn’t hold up to any scrutiny, and the animations were janky and awkward. The New 3DS re-release, which similarly was an astonishing technical achievement, made matters worse, with even lower resolution, a far smaller screen (cramping things even more), and a system that was weaker in many ways, which necessitated further compromises.

On the Switch, though, Xenoblade Chronicles sings. The character models have gotten the most dramatic facelift, though the environments have been cleaned up as well. The widescreen aspect ratio does wonders for encapsulating the game’s literally sweeping sense of scale, and while some problems remain (most notably, the animations are untouched, and the textures are still pretty rough), the upgrades, coupled with the game’s extraordinary strong art style, make Xenoblade Chronicles Definitive Edition a really pretty game. Don’t get me wrong, it obviously won’t win awards for its graphics, but it looks positively gorgeous on the big screen (with the visuals taking a noticeable hit in handheld mode, though the game still performs better on that front than Xenoblade 2 did).

The discussion of this game’s graphics is about more than just aesthetics. Xenoblade Chronicles has a vast, stunning, strikingly gorgeous world, with some of the most imaginative environment designs to have appeared in any game, ever. The true beauty of Bionis and Mechonis has never bloomed like it does in Definitive Edition, with the expanse of neverending gorgeous vistas stretching out before you for as far as the eye can see, until it meets the towering limb of Bionis, looming over everything. The graphics create an incredible sense of place, and instill the appropriate sense of wonder at the wild, almost surreal lands you will find yourself traversing. 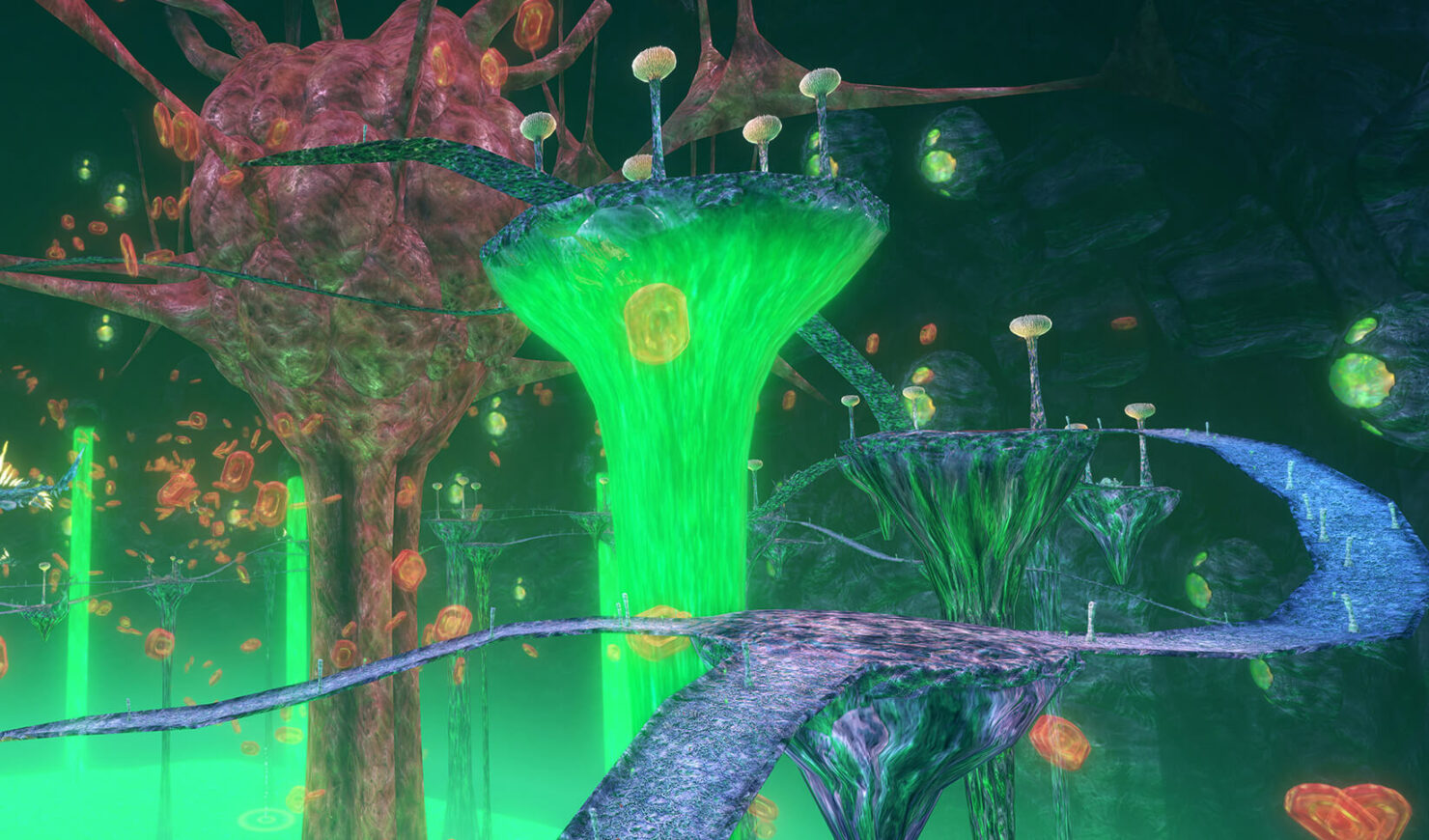 "The true beauty of Bionis and Mechonis has never bloomed like it does in Definitive Edition, with the expanse of neverending gorgeous vistas stretching out before you for as far as the eye can see, until it meets the towering limb of Bionis, looming over everything."

Let’s talk about those lands for a second, because Xenoblade’s world deserves a special shout. In this game’s world, the story goes that Bionis, representing biological life, and Mechonis, representing mechanical life, were two titans that fought a timeless battle against each other in a time long past. Neither titan could establish any clear or lasting victory, and eventually, they both fell quiet and lifeless, with their gigantic bodies serving as the world that new life grew on – biological life, including the human-like Homs, on Bionis, and mechanical machine life on Mechonis.

This unique setup leads to some incredible world design and vistas that are otherwise entirely unmatched by any other game. Xenoblade Chronicles has an incredibly varied world, with caves, grasslands, tundras, swamps, forests, mountains, you name it, and it’s probably in the game. It’s not just skin deep beauty, either, because each area is designed marvelously well, relying on interesting landmarks and distinctive land formations to guide the player and their curiosity, and naturally instill a desire to explore the world in the same way that Breath of the Wild’s Hyrule (another game Xenoblade developers Monolith worked on, co-incidentally enough) did. You can spend hours lost in Xenoblade’s world, and it is always time well spent, because all effort is appropriately rewarded.

The vast nature and free-form exploration of Xenoblade actually predates the modern open world trend – and it was one of the reasons the game was originally considered so ahead of its time when it originally launched. Today, open world games are far more common, and while Xenoblade’s instanced and discrete environments are very obviously not a true open world, they can stand side-by-side with most modern games in the genre and still come out on top.

"You can spend hours lost in Xenoblade’s world, and it is always time well spent, because all effort is appropriately rewarded."

Much like with the graphics, Xenoblade Chronicles represents a thorough and indisputable improvement in all other areas. The game’s battle system, for example, is still almost entirely untouched from the original game, with its mix of auto-combat and MMO-style cooldown-bound powers and attacks. Xenoblade’s battle system, while borrowing immensely from Final Fantasy XII, was almost entirely unique at the time of its release, and while this is the one area where its follow ups have improved things immeasurably, it still largely holds up. There is definitely some jank (the positioning detection doesn’t work as well as it always should, and a lot of times you’re at the mercy of AI party members doing what they should be doing, when they should be doing it), but it’s compelling and engrossing, and incredibly deep, leading to a whole lot of flexibility in how you design your characters’ roles within your party.

In spite of the minimal changes, however, the battle system benefits from a lot of QOL additions, including the ability to tell when which attack will be most effective, for example, as do the game’s famously bad side quests (which, now that they are properly and persistently marked and tracked, and all requirements explicitly laid out so you don’t have to go over all of Bionis and Mechonis with a fine toothed comb, are far more tolerable now). The music of the game has also seen a touch up, but this is nowhere near as comprehensive as the visuals – which is a good thing, because the original soundtrack is incredible, and shouldn’t be messed with. The minor changes made to the soundtrack are all for the better, bringing out the soul of the songs even more than the original tracks did, though if you find yourself preferring the original rendition, you can switch back to it at any time.

The other big change is the addition of an entirely new area, and new story content. This takes the form of a brand new epilogue for the story, called Future Connected, which takes place after the events of the original game. Future Connected adds an entirely new area, Bionis’ Shoulder, to the game, as well as a brand new plot line that resolves some threads from the original game that weren’t fully wrapped up, while opening up a few whole new cans of worms, narratively speaking. It also features a new battle system (although “new” is a bit misleading here – it is almost identical to the battle system in the base game, with some features being substituted by other, very functionally similar ones), as well as new side quests, which are actually substantive and well designed (unlike the ones in the base game). Future Connected represents an incredibly engaging bit of content – it almost feels like an expansion for the original game, in many regards, and is worth playing through all on its own. Thankfully, you can access it from the Title Screen at any time, without having to complete the base game, an option that I am sure veterans will appreciate.

As far as monikers for re-releases go, “Definitive Edition” is pretty reused, and almost never accurate. Xenoblade Chronicles represents the rare time that the name fits. In spite of its age, and the bevy of re-releases the game has already had previously, Xenoblade Chronicles Definitive Edition delivers the authoritative, definitive take on a classic game, one which stands the test of time, and remains as compelling today as it was back when it first launched – if not more so. With its time honored metaphysical story, its stunning world, gorgeous soundtrack, and intricate RPG mechanics and systems, Xenoblade Chronicles: Definitive Edition is quite possibly among the best RPGs in a generation full of amazing ones, and an absolute must-buy for anyone with even a passing interest in the genre.

Graphics take a hit in portable mode; some oddities in graphics, such as awkward animations, remain; the battle system feels less nuanced compared to later games in the series

Final Verdict:
AMAZING
A thorough improvement across the board, Xenoblade Chronicles Definitive Edition takes a modern classic, and elevates its stature further.
A copy of this game was provided by Developer/Publisher/Distributor/PR Agency for review purposes. Click here to know more about our Reviews Policy.