It’s surprising to me just how few series take the anthology approach in this industry. Final Fantasy is the major example, but not many others jump to mind. Not being tied down to a specific world or set of characters, while still being able to call on familiar mechanics and brand recognition, has a lot of potential, and Xenoblade Chronicles X runs with that notion. Specific elements from the cult classic Wii and New 3DS RPG are recalled and remixed effortlessly, but it should be stated without any room for misinterpretation, Xenoblade Chronicles X is very much its own beast.

Xenoblade was a tightly scripted, high fantasy story, and that was one of the strengths of that game. X takes a decidedly different approach to its narrative, not only in setting but in structure as well. The ship you were on, the White Whale, is tailed and attacked by one of those alien forces, and ends with a crash into, and colonization of, the planet Mira. 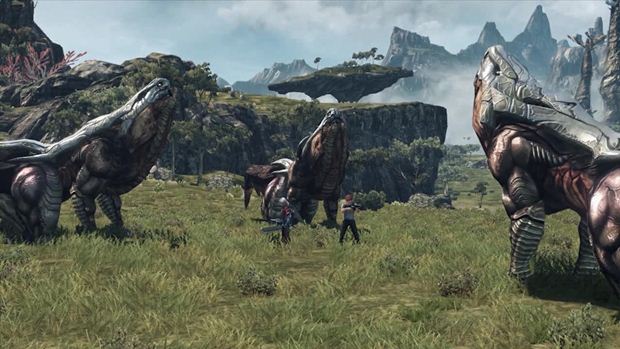 "The cast around the avatar is easily as fleshed out as the cast of the original Xenoblade, and the larger narrative is mainly pushed forward by them."

Instead of putting you into the shoes of a fleshed out character like Shulk, you create an avatar from a decent selection of pieces and step into the world of X to fill a very “Persona” style silent protagonist role, not sitting on the sidelines while the real characters move the narrative ahead, but giving the player a vessel to exist on Mira and answer questions as they please to give some agency. The amnesia trope cheeses this up in the beginning, but it’s quickly lost within the gameplay and forgotten by the prologue events, where you join the paramilitary organization, BLADE.

The cast around the avatar is easily as fleshed out as the cast of the original Xenoblade, and the larger narrative is mainly pushed forward by them. One of the first characters you meet, Elma, is a full person with her own history. This remains true for every member of the large cast, and pursuing “affinity missions” during play dig deeper into specific party members much like a beautiful combo of the Persona “Social Link” mechanic and the wonderfully designed side quests of The Witcher 3.

To talk about the actual story, though, X chooses to go in quite the opposite direction of Chronicles by giving the main story line no more importance than any of the other abundant quests on Planet Mira. Narratively, everything you do aids in the effort to find the part of the ship that contained the majority of the Earth refugees in stasis, the Lifehold, before any hostile Xenoforms or Indigenous wildlife destroy it. Everything from planting probes to expand your scan range (and opening new fast travel locations) to assisting other members of BLADE in their efforts moves you closer to the ultimate goal, either through the literal growing in strength and leveling up your class, to gaining new party members. 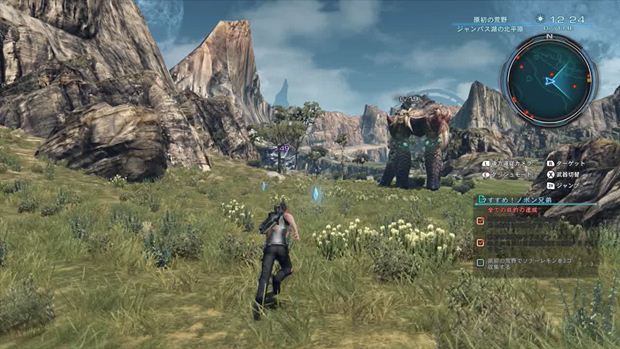 "While both the Wii original and this game share vast feeling worlds, Xenoblade Chronicles X is very much about the act of existing in on the planet. Instead of the linear sections of the last game as you climbed up and down the Bionis, the totally open world of Mira isn’t artificially blocked off from you whatsoever at any point."

Battling foes both large and small recalls the combat of Xenoblade, while not being a direct parallel. It still invokes MMO style combat, where you auto-attack your foe, select various arts to deal additional damage with specialized attacks. Effects like staggering and toppling still play a big part in combat, as does Aggro to a lesser degree. The largest changes come in the soul voice system and the use of both ranged and melee combat. Each character has two weapon slots, and their class determines what they can equip. As a general rule though, while melee hits harder than a gun could ever hope to in a single attack, it’s usually safer to keep your distance and whittle them down with a gun until you stagger them. X adds yet another new wrinkle to combat by having you consider not just what you attack, but where on it you attack. As you move around a foe you’ll focus your energy on different body parts, which when destroyed might cripple your enemies’ ability to use their arts.

While talent arts and visions are gone, the arts system gets a small overhaul to incentivize using auto attacks over spamming the arts. Every art gets a secondary cool down timer to add secondary effects or strengthen the attack, and the timers can be shortened by using the auto attack of whichever weapon the art uses. The Soul Voice system encourages teamwork with your party, as any team member, including the player character, can call out for specific arts from time to time, and the request being responded to by another character results in some raised MP and a heal. Soul Voice is the main way to manage healing in X, making it a super important, but thankfully super easy, mechanic to understand.

While both the Wii original and this game share vast feeling worlds, Xenoblade Chronicles X is very much about the act of existing in on the planet. Instead of the linear sections of the last game as you climbed up and down the Bionis, the totally open world of Mira isn’t artificially blocked off from you whatsoever at any point. If you can’t get to a place you can see in the distance, it’s because you aren’t ready to deal with the hostile Indigins of the area, or lack movement options like the Gundum-esque “Skell”, which besides being super cool, helps level the playing field dramatically against the larger wildlife, or aids traversal to the more outlaying areas of the game. 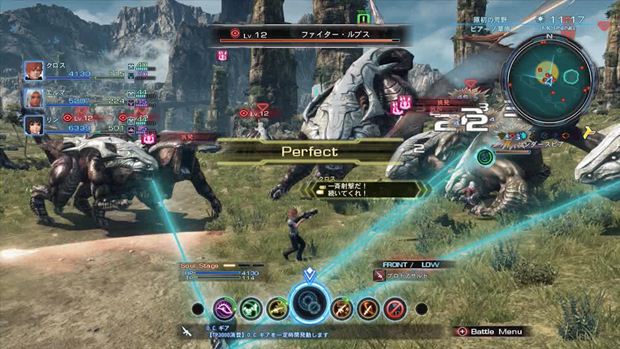 "As in depth as this review is, I barely scratched the surface of it. Maybe that’s the only real weakness I can draw for this game, it can be a little impenetrable even for those familiar with the series, and does next to nothing to explain things to the player."

The Skells take a long time to earn in the game, allowing you to get to grips with the basic gameplay, which don’t change dramatically at all while fighting in the mech. It is impossible to deny that cool factor of moving around the plains of Mira in a transforming Gundam-esque suit, and eventually, flying over them. They’re totally customizable, with their art attacks depending on equipped weapons, and are far more deadly in combat than you could ever hope to be on foot. The trade off is that they run on a finite fuel supply, which can drain rather quickly during combat. They can recharge themselves when you disembark, meaning you still need to be able to defend yourself.

The wild vistas of Mira are particularly impressive from the poor little Wii U. Though they aren’t quite as crisp as a similar world on the PS4 or Xbox One, say, Metal Gear Solid V: The Phantom Pain, they managed to squeeze everything in while keeping load times non-existent while traveling, and minimal while warping around. An impressive draw distance challenges you to climb the next distant mountain and the technical wizardry feeds right back into how compelling it is to just explore the world. Where Xenoblade had that feeling of being on the back of a giant, X really sells the vibe of exploring the planet, and makes exploring it as engaging as a Far Cry.

Xenoblade Chronicles X is an amazing effort. From a narrative, technical and gameplay point of view, X fires on all cylinders. As in depth as this review is, I barely scratched the surface of it. Maybe that’s the only real weakness I can draw for this game, it can be a little impenetrable even for those familiar with the series, and does next to nothing to explain things to the player. Once it clicks though, Xenoblade Chronicles X is going to give you everything you put into it, with interest, and totally deserves to stand next to heavyweights like Persona.

Technical marvel for this wide open, living world to come to life on the underpowered Wii U. Realistic cast draws you into the story and their personal struggle, even in the place of a larger arching story. Interesting evolutions of the battle system are familiar to old series players without being derivative.

Learning curve for the game is really steep, and they don’t explain very much at all. Some design strangeness can hamper progress.

Xenoblade Chronicles X is a masterclass of design that we don’t often see in the JRPG genre, and easily stands besides the few heavyweights we’ve seen so far this generation. Once you get over the hump and understand its systems, X offers a simply huge world to seamlessly explore.

A copy of this game was provided by developer/publisher for review purposes. Click here to know more about our Reviews Policy.
Tagged With: monolith soft, Nintendo, wii u, xenoblade chronicles x