Ninja Gaiden is another of those storied franchises with a legacy that can be traced back to the 8-bit era, alongside such big names like Metal Gear and Metroid. Yet, after three well received Nintendo Entertainment System entries, the Hayabusa clan and subsequently the falcon-cursing, demon killing badass protagonist, Ryu Hayabusa went silent for a number of generations.

He would emerge from the shadows many years later in an Xbox darling reboot, where its insane difficulty remains infamous to this day. While his new 3D adventures departed from the demanding platforming of his original outings in favour of more combat heavy designs, the common thread running through the series was one of being unafraid to make a player work for their progression, going from Ninja Dog to a master. However, much like Yaiba, the new protagonist himself in this loosely connected spinoff is not Ryu, Yaiba: Ninja Gaiden Z is not a Ninja Gaiden game. 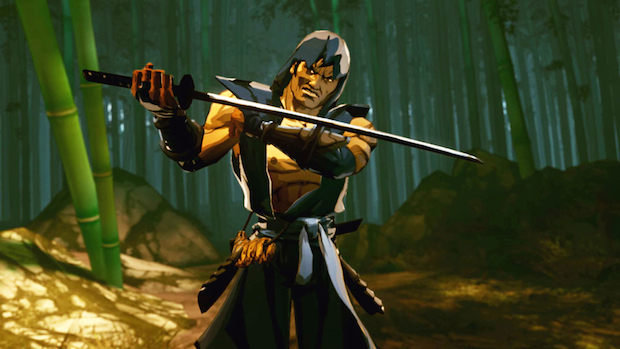 "Rudementery platforming elements that might as well have been quick time events with how contextual they are break up the pace between fighting, which itself borrows it’s parts from most of it’s contemporaries except the series it’s actually spun off of."

The only real connection in fact, lays in the plot. You play as Yaiba, whose backstory isn’t overly explained outside of collectable, optional text exposition. The opening sees Yaiba and Ryu Hayabusa locked in battle, in a scene reminiscent of the opening to the NES classic. Yaiba does not emerge from this engagement as the victor, and is seen dying. Fast forward a few weeks, and Yaiba has been reanimated by a malevolent benefactor, with shiny new cyborg enhancements. Yaiba is hardly the only one back from the grave however, as legions of undead stiffs in all shapes and sizes are now roaming the streets. Of more concern to both Yaiba and his guardian however, is the presence of Hayabusa in this mess, whom both have reasons to want gone.

The inclusion of Hayabusa at all is the main and sole connection to Ninja Gaiden as a series, and the idea that this could have just as easily been a new property pervades the game just enough to constantly be at the back of your mind. Rudimentary platforming elements that might as well have been quick time events with how contextual they are break up the pace between fighting, which itself borrows its parts from most of its contemporaries except the series it’s actually spun off of.

While engaging the frequent rooms of cannon fodder zombies, and prevalent larger foes, Yaiba has a dash to move around, and three buttons to control his sword for quick slashing, huge cyborg fist for heavy attacks, and a chain sickle for area of effect. Healing is done solely through executing enemies in a significantly less skill based take on Metal Gear Rising’s Zandatsu system, though while that game had items and other ways to heal up and was thus more forgiving on screw ups, Yaiba leaves no such room. 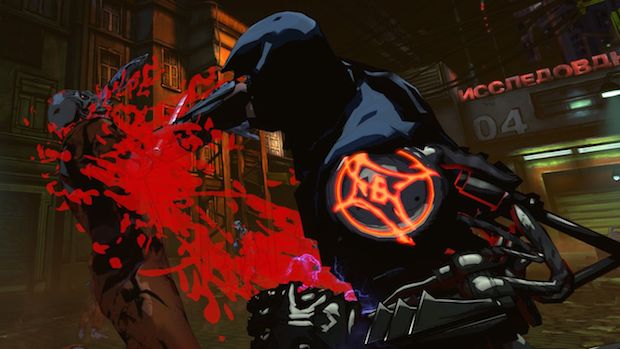 "There is a ton of fun to be had in the standard encounters with the hoards, but whenever the game asks a degree of precision it quickly descends into frustration and repeated attempts. "

Executions can most reliably be done on the goons, which are completely absent from many of the boss fights and larger enemy encounters, leaving players with no respite against the damage they will take from the hard to read baddies. There is a ton of fun to be had in the standard encounters with the hoards, but whenever the game asks a degree of precision it quickly descends into frustration and repeated attempts. Subtle strategy can be employed with a basic rock-paper-scissors element system at play, though this is typically more difficult to take advantage of than it’s worth and leaves itself mostly relegated to basic puzzle solving as a result.

Yaiba rather proudly touted it’s cel-shaded “living comic book” art style before release, and pulls it off admirably. While not exactly a technical marvel to accomplish, the fame rate stays consistent and the environments typically pop out in a fashion not often seen in games today. Overall, it’s very reminiscent of Borderlands, right down to enemy introduction cut-ins, yet it does so without coming off as a straight aping. "Ninja Gaiden Z is hardly a master of it’s craft, but it isn’t trying to be Ninja Gaiden proper either. "

About as much can be said about the writing in the game. While going into much detail would spoil some of the best moments to be found, The humorous dialog of Yaiba and the colourful cast around him provide some genuinely funny moments and overall keep the tongue in cheek environment consistent, and is one of the things the game simply nails. You never get the idea that Yaiba is taking itself seriously between the perverse gore, humor and undead shenanigans, and when you can laugh with the game, events can be laugh out loud hilarious.

Much like the relationship between Yaiba and Hayabusa, Ninja Gaiden Z is hardly a master of its craft, but it isn’t trying to be Ninja Gaiden proper either. Expecting a Ninja Gaiden game will leave players disappointed, but taking it on it’s own merits reveals an acceptable opening act.

Yaiba could really become something great with more polish and disconnecting himself from the Ninja Gaiden line. As it is however, players willing to stomach the frustrations beneath the surface should have a good time, just don’t feel bad about shambling over to it when it hits the bargin bin.

Bulky, hard to read larger enemies and an unforgiving lack of ways to heal lead to frustration. Elements are hard to take advantage of in combat.

Final Verdict:
FAIR
Yaiba unfortunately has the handicap of living in the shadow of Ninja Gaiden, but even taking it as its own things reveals problems and frustrations that pervade the game as a whole.
A copy of this game was provided by Developer/Publisher/Distributor/PR Agency for review purposes. Click here to know more about our Reviews Policy.