Posted By George Reith | On 04th, Apr. 2011 Under Reviews | Follow This Author @GNReith

It was about this time last year I started my staff position at Gamingbolt, and I vividly remember Yakuza 3 as being one of the first games I was sent in my position as a review writer. Fast forward a year and I’m sat here eyeing up my copy of Yakuza 4. It certainly carries the hallmarks of the series, but it was pleasant to see some of the issues I had with its predecessor being rectified. There are still definitely some bad habits that it hasn’t been able to break from however and, with its quirky style and hugely eastern influence, it will only appeal to a very certain kind of gamer.

In an attempt to alleviate the occasional repetition that has plagued previous games in the series, Yakuza 4 takes a very different narrative direction from that of its precursors. Though the game still primarily takes place in the partially fictitious representation of Tokyo’s Red Light District, Kamurocho, it opts for a four way split narrative rather than focusing solely on the continued adventures of Kazuma Kiryu. Fear not loyal Kazuma fans for one of the story segments revolves around him, but the other three are dedicated to our three new protagonist: Shun Akiyama who offers interest free loans for those willing to agree to his strange terms involving altruistic tasks, Taiga Saejima who is seeking revenge after his family have been usurped within the Yakuza following his long stint in prison and Masayoshi Tanamura who works for the police with a bizarre sense of justice and morality. 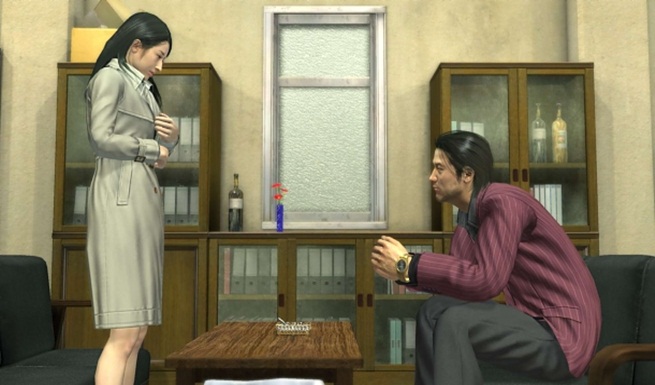 If it sounds a bit confusing keeping track of all these names, then that’s because it really is. This is one of the aspects where Yakuza 4 has some difficulties. The story in the Yakuza series has always been rich and complex, but the trade-off for this is that missing one instalment will make catching up with the plot a trying task. I thought that the new protagonists would make Yakuza 4 a good entry point for newcomers to the series, but alas this is not the case. The story in Yakuza 4 has some serious highlights, with tense moments, complex characters and appealing set-pieces regularly keeping you on your toes. The problem is that the game throws up many Japanese place names that western audiences may have difficulty grasping, and it also alludes to characters and events from previous instalments in the franchise that newcomers to the franchise will likely find confusing and alienating. There are the reminiscence cut-scenes you can view from the menu that fill you in on the proceedings of the previous Yakuza games, but there’s a hell of a lot of information you’ll need to soak up and its unlikely you’ll want to sit through the entire duration in one go if you’ve just started up the game. Yakuza 4 has a solid and entertaining narrative of a certain quality that many of our western titles are missing. Sadly, you have to engage the old grey matter to get the most out of it, and we all know that the average Joe is a little too lazy to bother with that if the current games in the chart are anything to go by.

Pushing the story forward is Yakuza’s gameplay, which is divided between fighting sections and exploration segments. The exploration of Kamurocho is what takes up most of your time and, though you can just consider it the way you get from A to B, the game world is absolutely jam packed with stuff to do. It might be some casual gambling in pachinko parlours, training up the hostesses who work in your bar as Akiyama, tracking down police leads on the side as Tanamura or one of the many other sub-stories that the locals will involve you in as you roam the town. There are also more persistent side-quests that dot the city, namely the search for keys that open the mysterious sets of item-filled lockers around the city. You’ll be unlikely to find yourself with nothing to do at any time during Yakuza 4. 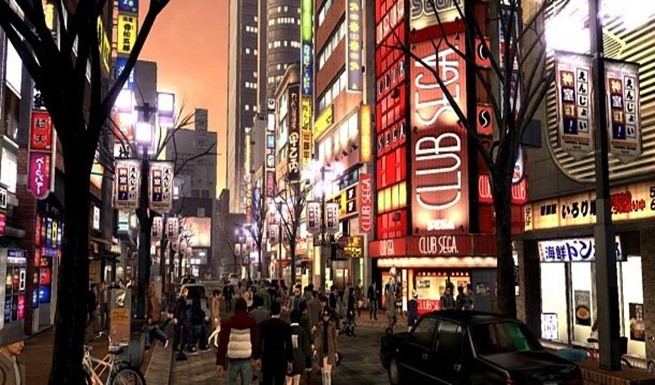 Kamurocho looks as detailed and vibrant as ever

Even if you choose not to engage in the game’s many side-quests, the district of Kamurocho still manages to feel like a living environment that works around you due to Yakuza 4’s impressive visuals. The game world is detailed in terms of both mechanics and visuals, with the new rooftop and underground sections of Kamurocho providing a needed variety to the same streets we’ve seen in all the Yakuza games. The textures and environments haven’t progressed much since Yakuza 3 (not that they had much improving to do considering how nice Yakuza 3 looked) but it is good to see character models getting a major upgrade. One of my big problems with the previous Yakuza game was that the running animations during the game’s exploration sections looked wooden and low budget, but this problem has been well rectified with all animations now looking silky smooth. Its games like this that remind me of what the PS3 is truly capable of.

As you plough through the game’s story you’ll find yourself having to fight through a variety of different conflicts; rather obviously considering how wound up the game is in yakuza culture. The combat plays out in an easy to pick up kind of way, with the standard square for light attacks and triangle for hard attacks control set-up. Whilst this simplicity is part of what generates the thrills of the game’s combat, there is no doubt that the basic and repeating combos soon become tiresome. 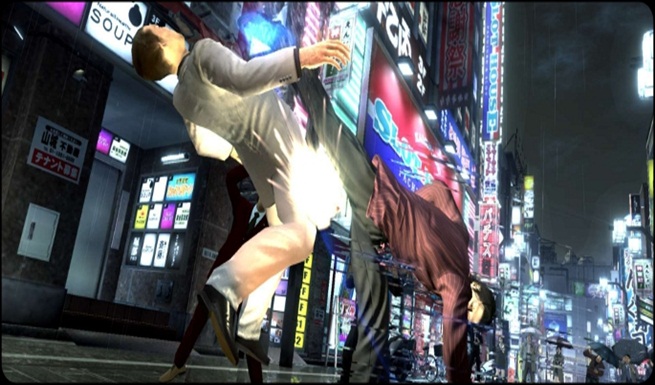 The combat is fun to begin with, but you’ll start to see yourself relying on the same moves constantly

There is thankfully more to the proceedings than initially meets the eye. You have a heat gauge accompanying your health bar that fills up as you fight well and lowers if you are hit or wait too long between combos. When filled you can perform powerful heat actions, provided you are in the right conditions to perform the moves. The heat actions are varied and satisfyingly gory though some of the contexts you need to pull off the more advanced ones are quite tricky, meaning you’ll find yourself relying on the same few time and time again. You can gain new heat actions by levelling up. You gain EXP as you fight and explore Kamurocho, and levelling gives you points that you can invest in a variety of active skills and passive feats. It’s also a nice touch to see each character having separate skills they can learn and use in combat. It definitely helps keep the combat fresh as you change between characters in the narrative. The only major gripe I hold with the levelling system is that the skills you can learn are almost identical to those found in Yakuza 3. Sure there are a few new names in the list, but it largely felt like I was experiencing some serious Deja Vu. There are also a variety of weapons you can craft and find in the game’s map for use. There is an enjoyment in the brutality of slaying a guy with a traffic cone but, again, there aren’t many new weapons we haven’t seen in Yakuza 3.

Part of the game’s satisfaction in combat comes from the peppered use of some strong sound effects. The music too lends to the game’s strengths with its catchy melodies, even if it does sound a bit too much like your standard J rock and metal tracks. The voice acting also deserves some praise but, with it only being available in Japanese with subtitles, there are some less culturally accepting gamers who will be put off by this. There is also the continued irritant of many scenes suddenly dropping the voiced dialogue and descending into just text. The fact that most of these text scenes also contained a lot of awkwardly translated “engrish” furthers the notion of a sudden drop in production values. When the voice acting is of such a high standard, it makes no sense for it to cut out so regularly during the course of the game. 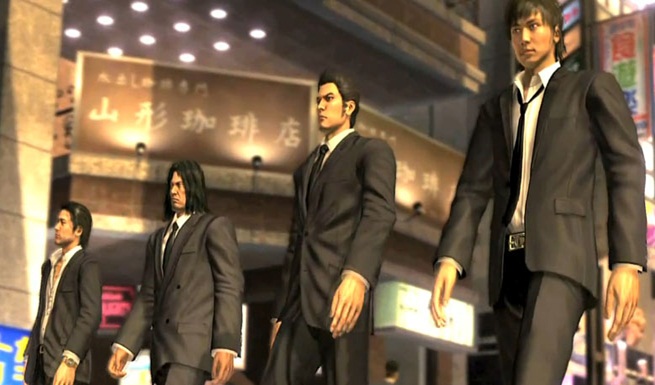 The boys are back in town

If I had to describe Yakuza 4 in a single phrase, it would have to be “frustratingly impressive.” The game’s visuals, attention to detail and tightly packed story all shine in a sea of mediocrity that tends to wash over many of our top selling games at the moment, but there are so many other more annoying elements of Yakuza that prevent it from being an instant classic. For every engaging side-quest you happen to stumble across, there are an infinite amount of random street thugs engaging you in repetitive street brawls. For every dramatic moment of meaningful story exposition, there are random text based conversation with an amateurish school boy translation. I have a certain affection for any game that takes its storytelling seriously, and Yakuza 4 is such a game. If you want a solid narrative with tonnes of content on disc and can put up with the frustrations, or if you’re really hankering to get more of the same Yakuza action, then consider Yakuza 4 worth picking up. If you’re the average gamer who can barely be patient enough to sit through a loading screen, then this game will prove too slow paced for your liking.

Hard to understand for newcomers to the series, Obscure references make some sections confusing, Occasionally “engrish” dialogue, Many sections don't have full voice acting, Combat can get repetitive, Very similar to its predecessors

Yakuza 4 fills a unique, albeit obscure, gap in the market with its story driven open world martial arts gameplay. Some repetitive game design and occasionally confusing plot threads prevent it from reaching its full potential

A copy of this game was provided by developer/publisher for review purposes. Click here to know more about our Reviews Policy.
Tagged With: ps3, Sega, yakuza 4