Yooka-Laylee is a game purely wrought by the roots of Rare’s Banjo-Kazooie, and the developers at Playtonic Games want to let that fans know that they are passionate about third-person action-adventure games, and that there’s still a place in this period of gaming that this genre can succeed. They’re right. At least from what I experienced at this year’s PlayStation Experience. I finally had a chance to get my hands on the colorful adventure of Yooka-Laylee and figure out just how far this genre has come since the Banjo-Kazooie games from the Nintendo 64 generation.

Right away the game shows off its whimsical world built around talking objects, vividly bright colors, and a world that looks incredible from every angle.

It’s obvious that this game has its entire being severely wrapped around the ideals of Banjo-Kazooie – almost obsessively. Sure it has a few of the developers from the Banjo team, but in some ways it almost feels desperate for something fresh. The creatures have that same garbled, non-articulate language of jumbled sounds for voice overs that will be a major callback to its spiritual predecessor. The main characters Yooka — a neon green chameleon — and his sidekick Laylee — a funny, purple bat –, are nothing more than the bear and bird themselves audaciously different, of course, to differentiate itself from Banjo-Kazooie. 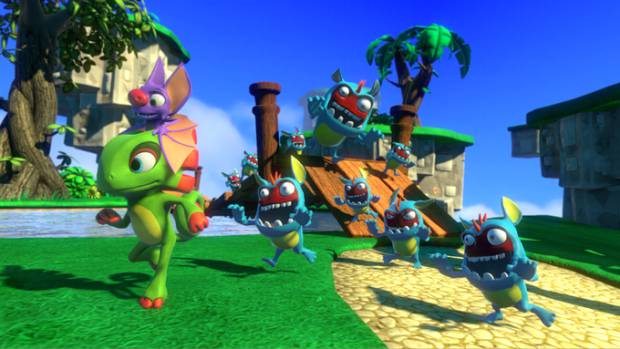 "Most, if not all, of these moves can be found in Banjo-Kazooie and other games from the same era. There’s nothing really to see that’s new, but to just experience the game’s graceful and grand level design."

Furthermore, the personalities of each protagonist is nearly identical to those of Banjo and Kazooie. Yooka is a soft spoken and gentle creature that wants to make his way through any given situation with as little hostility as possible reminiscent of Banko. While, Laylee, on the other hand, wants to be sassy — which is a mirror image of Kazooie herself.

Yooka is equipped with abilities to help thwart enemies such as his spin-dash that allows the chameleon to somersault for long distances (much like Sonic the Hedgehog). A tail spin lets Yooka spin around sideways and melee enemies with his green, curly tail. Laylee has moves that help Yooka out as well, such as raising him into the air for a larger jump. Most, if not all, of these moves can be found in Banjo-Kazooie and other games from the same era. There’s nothing really to see that’s new, but to just experience the game’s graceful and grand level design.

The open-style level design allows Yooka to travel around while completing mini games and finishing up tasks some of the animal creatures ask him to do all around the vibrant land. From climbing pillars and rock formations, to traveling over broken bridges and dense jungles, there is a whole lot of clever level design in the small demo. Not having to do certain tasks in a restricted order meant that I could spend my time looking around and going where I want. Unlike other games that sort of demand a layer to be finished before moving on to any place else, Yooka-Laylee allowed me to spread my wings and enjoy the sites before the ride. 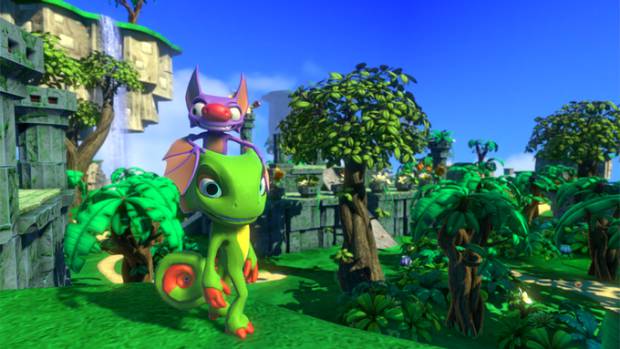 "The speed and agility of Yooka is quite impressive and the controls couldn’t be any smoother. Racing down dirty pipes, or banking around stone slabbed corners was impressive and fun."

Yooka-Laylee strives in its platforming layout as well. Getting from one point to the next is incredible, entertaining, and rewarding. Though the demo was just that, a demo, there wasn’t a lot in terms of collectibles, but I could tell that there was still a lot of empty space within the frames where it felt like objects were still needed to be added. It was a bit of a let down, but I am assuming it will be ready by launch.

The speed and agility of Yooka is quite impressive and the controls couldn’t be any smoother. Racing down dirty pipes, or banking around stone slabbed corners was impressive and fun.

Overall, Yooka-Laylee is a game that feels completely obsessed with Banjo-Kazooie. In a way it’s a matter of discussion to see a studio with their minds wrapped around such a simple concept and forget to make a game their own, but on the flip side, it’s fun to finally get another action-adventure platformer that plays as smooth — and sometimes even better — as the game it’s practically inspiring from. It will be nice to see how far this game comes when it’s near completion, because right now it is a lot of fun. The freedom is there, the expectations are being met, so hopefully this entire experience turns out to be some good old fashioned fun.