Working on it’s fandom appeal and an accurate portrayal of TV series, Young Justice: Legacy relies on such in order to witness it’s enjoyability.

Starting off at the Young Justice headquarters where our favorite team of teen-heroes are being briefed by The Batman. You are thrown into a team-trio of Knightwing, Artemis, and Kid Flash, then sent of to an archaeological dig located close to Olympia to look into the kidnapping of an archaeologist. From here on out the game follows the same fashion to most television shows that games are based on.

Young Justice: Legacy plays out as one long episode of the series will all know and love, and its supporting cast is pretty entertaining. Kid Flash is quirky, Aqualad is too serious, and Superboy is to chilled to care. The characters represent their TV counterparts superbly well and the transition from one medium into another where most would generally crash and burn, isn’t that bad here. 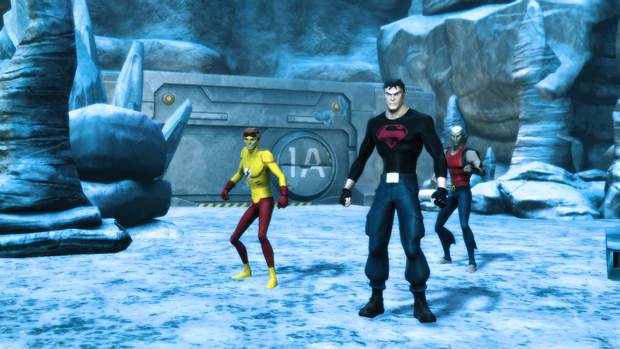 "Villains such as Cheshire, Sportsmaster, and Killer Frost pick up the slack and provide more enjoyability over the mediocre henchmen in the game, but more variety would have been welcomed."

Before initiating a mission the player is free to select a team of three from the heroes that are currently available. Each team member has their own on-screen HUD indicating their traits such as health, energy, and power, which is displayed when picking your team mates. Characters are unlocked as you progress through the game and come with a selection of costumes to choose from, assuming you’ve taken the necessary steps to unlock them. All characters from the television show are present here and do well to match their appearance, attitudes, and traits as seen on the show.

Noticeable villains make their way onto the set as enemy boss battles, while generic ninja knock-offs taken from Stephen Sommer’s G.I. Joe fill out the roster of killing time. As with most games of this type that are geared towards younger audiences, repetitive combat is a given. This is something you better get used to as variety is at an all time lacking, especially when playing the game in single-player. Villains such as Cheshire, Sportsmaster, and Killer Frost pick up the slack and provide more enjoyability over the mediocre henchmen in the game, but more variety would have been welcomed.

When you’re not taking part in a mission you are free to explore the team’s headquarters and speak to members of the Justice League. There’s not much to see or discover in the team’s headquarters, it’s a simple room that works as a base for accessing training missions, main missions, and character customization options. There’s also a fun trivia to take part in that throws a series of questions at you based on the TV show, as well as general knowledge from the DC comics universe. It’s kind of like DC’s answer to Mortal Kombat’s Test Your Might. I spent quite a bit of time coming back to this and it’s a nice addition and a good change of pace. The base itself is identical to the show but purposely lacks freedom and exploration as it’s not an important factor of the game. 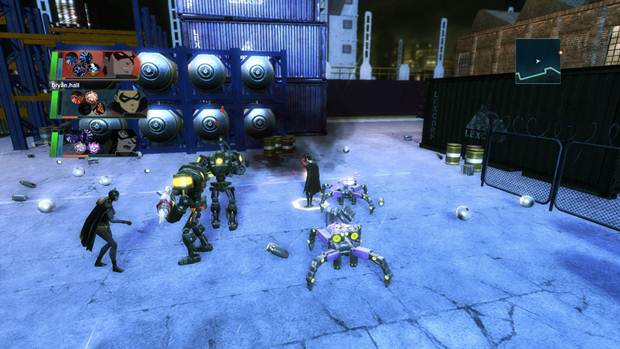 "With the optimization techniques available on the console platform, the reason behind the graphical hiccups that this game suffers from is beyond me, not to mention embarrassing."

As you are tasked with controlling a team of three by which you can switch back and fourth from, Young Justice handles this aspect of the game very well. Unlike most games of co-operative nature where you’re left steering all members of the team when a human companion isn’t available, the computer A.I. didn’t suck. It wasn’t noticeably helpful but none of my team mates suffered at defending themselves, they attacked and held their own. Where most games of this nature would have you’re A.I. team mates taking part in what I like to call the “Gorgon Showdown” meaning that they behave as if they’ve gazed upon the eyes of Medusa, and are to stiff to take part in the action. I was quite satisfied with their contribution and had no problem when playing in single-player.

In an era where the majority of games only contain human involvement through the means of an online multi-player, I’m always pleased to see games that integrate co-operative gameplay locally. Young Justice: Legacy is a perfect game for this and will undoubtedly bring fan-boys and fan-girls of the DC Comics together, as well as those with an initial attraction to the game.

Young Justice: Legacy is without a doubt a fun and pleasing game, and it does well to satisfy its fan base and younger audiences, but it isn’t exactly the best looking of games. With the optimization techniques available on the console platform, the reason behind the graphical hiccups that this game suffers from is beyond me, not to mention embarrassing. Frame rate drops, glitching cut scenes, and blurry textures presents this game as a mess. The only attraction it visually holds is in its representation of the characters. 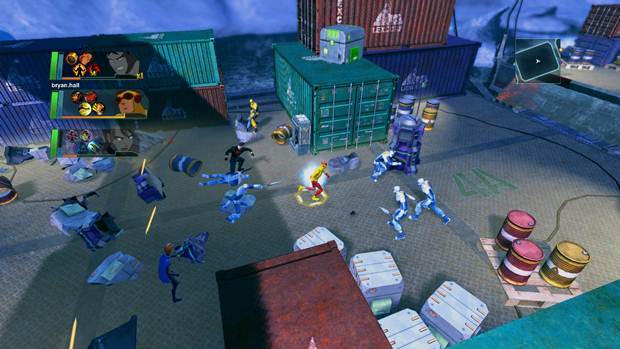 "Young Justice: Legacy seems to be another one of those games that fall victim to the idea that catering its control method to suit younger audiences, is an excuse to throw away fun and enjoyable combat, and replace it with dull, repetitive, four hit combos that you're left to repeating two to three minutes because there's nothing else available."

It doesn’t help that the game’s camera pulls away from the character at times in order to show off its environments, when the game isn’t that pleasing on the eyes to begin with. In a game that’s by no means graphically intense I had to question the screen tearing that was present. None of these issues are by any means game breaking but when they’re all together it becomes something that’s noticeable.

Young Justice: Legacy seems to be another one of those games that fall victim to the idea that catering its control method to suit younger audiences, is an excuse to throw away fun and enjoyable combat, and replace it with dull, repetitive, four hit combos that you’re left to repeating two to three minutes because there’s nothing else available. With the exception of Super-Power abilities which are initiated by holding down the top bumper in combination with one of the attack buttons, fighting becomes tedious and boring.

The only real joy I received from the game’s combat was in my own curiosity to see what each character can do, and how well it stays true to that character’s personality and abilities from the TV show that it’s based upon. Although the game doesn’t emphasize any character classes per say, anybody familiar with the heroes or the series will know what they’re getting themselves into when selecting the team. Superboy’s fighting techniques work on the advantage of his strength, Kid Flash is based around speed, and Artemis uses her bow for the majority of her attacks. 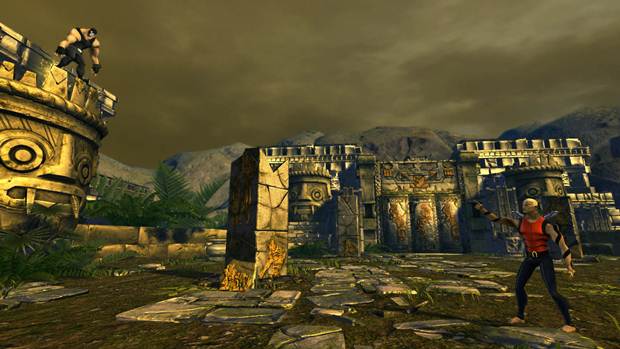 "With its lackluster graphics and combo-less control mechanics, Young Justice: Legacy would be more appealing had it been developed for a tablet device rather than a console."

The best way to describe the combat in this game is that it feels like a dumbed down version of DC Universe Online. The only problem with this is that, DCUO is an MMO, where in-depth combat and memorizing different attacks patterns from your enemy isn’t as much of an important factor when you’re picking your attack, rather than directly attacking in a game such as Young Justice.

With its lackluster graphics and combo-less control mechanics, Young Justice: Legacy would be more appealing had it been developed for a tablet device rather than a console. Frankly, it would have been more impressive in that form, and if not for enjoyability, then just for the sake of exploiting the graphical capabilities of modern day tablets and mobile devices.

Young justice: Legacy is a perfect example that no matter how much you may love something growing up, if it hasn’t adapted to your maturity later on in life, you will ultimately fail to enjoy it and see it its fullest potential as it may in fact be a work of amazement. With that being said older audiences may have trouble in enjoying a game which is actually quite entertaining, regardless if they’re fans or not.

Comic appeal and kid curiosity is where Young Justice holds the majority of its strength.

Graphical horrors and tedious combat make the game fall flat, because of its faults it's easy to see its potential.

Despite the faults that hold the game back from being something of greatness, it's worth the experience. Three-player co-operative gameplay lends the game a helping hand in delivering an element of entertainment, but tedious combat is forever present from start to finish.