XFX HD 5970 which is the world’s most powerful graphics card is now being sold through an auction at Ebay. This morning the auction started out at $50,000 but now it has sky rocketed to $1,000,000. This graphics card is one of the most anticipated gadgets this year and the catch here is it is not even released, which makes one wonder that it was bought using illegal means. 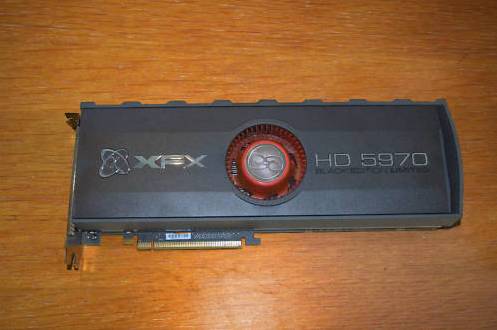 The world's most powerful and obviously the most expensive graphics card!

At the Ebay page the card is described as:

Since the lack of sales record on my personal account Demon0fthefaII my post was taken down.
I am now forced to re-post this on my friend’s more reputable account.

Here is the same info that was posted on the original item as well as a lot more information I found out about this card!
Thanks for all your questions on the last post I tried to cover all of them in this new description.
You have no idea how hard it was for me to get this card.

I don’t even think it has an official release date yet!

I don’t have a box, packaging, user manuals, or even drivers but I am sure they will be released online soon. It does come with a pretty awesome GUN CASE though…

They are only making 1,000 of these cards so chances are you will never get your hands on one and even if you do its going to cost you well over $1,000.

I also have this stuff that will come with it.