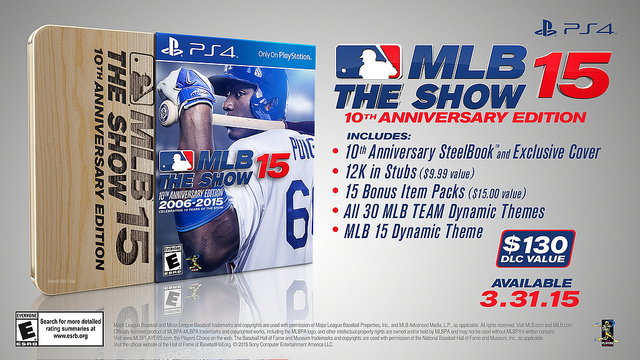 Sony San Diego has revealed a special 10th Anniversary Edition for their upcoming baseball game, MLB 15 The Show, to celebrate ten years of them making the baseball games for PlayStation game platforms. The Anniversary edition is $69.99 and for the extra $10 dollars in price you receive $130 in added bonus content.

In addition to all of this, by pre-ordering MLB 15 The Show digitally on PlayStation Store or at various retailers, you can receive a free voucher for a DualShock 4 Skin for the MLB team of your choice from Skinit.

The special Anniversary Edition is actually available for pre-order right now at all leading retailers and the PlayStation Network Store. The game itself is due to launch on PS3, PS4, and PS Vita soon, so stay tuned for more coverage.