An evil stirs in the kingdom of Dotnia and, as the descendant of the legendary hero, it is up to you to find the six magical orbs that can seal the evil that may befall the land. If this doesn’t remind you of every other adventure game of the past twenty years then you’re either: Not a gamer, or exceptionally unobservant. But before you write 3D Dot Game Heroes off as a derivative piece of trash, you need to understand that the clichéd nature of it is sort of the point.

This becomes most apparent in the visuals, as reading about it doesn’t quite convey the sense of humour the game has. The visuals begin looking like a carbon copy of the original Legend of Zelda, but when the king of Dotnia realises the tourist trade is losing out due to the 2D nature of the land, he decrees it become three dimensional. Thus we get to see the sprites become 3D models before our eyes and the pixelated, yet smooth visuals becomes apparent. The artistic flair and unique style cannot be truly expressed properly in words. The technical aptitude of the visuals is also noteworthy, with the water and bloom effects being particularly impressive, if a little on the extreme side. It is obvious right from the start that the visuals are a major strong point of the game. 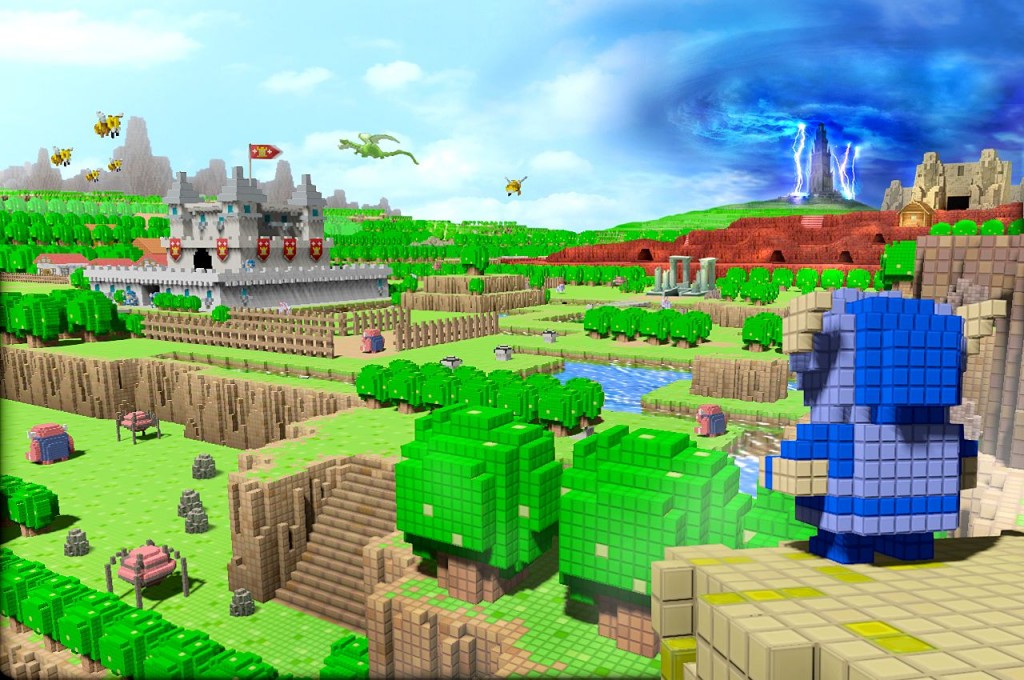 It might not have the stunning visuals of Crysis, but the graphics have an undeniable charm

Regardless of how you look at it, it’s clear what is influencing 3D Dot Games Heroes. This becomes even more obvious when you pick up the controller. The gameplay resembles the adventure game paradigm made most popular by the top down 2D Legend of Zelda titles. This means the engine of 3D Dot Game Heroes will be familiar to most of you. The combat is a simple one button affair, but provides an enjoyable experience, even if it is a little shallow. The rest of the package is also implicit with challenging and puzzle-ridden dungeons, along with a vast world to explore. It’s an entertaining setup with a retro charm, that fills a gap left in the genre by the lack of 2D titles being released on this console generation. There are a few other nice touches that attempt to break from the usual mould as well. There are multiple swords for you to collect throughout the game that can be upgraded in various ways at the local blacksmith. It’s not exactly an innovative feature, but it always brings a smile to your face when you’ve improved a sword’s size to the point where it fills the whole screen. (I wonder what Freud would say?) Another feature of note is the character creation. Seeing as the graphics are made up entirely of pixels, the visuals lend themselves toward user generated avatars. The creation tools are fun and easy to use, if a little too restrictive in the limited amount of colours available. Regardless, the artistically inclined of you will find a great deal of enjoyment to be had in this feature.

The retro charm is an immediate success and the game does an immaculate job of mimicking the staples of the genre, unfortunately for worse as well as better. The combat is enjoyable in its simplicity, but there are many occasions where it feels a bit on the spongey side and generally lacking in depth. This lack of depth can also be seen in most aspects of the game and it often gets to the point where you no longer feel compelled to play. This is probably one of the biggest flaws with 3D Dot Game Heroes. The other key thing that may put you off the game’s core mechanics is just how similar it is to Zelda. I know I’ve been playing that card a lot but there’s no way around it. From the characters, plot and dialogue to the weapons and side-quests it’s almost identical. The thing boarders on plagiarism and, whilst this might be too much for some people, at least 3D Dot Game Heroes is stealing from the best. 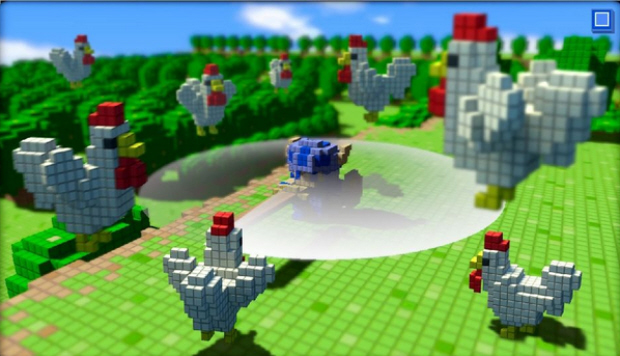 Spin Attack? Cuckos? In what game have I seen these two things before? hmmm…

One way that 3D Dot Game Heroes is able to create it’s own identity is through the sense of humour. It plays off enough conventions throughout the story to bring a smile to the face of the more hardcore gamer, and the amount of referencing is endearing and always comical. From Final Fantasy 4 to Demon’s Souls, your favourite title is bound to get a nod, whether it’s old or new.

With all the classic titles that are being harked back to, the design of 3D Dot Game Heroes needs to be solid so it can sustain the hefty weight of the genre heritage it’s built upon. It’s able to do this for the most part. Seeing as it’s an adventure game, the levels you adventure in need to cut the mustard. Both the dungeons and the world map are fun to explore and hold many secrets and entertaining side-quests, but the design seems to adhere too much to a paint by numbers approach. You have a fire temple and a water temple then a stone temple etc. I guess based on the game’s affectionate use of cliché I shouldn’t have expected any less, but it would have been nice if a bit more effort was put into the map design. The side-quests the world contains are worth a mention for being numerous and often relevant, even when they are just elaborate fetch quests. It becomes frustrating though in that a large majority of them are timed. You think you have the time to come back and deliver that pendant later, but after you finish the next dungeon the quest-giver will just up and vanish! It’s not the end of the world, but completionists need to be warned that a guide will be necessary to obtain 100% on your play-through.

If the game hasn’t already delivered enough 8-bit goodness then just wait till you hear the audio. The whole affair is vibrant and in keeping with the game, but mimics older game background music and sound effects to the point where I’m amazed the game got through without some kind of lawsuit. Regardless of their clichéd nature they are able to raise a smile and suit the game perfectly. It’s just a shame that the BGM can become very tedious and repetitive over during the course of the adventure.

A character creator is included so you can make your hero as creative (or un-creative in this particular case) as you want!

The not so compelling nature of the game’s simplicity may be a deal breaker for some, but for those willing to truck on regardless you’ll get your money’s worth from 3D Dot Game Heroes. The main quest is a good twelve hours in length, but you can easily add a couple of hours to the total if you fancy yourself as the kind who would indulge in the game’s numerous side-quests. The character creation tools as well will keep those with a creative desire trying out new pixel combinations for some time. The linearity of the experience is a problem in that multiple play-throughs will yield little new content, and the bland nature of the trophies is a shame. Regardless it’s clear from the get go that 3D Dot Game Heroes will provide enough entertainment to justify the price tag.

Despite ripping off every cliché in the book, 3D Dot Game Heroes is able to hit a particular spot of mine that no game has scratched in some time. The gameplay may be a bit too derivative, but the unique art style and retro dialogue will charm almost anyone old enough to remember the 8-bit generation. The Bottom line is that if you liked the 2D Zelda titles then you won’t go too wrong if you pick up a copy of 3D Dot Game Heroes.

Disappearing side-quests are a source of frustration, The audio is quite bland, Possibly too much like Zelda for its own good. Can get repetitive

Final Verdict:
GOOD
Welcome to Dotnia: A land where modern graphical prowess unites with old school sensibilities to produce a caring love letter to the great adventure games of yesteryear
A copy of this game was provided by Developer/Publisher/Distributor/PR Agency for review purposes. Click here to know more about our Reviews Policy.