Finn and Jake return with the appropriate amount of hype.

Anyone who’s anyone has heard of Adventure Time, the hit animated series that successfully blends meta humour with utter weirdness and childlike sensibilities. Finn and Jake have been fairly regular in the gaming world as well with efforts like Explore the Dungeon Because I Don’t Know! and The Secret of the Nameless Kingdom and they’ll be returning with Vicious Cycle’s Adventure Time: Finn & Jake Investigations. There’s plenty we’d like to know about the game especially with regards to how its detective motif fits into the action adventure genre. 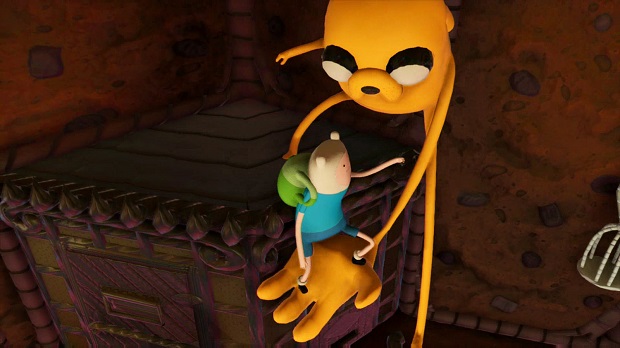 "The game is mostly a traditional adventure game, but we’ve added an element of combat that lets you take Finn and Jake into battle against a variety of enemies."

Rashid K. Sayed: The game will focus on adventuring and puzzle-solving but we’re interested in the investigative aspects. How will Finn & Jake’s detective methods work here?

Dave Ellis: The game is very much a traditional adventure game. The “investigations” are mysteries and crises throughout Ooo for our heroes to solve. At the start of the game, Finn and Jake find the “tickertype” machine that their parents, Joshua and Margaret, used to use when they ran their own detective business (as seen in the sixth season episode “Joshua and Margaret Investigations”). When the tickertype starts printing out new mysteries to solve, Finn and Jake can’t resist the urge to investigate.

Rashid K. Sayed: Adventure Time: Finn & Jake Investigations will release across a wide variety of platforms. Will there be any noticeable differences, particularly when it comes to the handheld versions?

Eric Peterson: Our technology, the Vicious Engine, was built for cross-platform game development across generations of hardware. Therefore, we can take the gameplay on the current gen systems and propagate it to the previous generation, handhelds and PC. Graphically speaking, the latest systems will have more triangles, detailed textures, normal maps, spec maps, shaders and dynamic lighting while also running at higher resolutions and frame rates than previous generations.

Rashid K. Sayed: The ability to earn different drops leads us to believe there will be some RPG elements in Adventure Time: Finn & Jake Investigations. What will they be and how do they impact the overall gameplay?

Dave Ellis: The game is mostly a traditional adventure game, but we’ve added an element of combat that lets you take Finn and Jake into battle against a variety of enemies. The player earns treasure for combat, the amount depending on how skillfully and creatively he fights—how many times he gets hit, how many hit combos he manages to perform, and so on. Landing successive combos in battle allows the player to use a variety of special Jake battle forms to really lay the beat down on the bad guys.

There’s no real RPG leveling in the game—but, if the player is really successful in combat, he can unlock a variety of swords from the show, each of which has special combat abilities with powerful and fun new effects. The treasure the player wins in combat accumulates in the Treasure Room of Finn and Jake’s Tree House. 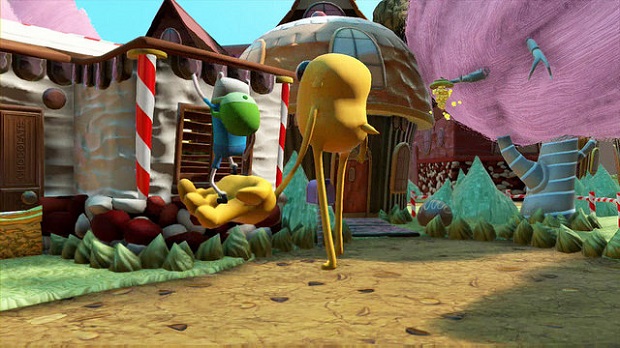 "The setting time frame-wise is during the sixth season, but players who aren’t aren’t familiar with the show won’t have any trouble getting into the game."

Rashid K. Sayed: Which characters can we expect to appear in Adventure Time: Finn & Jake Investigations?

Dave Ellis: We have over 20 different characters in the game. Favorites like BMO, Ice King, Princess Bubblegum, Lumpy Space Princess, and Flame Princess all play major roles in the various storylines. There are also a lot of other characters who are both fan favorites and personal favorites of the Vicious Cycle team. We felt it would have been UNACCEPTABLE to leave certain characters out of the game. There are plenty of folks to meet and talk to as you explore Ooo.

Rashid K. Sayed: How long will the main quest last and will there be any additional modes to keep players busy afterwards?

Dave Ellis: There are five different separate stories (investigations) in the game, each of which plays out like an episode of the show. Each episode takes the player about 2-3 hours to complete. After the entire game is completed, it is likely that the player will be able to replay individual investigations. Also, all combat segments are replayable, so the player can repeat a combat to get a better rating and get more treasure/rewards. The player can also explore the Tree House between investigations.

Rashid K. Sayed: Being loosely based on the show’s sixth season, will players unfamiliar with the TV series be able to get into Adventure Time: Finn & Jake Investigations?

Dave Ellis: All five investigations (and the overarching story that ties them together) are original stories that stand on their own. The setting time frame-wise is during the sixth season, but players who aren’t aren’t familiar with the show won’t have any trouble getting into the game.

Rashid K. Sayed: Tell us more about the game’s story and how it ties into the show’s sixth season.

Dave Ellis: You could think of the five investigations in the game as five different (but related) episodes that take place in the midst of the sixth season timeline. Because places, characters, and situations have evolved over the course of the show, we had to choose a reference point for our story and we wanted it to be relatively current for those fans who are familiar with the show.

There are references to situations from the sixth season (and the preceding seasons), as well as one or two Easter Eggs referring to future episodes, but the stories are purposely stand-alone tales that don’t require the player to have intimate knowledge of the show in order to enjoy. 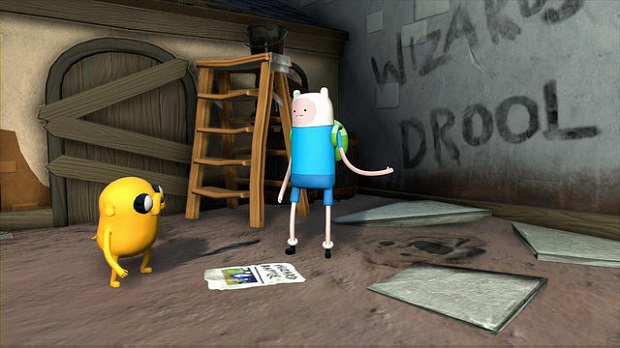 "Our goal is to reach as many fans of the series as possible and one of the best ways to accomplish that is to provide the game on numerous platforms across many territories worldwide."

Rashid K. Sayed: Adventure Time: Finn & Jake Investigations will be the first game in the series to be in full 3D graphics. How did you handle the process of translating Adventure Time’s memorable 2D art style into the third dimension?

Eric Peterson: With great care actually! We have quite a few Adventure Time fans on our staff and if something doesn’t look right, we hear about it. Therefore, we have taken a lot of time to properly translate the assets into the third dimension. Our care is evident as you wander through the Adventure Time environments and meet all the characters.

You will especially notice this artistic effort when perusing Finn and Jake’s Tree House where some of the tiniest details and items have been included for fans to see and interact with. I believe fans of the series will appreciate the attention to detail that we have included in our game while staying true to the show’s clever and unique style.

Rashid K. Sayed: How much work went into making sure this felt like an Adventure Time game rather than an action adventure title with the Adventure Time name and characters in it?

Dave Ellis: We purposely chose the graphic adventure model for the game because we felt it best fit the Adventure Time license. Although there is action and fighting in the show, the thing that makes it so much more than an ordinary cartoon is that there are really deep relationships and themes. So much of the show is about Finn and Jake interacting with people and finding ways to solve their problems. Adventure games are built on interactions and problem solving.

A lot of work also went into the story and the script. We have over 6000 lines of dialog in the game, and the original cast is doing the voiceover work. We’ve pulled out all the stops to make the player feel as if they’re actually playing episodes of the show.

Rashid K. Sayed: The game is coming numerous platforms. Was there a specific reason why you guys are not developing only for current gen consoles and PC?

Eric Peterson: Our goal is to reach as many fans of the series as possible and one of the best ways to accomplish that is to provide the game on numerous platforms across many territories worldwide. 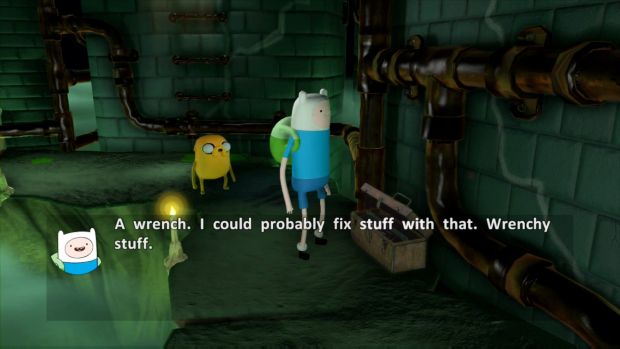 "Working with the Xbox One can be challenging at times because it uses eSRAM compared to the PS4’s unified memory. This can cause minor issues managing render targets..."

Rashid K. Sayed: Is it safe to assume that the game will run at 1080p and 60fps on the current gen consoles?

Eric Peterson: We are in the process of determining what resolution and frame rate the game will be at this time. Our preference however, would be to provide a higher visual fidelity verses a faster frame rate. With a classic adventure style game, we don’t feel the frame rate is as vital to the game as the quality of the visuals, so we wouldn’t want to sacrifice them for the extra fps.

Rashid K. Sayed: Did you face any challenges while working on the Xbox One version, including the eSRAM?

Eric Peterson: Working with the Xbox One can be challenging at times because it uses eSRAM compared to the PS4’s unified memory. This can cause minor issues managing render targets, where some post processing render targets end up within the slower memory on the system. With enough time, it is something that can be ironed out to ultimately achieve better performance.

Eric Peterson: I think like with any consoles, they have their strengths and weaknesses. Even in previous generations, there were quirks and unique distinctions between systems and therefore developers preferred one console over the other. Frankly, I don’t think those opinions will ever disperse and they will continue to permeate the consumer mindset as well.

Dave Ellis: Adventure Time: Finn and Jake Investigations is definitely a labor of love here at Vicious Cycle. We love the show and we love the characters, and we’ve set out to make the most immersive Adventure Time game experience to date. We hope all of the fans of the show—and adventure game fans in general—enjoy playing the game as much as we’ve enjoyed creating it.