One of Agatha Christie's most compelling literary works comes to PC and consoles, is it a hidden treasure or just another red herring?

From the pages of Agatha Christie’s works comes arguably one of the greatest minds in criminal investigation, Hercule Poirot.  Having starred in over thirty novels and over fifty short stories, it is little wonder that he should serve as the chief protagonist in which The ABC Murders takes place. Using Poirot’s keen mind (and sometimes even your own), you’ll examine crime scenes, question suspects, discover clues, and unravel the mystery itself.

If the idea of stepping into the shoes of the famed Belgian detective is a little intimidating, it shouldn’t be.  The puzzles, ranging from figuring out secret codes, to manipulating objects are hardly challenging and for the most part, are pretty straightforward and can be completed without much trial and error.  It’s nice that such puzzles aren’t overly challenging, in order to move the narrative along, but at the same time, they feel unworthy of the great investigator; sort of like donning the mantle of Sherlock Holmes and then attempting to figure out who stole the last loaf of bread from the kitchen, with a trail of breadcrumbs leading directly to the culprit.

Luckily, there are a number of things keeping you and Poirot busy in between solving puzzles.  Examining crime scenes involves different “phases” where you walk around freely, and on points of interest you zoom in, and begin “observation” phases, where you attempt to notice several important details about the scene or object.  You can go into observation mode on various suspects and other characters in the narrative, in an effort to determine their behavior, and/or if they’re being truthful, or hiding something. 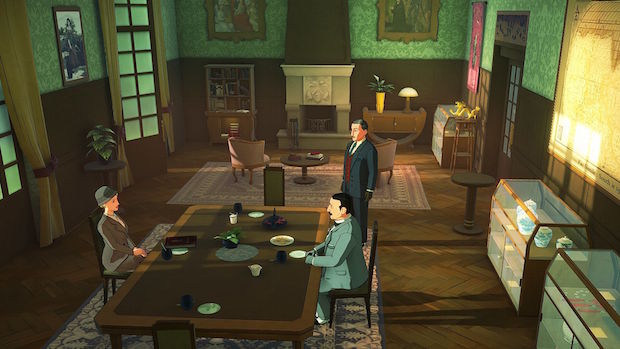 "At the end of each case, you’ll enter a “reconstruction” phase, where you attempt to reconstruct the crime, based on the clues and evidence you’ve collected so far."

The “thinking” phase begins when you examine an object that you can manipulate, such as a small desk clock with a false bottom that can be slid away, or a combination lock that you can rotate the dials on.  Finding tangible clues or evidence in this phase often leads to the “little grey cells” phase where you go over all the clues and evidence you’ve recently collected, and attempt to make sense of it by associating the important pieces of evidence with specific questions pertaining to the specific crimes, such as time of death, or motive for the killing, etc.  This is one of the nice touches from the novels, in which Poirot often refers to his “little grey cells” as his brain.

At the end of each case, you’ll enter a “reconstruction” phase, where you attempt to reconstruct the crime, based on the clues and evidence you’ve collected so far.  The crime plays out in muted sepia tones and you select from a few different options at certain points, based on the facts you’ve collected.  If you fail to choose the correct option at any of these points, you’ll have to start the scene over,

The three cases are all interconnected and you’ll also find overlapping evidence, or clues present from one investigation that will appear in the next.  If you get stuck on a puzzle or just not sure where to go or exactly what to do next, there’s a handy “use a clue” button that will solve whatever puzzle you’re currently working on or point you in the right direction if you’re totally lost, however it has a cooldown of about one hundred seconds; also it won’t completely solve every puzzle for you, some things you’ll simply have to work out for yourself.

As Poirot, you’re more than well equipped to solve any mystery, but you also have several companions who provide narrative context, as well as differing perspectives on the cases and evidence.  There’s Poirot’s trusty sidekick, Captain Arthur Hastings, who Poirot describes at one point as “entirely too optimistic,” and the always overworked and stodgy Chief Inspector Japp.

You also acquire “ego points” for behaving in a manner consistent with Poirot himself, earning a greater number of points for your skill at Poirot-city, if you will.  Sadly, you can’t spend these ego points on fashionable new outfits for Poirot, however if you act decidedly un-Poirot, such as grilling a suspect too hard, you’ll be hilariously chastised by Hastings, along the lines of, “Why Poirot, I’ve never known you to be so brutal!”  Priceless. 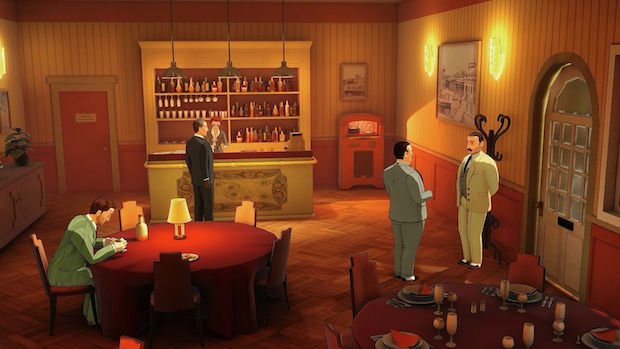 "The voice acting is mostly passable, the one standout being that of Poirot himself.  While not as refined as David Suchet’s well known performance of Poirot on the long running series of the same name, the actor here does a capable job, if slightly over the top."

Visually, everything looks rather nice.  There is a definite artistic style at work here, reminiscent of the “Borderlands” series of games.  This stylized approach is used to good effect here, as it downplays the overall gruesome nature of the actual crimes being committed.  The art style also conveys a timeless quality, which works well for a game based on a novel set in the 1930’s.

Your pursuit of the murderer will take you to a few different locales around London, there are three main crime scenes, with small stops along the way at Poirot’s Whitehaven residence, as well as Scotland Yard.  The colors are bright and everything has a lovely sheen to it; this isn’t the dreary rain soaked London you may have seen in your nightmares, this is a much more inviting one.

The voice acting is mostly passable, the one standout being that of Poirot himself.  While not as refined as David Suchet’s well known performance of Poirot on the long running series of the same name, the actor here does a capable job, if slightly over the top.

Perhaps akin to an unkempt mustache, the game is not without its faults, however.  For the most part, the game does a great job at creating the illusion of freedom, and letting you explore areas to your hearts content, however, for all of its expansive areas, ripe with clickable objects and interactive opportunities, this is still a very linear game, and like most linear adventure games, you must complete A before moving onto B, etc.

Naturally if you’ve read the novel of the same name that the game is based on, you’ll find very little surprises here.  The game seems to follow the narrative, almost to a fault, for better or worse.  This provides a definitive structure, narratively, but doesn’t allow for much in the way of creativity. 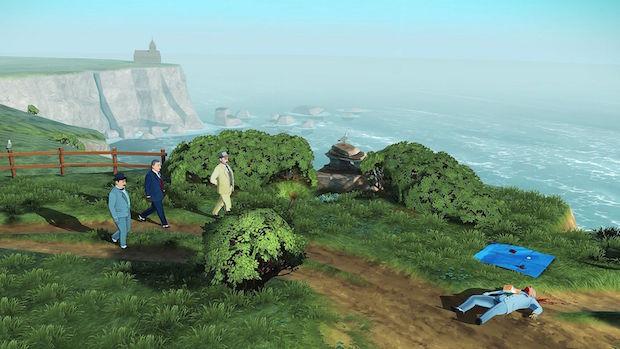 "The game’s biggest problem may not be its linearity or its lack of innovation, but rather its longevity. With only three interconnected cases, it can be completed in under 5 hours. "

The game’s biggest problem may not be its linearity or its lack of innovation, but rather its longevity. With only three interconnected cases, it can be completed in under 5 hours.  There is little replayability to speak of, and no collectibles or other motivating factors to bother with another playthrough.

“It is the brain, the little grey cells on which one must rely,” is often quoted by Poirot.  In Agatha Christie’s The ABC Murders, rigid structure ultimately wins out over originality and freedom.  At its best moments it shines, pulling you effortlessly into the role of Hercule Poirot, set against the visually enticing backdrop of 1930s London.  Sadly, such efforts are, like the game’s relatively short length, ultimately fleeting.

Lovely stylized visuals that serve to enhance the setting and bolster the narrative; who doesn't want to play as Poirot??

Terribly linear; entirely too short; follows the structure of the narrative it's based on to a fault

Final Verdict:
FAIR
Playing as Hercule Poirot is a mostly entertaining romp through 1930s London, minus a few hitches along the way.
A copy of this game was provided by Developer/Publisher/Distributor/PR Agency for review purposes. Click here to know more about our Reviews Policy.

Harmonix will be tasked with developing "musical journeys and gameplay for Fortnite while continuing to suppor...

New types of loot like amulets and rings along with customization options like skin types, tattoos, makeup and...