Age of Empires: Definitive Edition Wiki – Everything You Need To Know About The Game

Everything you need to know about Age of Empires Definitive Edition.

Age of Empires was a classic real time strategy title created by now defunct Ensemble Studios in 1997. Using historical societies and elements, players control their empires, advancing it through four ages, climbing the tech tree and destroying your enemies. Age of Empires: Definitive Edition was released on the Windows Store exclusively on February 20, 2018 and offered redrawn sprites, 4K support, remastered audio and various gameplay improvements to go with just being on an engine more friendly for modern systems.

Age of Empires: Definitive Edition was first revealed in June 2017 at E3 2017, by Microsoft Studios Creative Director, Adam Isgreen. The game was originally planned for October 19, 2017, which was 20 years exactly after the original release. However, the game would receive a delay to February 20, 2018, citing polish time to “treat the Age of Empires franchise with the respect it deserves” according to Microsoft.

The definitive edition would add new quality of life improvements expected from a modern RTS game, that the original version lacked. Each campaign is now fully voiced. There is an all new UI, the ability to set control groups and attack-move, an idle villagers button and improved destruction physics, among other things. The campaign and scenario editor allows would be creators to make their own custom campaigns that can be shared with other players via the Age of Empires website.

Microsoft would cite before release that the game was exclusive to the Windows Store platform because they wanted to route multiplayer for the game through Xbox Live, which was a feature other platforms like Steam would be unable to support at present.

Upon release, Age of Empires: Definitive Edition saw mixed or average reviews from critics, hitting a 70 on Metacritic, with the score as a reflection of what many critics saw as a solid update of a game, praising its visuals and soundtrack, but with a lot of anachronistic issues that have been superannuated by modern titles. 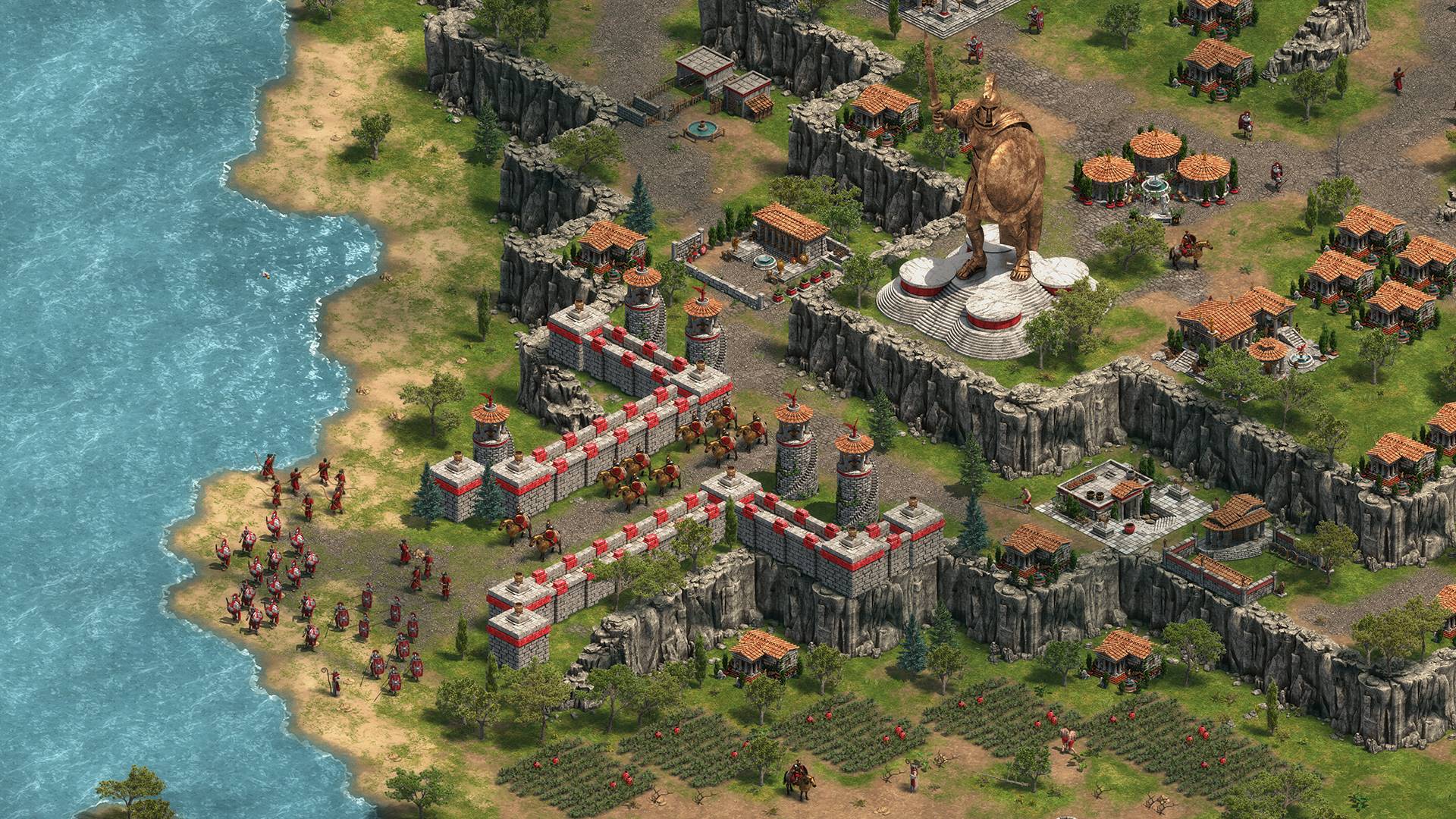 Age of Empires doesn’t have much of a story per say. There is a single player campaign element, which is divided into different segments and often features the rise of a specific empire in history, while asking the player to consider a variety of objectives while they do it.

The first campaign, Ascent of Egypt Learning Campaign functions as a tutorial for how to play the game, showing fundamentals such as resource gathering, army building and rising through the tech tree, as well as more advanced strategies such as trading and wonder-building.

The first real campaign, Voices of Babylon, tells the rise of the Babylonian Empire. Players take the civilization through its rise and fall through eight chapters. Next, players take on the roles of famous Greeks.

Finally, in Yamato of the Rising Sun, players take the Yamato Kingdom from just another of many clans across Japan, to bringing the entire nation into unison under one rule. Again, there are eight unique missions within this campaign. 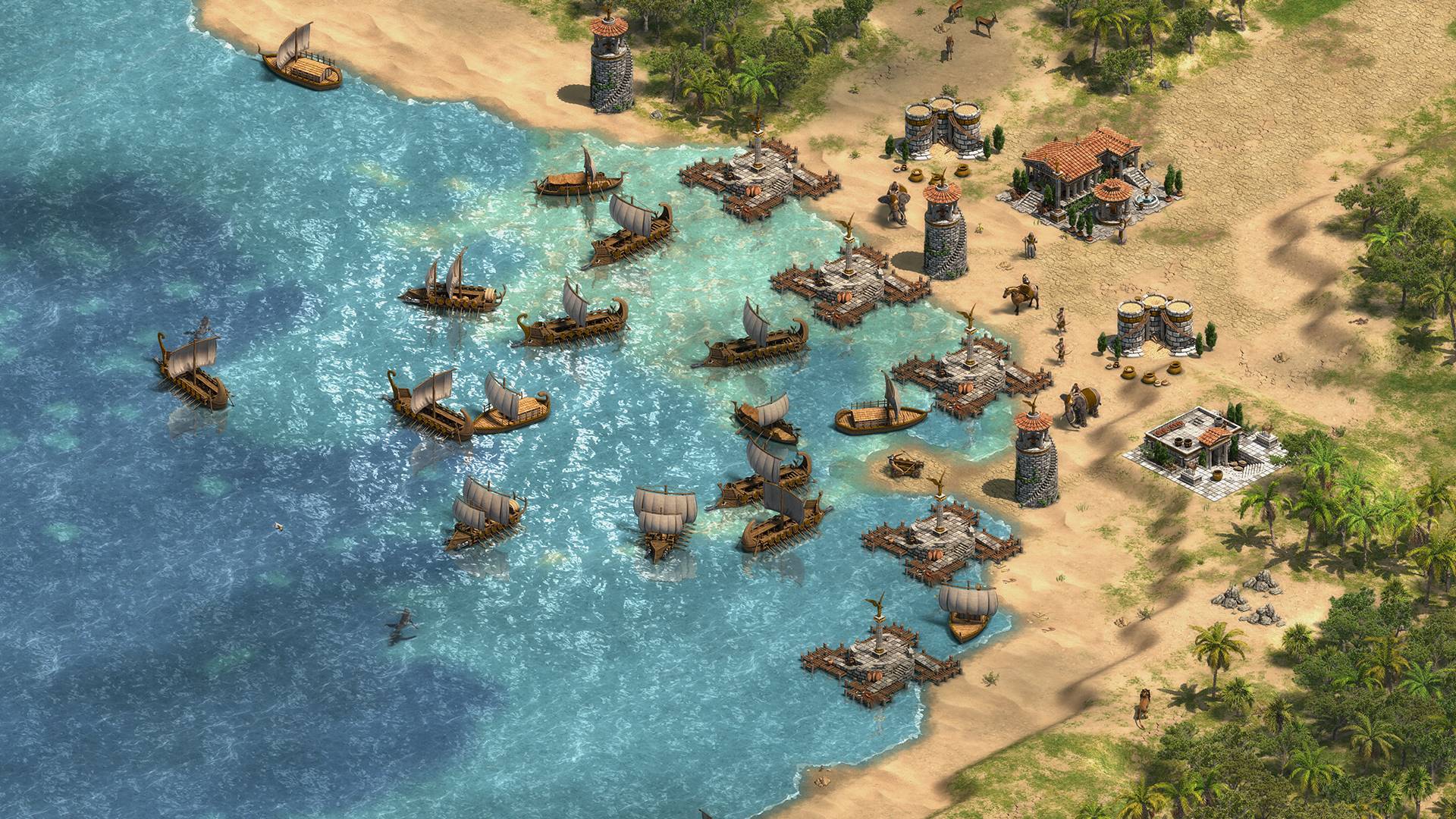 Regardless of specific game mode, such as campaign that would include specific objectives for each map, the player is generally going to be working on a civilization up from hunter gatherers into an empire to be reckoned with. Players use different types of units to handle different tasks, from resource gathering to war waging.

There are 12 civilizations to play in the game, split between four styles of Mesopotamia, Egypt, Greek and East Asian. These correspond with the empires featured within the campaign, though the different subsets within each of the larger groups has different tech trees to climb, which helps to balance the game by ensuring that not one single army can every have all tech.

Using villagers to gather resources during the game is of the utmost importance, as resources do not grow back and allowing your enemies to hoard all the wood or stone will put the player at a significant disadvantage. Villagers and other such civilian units can serve combat roles in a pinch, but it’s to their significant disadvantage. They’re far better suited to resource gathering, repairing buildings or warships from damage or foraging for food.

The player’s resources also determine their ability to create new buildings and they directly tie into the tech tree. Technology is researched in a linear manner, with more becoming available to the player based on previously researched upgrades and the age that your civilization is in, which is itself a feature of the tech tree.

Military units are the central combatants, and while largely land based given the historical basis of the game, there are other classes that can give a player the upper hand. Base infantry type get in close and Archers attack from a distance either mounted or on foot. Other kinds of mounted units such as war elephants and cavalry can inflict more damage than basic infantry. The player can also build siege machines such as Ballista and Catapults, which each having their own benefits such as the catapult doing bonus damage on buildings, and splash damage to nearby units.

Sea based units can be created, including villager-like Fishing boats, transport ships which can move the other units over the water and can be useful for flanking, and Warships which can attack other sea based units, enemy units and buildings close to the shoreline. The tech tree and the potential inability to train a unit or two is the only real differences between civilizations, meaning that a Yamato Swordsman is the same as a Korean Swordsman. It’s the tech tree that provides potential upgrades to these unit types that other civilizations would lack, and differentiates the 12 civilizations.

The player is also responsible for maintaining a base, which is where villagers work from, armies are trained from and games are won. If the player’s buildings all fall, they will not survive the game. Players begin with a town centre and four villagers, and must quickly begin to gather the resources needed to build housing to grow their population cap. From there, other buildings can be developed that facilitate training of military units, researching the tech tree, defensive fortifications for when your armies are away, and expanding storage capacity for resources.

Finally, Wonders are huge, architectural achievements that represent your pinnacle of society and accomplishment. They provide no direct gameplay benefit in the way most other buildings do, and take a large amount of resources and time to construct. They do however, act as a win condition for many game types. In a score based game, just building the wonder is worth a lot of points and can usually decide the game. Because of its importance to win conditions, players need to keep their wonders well protected from their enemies.