There is a concept in economics called the opportunity cost. It’s a very basic concept, really- because time and resources are limited, if you want to do one thing, you must forego doing another thing. Opportunity cost is the basis for the predicament of choice, that so many games so effectively utilize- if you pick that one dialog option, or that one dungeon, or that building to prioritize, you forego all the alternatives. What happens if you pick the alternatives? Impossible to tell unless you play again.

In the case of strategy games, and especially turn based 4X strategy games such as Age of Wonders, opportunity cost has long been the basis of gameplay- if, for example, you want your empire to specialize in military strength, you will have to forego developing an effective and powerful culture, because time and resources are limited, and you’re locked in a race with others, and you need to get ahead in whatever it is that you can get ahead in.

Therefore, when a strategy game effectively nullifies the opportunity cost, victories begin to feel slightly empty and hollow. Sure, you have a sprawling empire with thriving cities with all kinds of amenities possible… but why take any pride in any of it, when achieving it was literally as simple as clicking on the construction command? 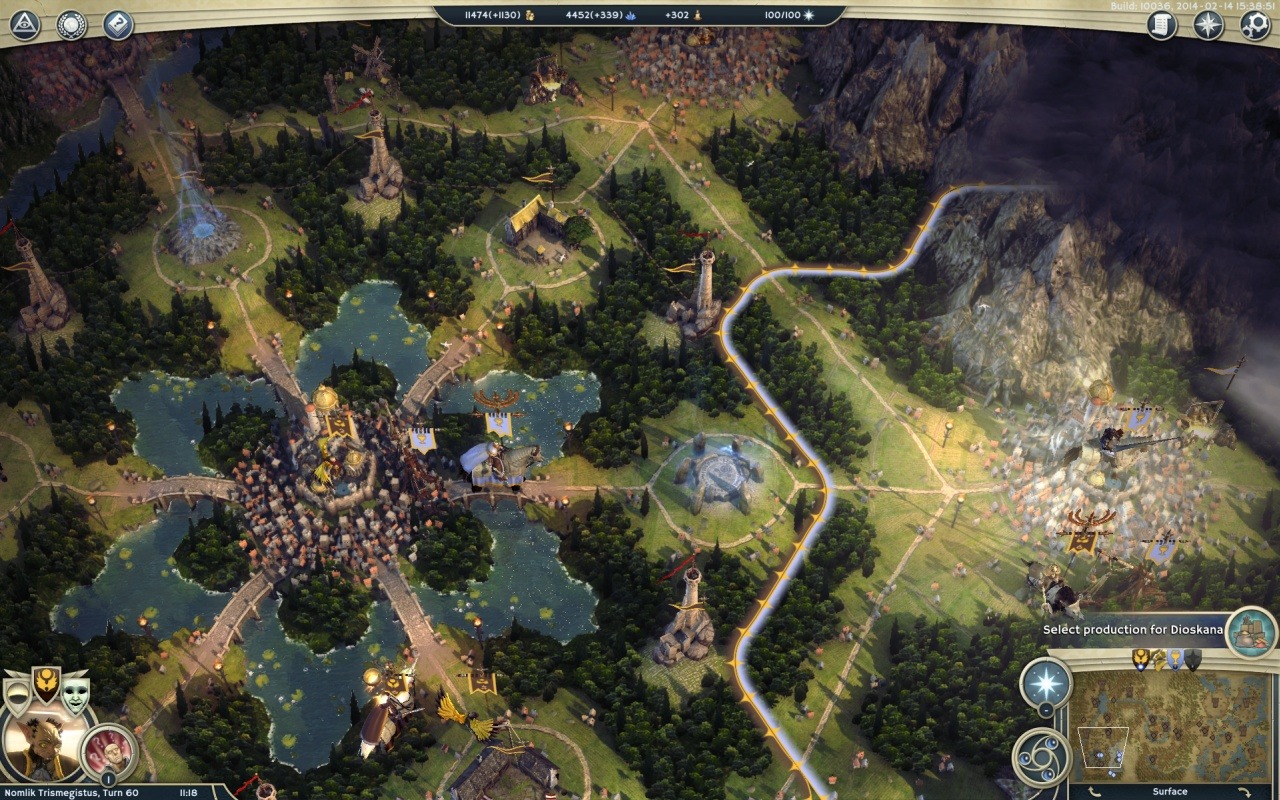 " Age of Wonders 3 today stands as a rather flawed strategy game, with a lot of scope for evolution and development. But it also stands as the best that the series has ever been, at least mechanically speaking."

That is a problem that plagues Age of Wonders 3, the third installment in the long running, classic strategy game franchise which returns after a decade long hiatus. Back in its heyday, this franchise used to be at the top of its genre, at the forefront of its progress. Today, ten years later, it scrambles to catch up with all the advancements in the genre that have taken place since. And while it misses a lot in the process- such as the aforementioned opportunity cost- it also gets a lot right. Age of Wonders 3 today stands as a rather flawed strategy game, with a lot of scope for evolution and development. But it also stands as the best that the series has ever been, at least mechanically speaking.

A large part of that mechanical adeptness comes from Age of Wonder’s other side- you see, where it seems to falter a little in the empire building and management aspects, it does extraordinarily well with battles and exploration. Where the predicament of choice is wholly undermined on the macro scale, Age of Wonders 3 does an extraordinary job of reinforcing it on the micro scale. Everything that you do in battle has a price, and there are some very difficult choices that you need to make- most of these are trademarks of the genre, involving unit placement, accuracy versus damage, movement penalties, and so on and so forth, but Age of Wonders 3 does it all a bit better thanks to how your units get uniquely developed and powered up with time.

Basic units will get standard bonuses upon leveling up that will depend on what kind of unit they are, but for heroes, you choose how to spend their skill points, choosing either from a plethora of skills, or enhancing their stats. This causes each unit to be uniquely tailored to your playstyle, even the basic ones, and it leads to each unit having a history with you- meaning you’re likely to make some irrational decisions on the battlefield to protect a unit and to get it out of the line of fire simply because you’ve grown attached to it.

It’s actually a lot like Fire Emblem in that regard- it’s unforgiving and mechanically accomplished in its strategy, but at the same time, it knows you won’t be, that you’ll let irrationality cloud your judgement, and it exploits that fact to make life difficult for you. 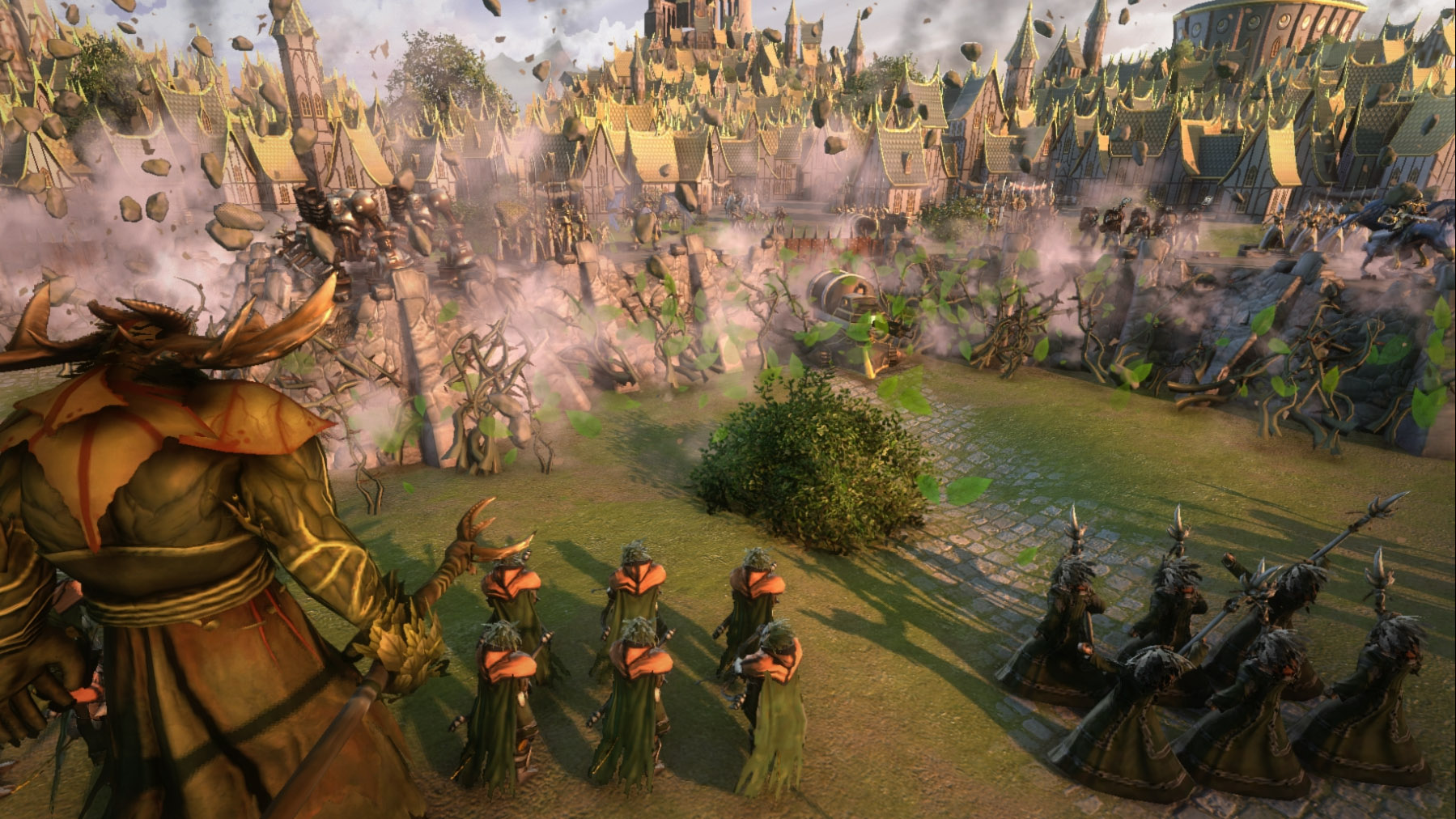 "It's actually a lot like XCOM and Fire Emblem in that regard- it's unforgiving and mechanically accomplished in its strategy, but at the same time, it knows you won't be, that you'll let irrationality cloud your judgement, and it exploits that fact to make life difficult for you."

In spite of the fact that Age of Wonders 3 relies so much on battles, it keeps things interesting and varied- you aren’t always lining units up for some siege or battle of conquest, you’re also exploring the map (a necessity, if you are to expand), finding ancient, abandoned dungeons, and clearing them out, completing quests, and more. In that regard, Age of Wonders 3 often feels like a very well done, novel role playing game that ties heavily into empire building and management- and viewed solely from that perspective, it doesn’t feel as lacking. Viewed from that perspective, the strategy elements seem mighty impressive.

Unfortunately, no one goes into it with that perspective, and especially not when the game itself sells itself as a strategy game just based on appearance- one look at its hexes, and its minimal, clean UI, and your initial impulse might be to think you’re watching a Civilization game. And when that is the kind of heritage that Age of Wonders 3 pits itself against, at least in the macro scale, it comes away sorely lacking. This problem, this lack of choice on the macro scale, is exacerbated by the simple fact that the technology trees for all the races seem to be a little bit too similar- again, there isn’t enough differentiation or meaningful choice provided to the player here.

Thankfully, that one complaint that I keep coming back to really is only one of two complaints I can level against the game at all. On all other counts, it excels. Consider, for example, the graphics, which are beautiful, and present the player with a lush, gorgeous, fully realized fantasy world; consider the ambient music, that lulls you into the world, or the voice acting that at worst is inoffensive, and at its best enhances immersion. Consider the clean and simple UI, which makes handling such an enormous game with so much going on so easy. Consider the controls, or the hex-based gameplay, which take so many cues from Civilization (and other recent 4X games), changing Age of Wonders for the better.

" But all these kinks aside- and there are a fair few, and they do hold the game back from being all that it could have been- Age of Wonders 3 is still the best the series has ever been."

But for all of this, there is (yet again) a counterpoint that nullifies a large part of what Age of Wonders 3 accomplishes- in this case, the game’s multiplayer mode, which seems to suffer a lot of connection troubles during online play (although we have been promised a fix to that). The number of drop outs and the amount of lag is high enough to adversely affect the quality of online play. Personally, I don’t play Age of Wonders online enough for it to bring down the overall experience for me enough, but for those that do, this has to be a downer right now.

But all these kinks aside- and there are a fair few, and they do hold the game back from being all that it could have been- Age of Wonders 3 is still the best the series has ever been. Unfortunately, the series is held to early 2000s standards, and the genre has moved on substantially since then, which, in a lot of cases, means Age of Wonders 3 compares unfavorably to other games on the market.

The lack of real choice, and as a result, strategy, offered on the macro strategic scale is a sore point, particularly when juxtaposed with the beautifully realized tactical depth of the micro scale battles and skirmishes. But for all of its troubles, 4X strategy game players will probably be well served with Age of Wonders 3, a welcome return for one of the hallmarks of the genre.

Lack of meaningful choice or depth on the macro-strategy scale; multiplayer mode suffers from connectivity issues

Final Verdict:
SUPERB
4X strategy game players will be well served with Age of Wonders 3, a welcome return for one of the hallmarks of the genre.
A copy of this game was provided by Developer/Publisher/Distributor/PR Agency for review purposes. Click here to know more about our Reviews Policy.