Even if side scrolling shooters are not considered to be triple A title worthy games anymore, it’s still great to see companies invest in this classic style. Out of this style has spawned the bullet hell version where you’re lucky you can even see anything on the screen once everyone starts shooting. No game better captures this than Rising Star Games and Cave’s Akai Katana, available now on Xbox Live.

Akai Katana was released in 2010 to the arcades. Sadly, arcades have been in the decline for years and most likely, you may have missed it. Luck for all of us, the game was recently ported to the consoles. Clocking in at about 1.16 gigs, Akai Katana is such a direct port that for the most part, there is very little English. Although the menus are in English, none of the voice dialogue are spoken in English, so when the bosses say something, they might as well be talking to themselves. Since it’s fairly obvious when the boss fights are, you don’t need to worry about boss confusion, just aim and shoot away. Oddly, the Epilogue was in English, and there’s nothing better than beating a game and then getting the story. 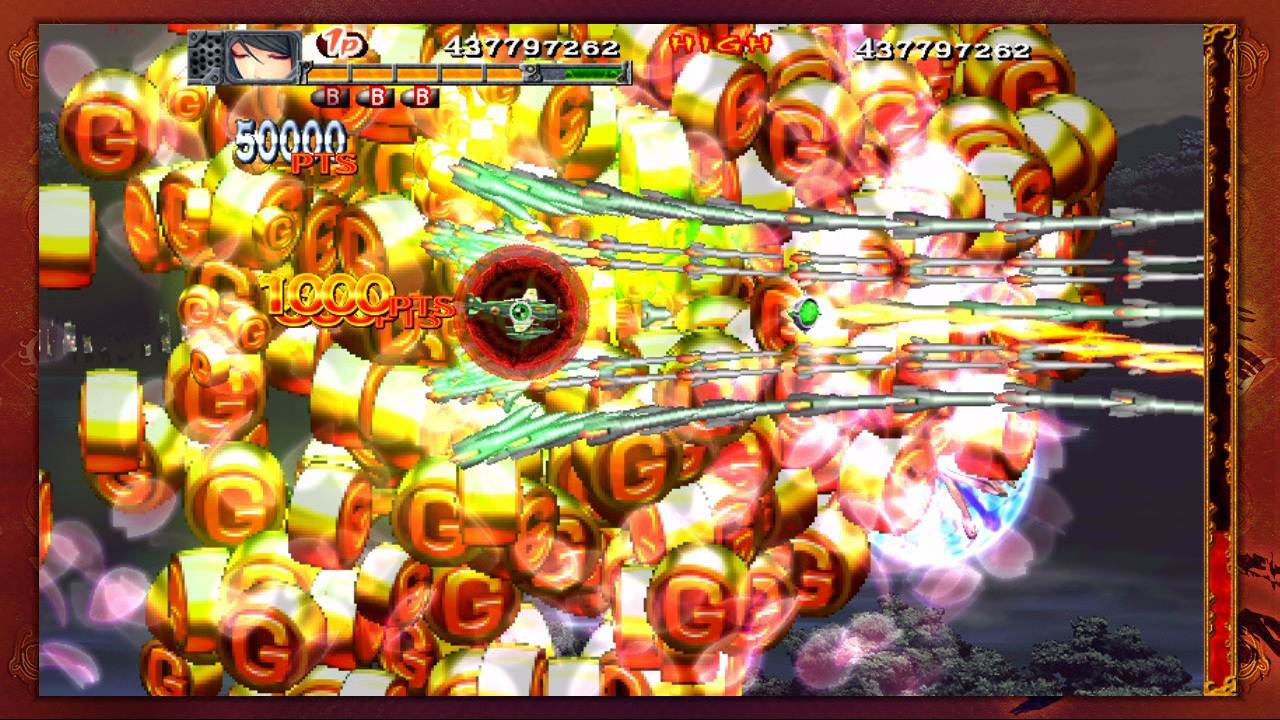 Akai Katana comes with 3 playing modes, Origin, Climax and Slash. Under these three modes, you can play 2 of them as a Novice, although I didn’t notice a difference. You can also play the 3 modes under Deploy, or Scoring. Scoring allows for players to compare their scores against other Live members or friends. Under Training, you can select any level and any type of vehicle and summon to practice under. I expected the training levels to actually explain things like; why am I shooting? Why are they shooting at me? What is the difference between blue, green and pink bullets? Why do I have a summon? What does my summon do? What does my charge do? Why are the bosses freakishly huge in comparison to my teeny tiny ship? Why does nothing here make sense?

The last question is a doozy, and even after beating the game in under 45 minutes, I still can’t tell you what happened. All I know was I held down the trigger and kept shooting until I died. When I died enough times, I hit the continue button and just kept going until I died again. And that is exactly how gameplay was for the entire 45 minutes. There was no upgrades, no weapon switch, no power ups, no summon boost, no up front story. I was surprised there actually was an Epilogue at all, since there wasn’t a hint of a story beforehand. This was a straight out shooter that clearly was designed for you to pump quarters in. 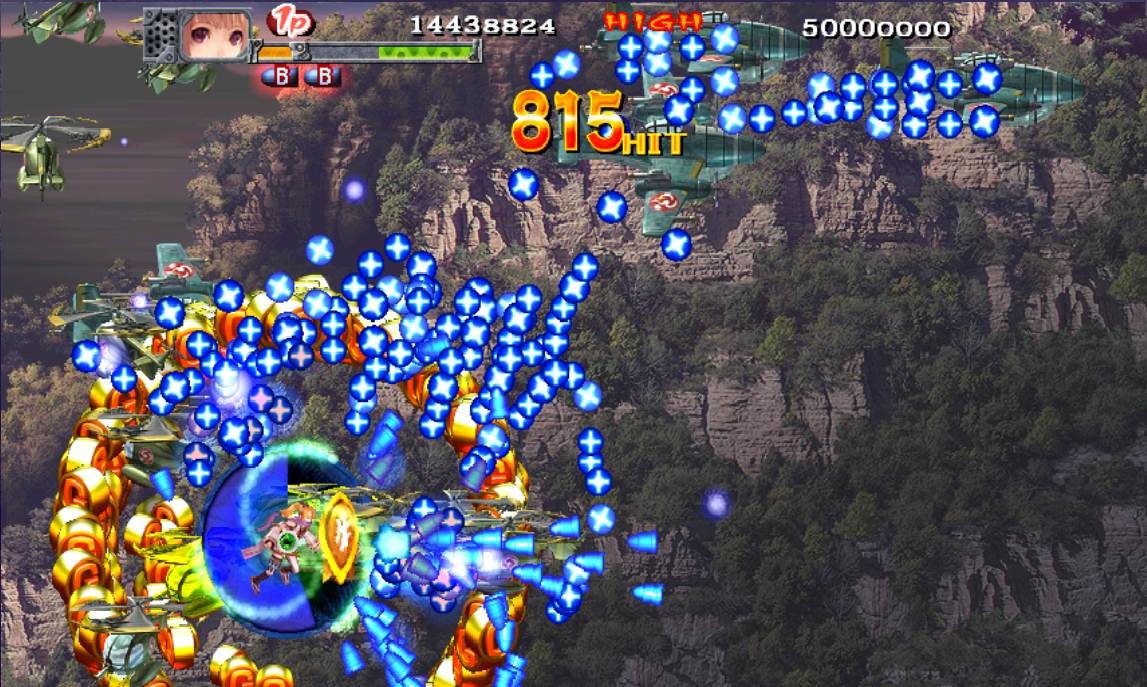 The game sadly doesn’t offer a multiplayer online play. It does however offer a 2 player option to local players. However, I found this option to only be available to Origins. Neither Climax nor Slash allowed for 2 players, although a single person could play as either 1P or 2P, but there was no reason for this option. This may have been the most disappointing aspect of this game. Origin turns out to be a 4:3 scale lower resolution version of the game. Climax and Slash are widescreen, HD versions. With so much going on in the game, why wouldn’t I want 2 players in a bigger screen? Instead, if you want to share this game with someone else, you need to do it on the lowest resolution, on the smaller scaled screen. If I had a friend come over and wanted to get them interested in this game, this would be a hard sell. What makes it even worse is that there’s no hint to Origin being the only 2 player version. If you enter Climax or Slash, the menu option for selecting vehicle and summon still shows both sides for 2 players, and so I spent more time figuring out which mode allowed for 2 players, than it did for me to beat the game. 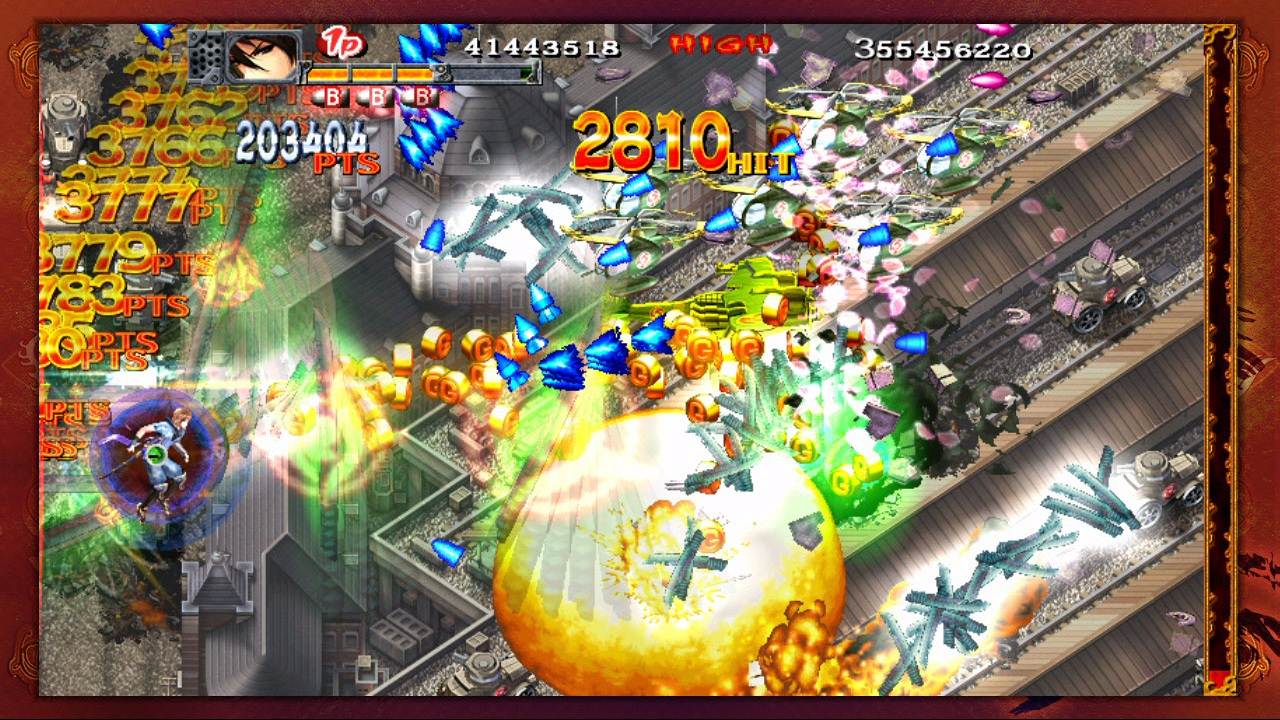 The only saving grace to this game is the graphics. They are top notch and when the storm of bullets stop every once in a while, you can see some great details in the landscapes, tanks, planes, battleships and bosses. The art is so good that most people might not even notice the low resolution verse the HD if it were not for the 4:3 scale verse widescreen. The art work is also well done. Unfortunately the only time you see the drawings are in the selection menus and the Epilogue. And truthfully, with so much noise from the bullets, you most likely won’t see much of the art either. I’m not saying this game would be better if all enemy tanks were allowed to only shoot once and then sit back and wait to be killed, but this version of bullet hell is just way too over the top. Having landscapes and background art seems almost pointless when you can’t see it.

If you’re looking to blow off an hour and aren’t looking for a game with substance, Akai Katana might be the game you’re looking for. It offers nothing but mindless shooting in such a barrage of bullets. If you want to share this game with a friend, you may want to at least let them play Climax or Slash by them self so they know they aren’t being completely cheated when it comes time to play simultaneously. Although it’s nice to know this game originated in the arcades, it’s also a reminder of why we haven’t been back to the arcades in a while.

Too Much Bullet Hell and not enough substance

Final Verdict:
FAIR
Akai Katana blasts it's way onto the Xbox Marketplace, and then keeps blasting it's way past any story or content.
A copy of this game was provided by Developer/Publisher/Distributor/PR Agency for review purposes. Click here to know more about our Reviews Policy.