Posted By Rashid Sayed | On 22nd, May. 2010 Under News | Follow This Author @GamingBoltTweet

It looks like Remedy are giving it their all in supporting Alan Wake with more downloadable content. HellDescent were able to find some information on the next DLC for Alan Wake. Upon looking at the downloadable content menu, one can clearly see that the next release is scheduled in 67 days and the DLC will be named as ‘The Writer’. The pack will cost you 800 Microsoft points. The first DLC: ‘The Signal’ is due to release in July. 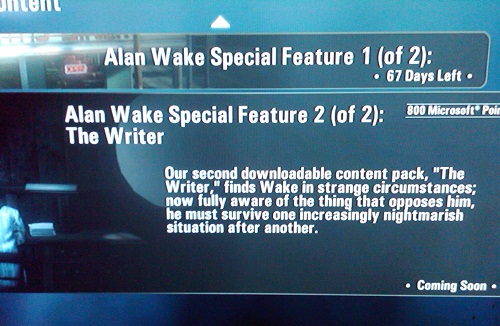