So a few days ago we got our hands on a near final version of Alpha Protocol from SEGA via E-express Interactive, and we are very pleased to announce that it is shaping up to be a pretty solid action role playing game. I will try and keep the story elements hidden as much as I can since I don’t want to spoil it for you guys. So the game starts off with you taking the role of Michael Thorton, a rookie CIA agent. So after a failed mission Michael has been cut off from all his contacts and has been betrayed by his seniors.  Now that the US government is on the hunt for him, Thorton has no option but to join Alpha Protocol a unit that specializes in recruiting senior agents. Alpha Protocol is the name of a secret organization that doesn’t fall under the jurisdiction of the United States government.  This allows them to do military operations and covert actions throughout the world, all the while giving the U.S. plausible deniability. 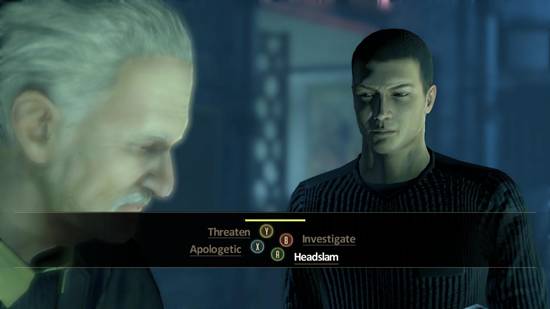 As I had promised earlier I won’t be going too deep in the plot so I will now concentrate in to explaining you guys what actually makes the game tick. As you must have already observed through the trailers, the central element of the game play is shooting. But before that the developers have added the tried and tested elements of RPG’s. When you start the game you will be able to customize Thorton’s appearance. From his mustache to his hair, everything about the character can be customized. After you are done with customizing your character, you will be able to choose the type of traits that the protagonist will have. You can select any one of the following:

So depending on what fits you the best, you select the option and move ahead. We selected Covert ops since it had the best combination of stealth and combat. 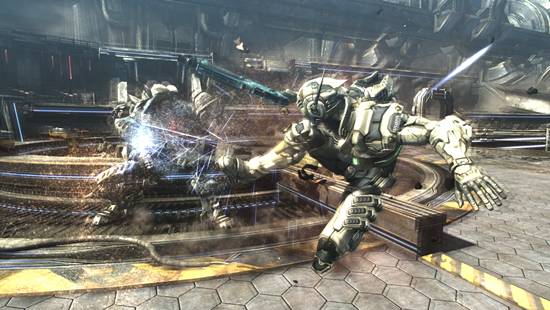 The game also has advancement points that you can earn through discussions with NPC’s and by completing missions. These AP points can then be utilized to buy a variety of things which I am going to discuss a bit later.

Now let’s start with how a mission unfolds in Alpha Protocol. You basically start off your mission in to various safe houses that you will find at different maps within a game. Every mission will have its set of very long and detailed briefings. This is where you will be introduced to the dialogue and the reputation system. Just like in the case of Mass Effect, your actions will decide the fate of your character. Whatever option you will select will impact on the amount of experience points you have earned. Select an appropriate option and your AP and reputation will increase and if you screw it up your AP will go down. Unlike any other RPG, Alpha Protocol will only allow the player to have a conversation once.  After you are done with the briefing you either have the option of attempting the mission directly or go to your lab and customize your gadgets and inventory. Now this is what I really liked about the game. The presentation of the inventory box is the most impressive part of the game. Guns, grenades and gadgets have been wonderfully represented and it feels like you are indeed a part of some tactical organization. The inventory box will be available to you within the safe house or you can directly access it by pressing the pause button. The money that you earn can be used to buy new weapons like shot guns, rifles and snipers. Also a whole arsenal of gadgets is made available. 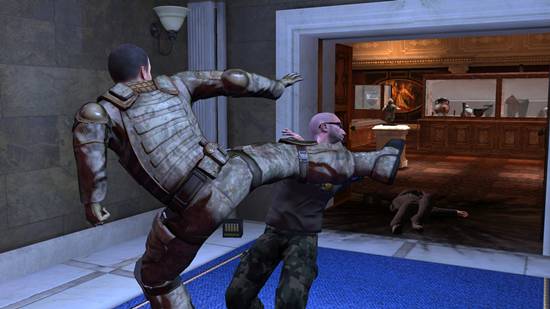 AP will unlock new abilities and make your life easier

Your arsenal includes four kinds of weapons: pistols, submachine guns, shotguns, assault rifles, as well as a host of gadgets and armour. You may bring two weapons into a mission, as well as the armour or clothing worn in the field. Each weapon has 4 upgradable slots: barrels, sights, magazines and accessories. Upgrades can be purchased in the clearinghouse or found during missions.

The pistol is the weapon you use in close to midrange encounters. When used at close range, a pistol can be trained on a target until crosshairs appear in the Target Reticule. When these crosshairs close in on the centre of the Target Reticule, the next shot will be a Critical Hit – inflicting additional damage.

The submachine gun lays down a torrent of suppressive fire. Multiple hits with the SMG activate a Critical Hit Streak – increasing future hits until the shooting spree ends or you reload.

The assault rifle is the gun for the tactician. A weapon fine-tuned with surgical precision, used for targets that have taken cover or are at a great distance. Its raw damage output makes it the weapon best suited to cracking heavily armoured targets. The assault rifle fires 3-round bursts with impressive stopping power. By steadying your aim over any point in space, you can line up a Critical Hit that will fire all three shots of the next burst in the exact same spot. You can see how close you are to lining up a Critical Hit by watching the crosshairs in the Target Reticule – when the crosshairs close into the dead centre of the Target Reticule, your next shot will be a perfectly grouped Critical Hit.

Suitable for short range encounters, the shotgun launches a cloud of small projectiles in one staggering blast. By holding down the Left trigger, you can steady the shotgun for Critical Hit that knocks down anything in its path. When the Left trigger is held, the Target Reticule will fill up with a circular indicator – when that indicator is a complete circle, the next shot will be a Critical Hit.

You will always have one suit of armour or clothing on any mission. Armour provides Endurance, as well as room for special upgrades, though it is often at the expense of making you more visible and less quiet. Especially daring agents can forgo sensible armour to wear simple clothing, and sacrifice protection for inconspicuous clothing that won’t hinder stealth.

In addition to your primary arsenal, you have a collection of gadgets to help achieve your mission objectives. It’s a good idea to be sparing in use of these tools, as you can only carry a limited amount. The number of gadgets based on your Technical Aptitude skill the kind of armour you choose for the mission

Delivering a powerful concussive blast, this hand grenade is modified from the standard infantryman’s grenade with an adhesive surface and a simple proximity sensor – making it useful as both a thrown weapon and a placed trap.

Designed for non-lethal (albeit tortuously painful) takedown, this modified grenade features a series of charged capacitors in the place of explosive material. Delivering a powerful arc of armor penetrating current to several targets, this device’s short radius makes it most useful as a placed trap, but can be exceedingly dangerous when thrown accurately.

Alongside bandages and rolls of gauze, this compact kit contains an auto-injector of synthetic platelets and pain killers. Invaluable when medical attention is needed and there’s no time for thorough care, this medical marvel can keep an agent alive and kicking despite serious injury. Multiple doses in a short span of time are potentially fatal, so an agent is strongly advised to allow the body time to metabolize the blood clotting agents before injecting subsequent doses.

The Flashbang uses densely packed flares and ear-splitting concussive sound to blind and deafen opponents in a room. Housed in a special grenade canister with a basic proximity fuse, the Flashbang can be thrown in a firefight or placed on a nearby surface to cover a retreat.

This modified grenade uses a small explosive charge to ignite a pressurized body of flammable liquid – dousing an area (and any targets within) in intense flames and thick smoke that will block sight. Featuring an adhesive surface and basic proximity sensor, the Incendiary Bomb can be used as a thrown weapon or a placed trap.

Delivering a powerful spike of multi-spectrum interference, the EMP (Electromagnetic Pulse) Charge will temporarily disable cameras, automated turrets, alarm systems, and other technological systems. When used with the Interference skill (in the “Technical Aptitude” branch), an EMP Charge can be tuned to selectively disable electronic components. This allows a trained agent to use an EMP to short circuit the alarm leads on a tumbler lock and then kick the door open, or wipe the security programs off a computer while leaving storage drives intact for the taking.

A tool for deception and harassment, the Sound Generator is a directed sonic projector capable of bouncing a coherent sound off any surface at short or medium range. Programmed to broadcast innocuous sounds, the Sound Generator’s compact size and design allow ‘point and shoot’ operation with an effectively limitless battery life.

Epinephrine is a natural neurotransmitter that prioritizes brain and muscle activity while suppressing non-emergency functions such as digestion. This syringe of synthetic Epinephrine will give an agent a rush of strength and precision – resulting in improved recoil control and powerful bursts of hand-to-hand strength.

A combination radio transmitter and voice distortion device used to send false signals. The Radio Mimic allows the user to call off an active alarm by sending a deceptive “All clear!” message. Limited battery power and the potential to be traced allow a mimic device to be used only once.

This compact, aerodynamic disc of plastic explosives features a short-range radio for detonation. Adhesive on two sides, this mine can be thrown and attached to virtually any surface and then detonated at the agent’s discretion.

For a more detailed look at the gizmos, check this video below:

The shooting sections are a bit of hit and miss for me. It seems like the developers have tried to implement a Gears of War like shooting mechanics. But for some reason it did not worked out fine. Many times I found myself stuck at corners or was uncomfortable to aim while I was in cover. The advancement points (AP) which I had talked about earlier can be used to improve the protagonist’s traits. A number of traits can be improved on which will give the player special abilities like Thorton will be able to shoot multiple enemies at once  and so on. Overall the combat element is pretty strong and as expected is the heart of Alpha Protocol’s game play. 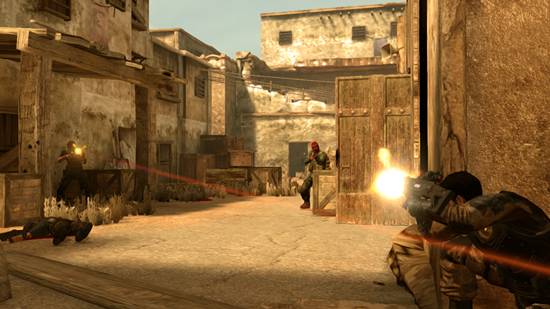 The environments are bland

Alpha Protocol is a pretty good looking game. Thorton has been modelled with focus on every minor detail. The characters when they speak look and sound realistic but some of the environments were very bland. This is something which I hope gets fixed in the retail copy. Sound on the other hand is good. Alpha Protocol easily has the best voice acting for this year. Background scores are a bit of a mix bag.

Overall we at GamingBolt are very satisfied how the game is shaping up. Minor issues like the bland environments and the ones that I faced during shooting should be sorted out in the retail copies. Stay tuned with GamingBolt for the full review of this game at the end of the month.