Some games hold a certain place in our hearts for their undeniable quality. Others stay in our brains for their severe strangeness, in a “so bad it’s good” sort of way. Amazing Adventures: The Caribbean Secret just sits in an odd paralysis between these two extremes. Neither poorly crafted nor crazy and interesting, The Caribbean Secret sits in limbo as a game I can respect but have no desire to play.

The Caribbean secret is a hidden object game that tasks you with finding a list of objects within a static scene. Like most games that subscribe to the genre, the plot is fairly translucent. You take on the role of an unnamed adventurer as he quests to track down “the Caribbean secret.” Thus you set out to various Caribbean locations, tracking down items that have very little to do with any kind of mythical treasure. 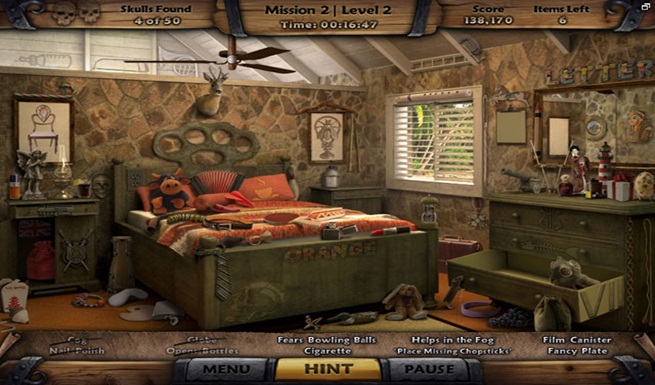 The Caribbean Secret sets the benchmark for other hidden object games

Helping you to click through the static screens that comprise each level is a list of all the items you need to collect. Rather than just feed you the list though, The Caribbean secret keeps you on your toes by giving you clues as to what objects need to be found. One of the big criticisms I have with the hidden object game is how it doesn’t require any real thought but, in The Caribbean Secret, you do actually need to engage the old grey matter from time to time. There are also several clues that involve you moving certain items to other positions on the screen. It doesn’t sound like much, but it helps prevent the game from becoming a mad click-fest, though it must be noted that some of the clues are quite obscure and hinder your object finding adventures. Further helping to keep the game fair is a relatively comprehensive scoring system that rewards fast and precise object collection, but justly penalises you for clicking randomly all over the screen. As nice a gesture as the scoring system is though, it is possibly a little too lenient for its own good.

Whilst the core gameplay of The Caribbean secret is solid and well executed, it begins to become very repetitive after any amount of time at all. The game does a good effort of trying to alleviate this monotony, with hidden skulls in each stage to keep you guessing and alternate puzzles at the end of each level that break up the usual searching mechanic. That said, these games are never particularly complex or exciting, usually encompassing a basic spot the difference or other such visual game. It’s a nice idea, but it does little to prevent the fact that The Caribbean Secret becomes very boring very quickly. 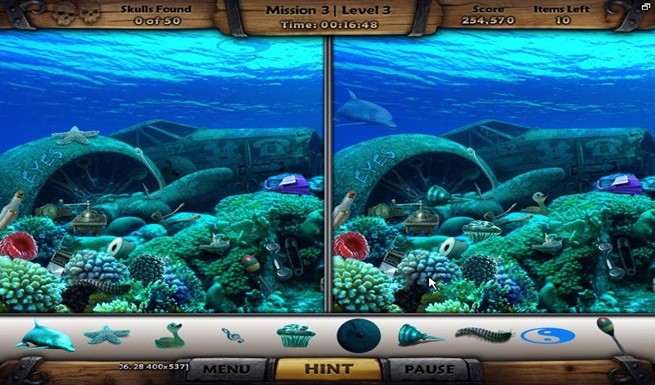 The mini-games are a nice idea, but don’t add much variety to the proceedings

One of the aspects of The Caribbean Secret that elevates it beyond other titles in the genre, is its enjoyable presentation. The graphics are crisp and well realised, considering the game is well rooted in the budget price range. The soundtrack too does a good job of not becoming mind numbingly frustrating but, in its sparsity it isn’t hugely memorable.

The main adventure mode of The Caribbean Secret consists of 25 stages which, provided you don’t get too stumped on any objects, shouldn’t take you more than five hours. Provided you locate all the hidden skulls within the game, (fifty in all) you also unlock two new modes that further the game’s lifespan. The unlimited adventure mode adds further to the object finding shenanigans, but the match three game is just a poor Bejeweled clone. The lifespan is fairly solid for a budget title despite this, but it’s likely that you will get bored and give up on the game long before it reaches its conclusion. 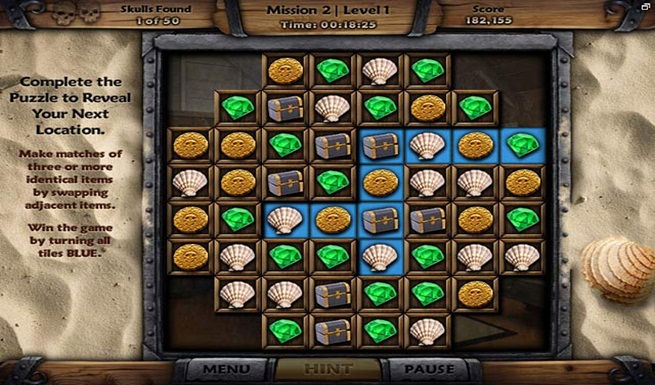 The match three mode is a nice unlock to earn, but it isn’t a patch on Bejeweled or Puzzle Quest

Final Verdict:
FAIR
A refined and well executed, if bland, take on the hidden object game genre. Amazing Adventures: The Caribbean Secret will certainly appeal to fans of the genre, but is unlikely to convert sceptics
A copy of this game was provided by Developer/Publisher/Distributor/PR Agency for review purposes. Click here to know more about our Reviews Policy.