Amplitude returns, but can the fun keep up with the beat?

Through the power of Kickstarter and Harmonix Music Systems, Inc., Amplitude is back and on PlayStation 4. Returning from a long hiatus ranging back to the PlayStation 2 era, this outer space-rhythm and beats game brings back most of  its fun in tact. Originally released on the PS2, the first Amplitude was an amazing Rock Band-style game before that genre was as popular as it is today.

There was no special guitar or peripheral used alongside Amplitude on PS2, it was purely done on the DualShock 2 controller — though, to be fair, this isn’t about an instrument keeping up with the beat but rather a space ship (or something like it) running along a track full of tunes. What was fun in the original Amplitude does make a return for the most part, with fluid controls and precise handling, but a game from long in the past such as this was dying for innovation, and Amplitude for the PS4 just didn’t carry the beat.

The game starts off by giving a simple training course as the ship flies around in a black backdrop with a few different rhythm paths to trek through. Its left, center, and right beats fall into a sequence that must be clicked through constantly changing rhythms and tracks in order to advance the ship further along the track before it runs out of energy. Each successful round of score is rewarded with a slight refill of drained energy to continue pushing the ship forward.

Energy is often depleted by skipping, or missing a beat, not following through to a new track after the completion of the last track or simply hitting the wrong button at the wrong time. After the necessarily short training session, going into campaign from the main menu is almost exactly the same. Luckily the controls, tracking and handling are precise and run smoothly. Choosing between difficulties is really the only difference as the gameplay is a repeat of clicking certain buttons at the right time, over and over again. 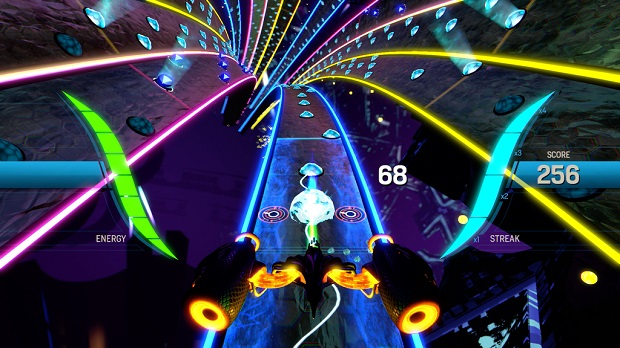 "What was fun in the original Amplitude does make a return for the most part, but a game from long in the past such as this was dying for innovation, and Amplitude for the PS4 just didn’t carry the beat."

The controls are defaulted at L1 (left beat), R1 (middle beat), and R2 (right beat). For me, these controls were a little awkward going from two different triggers on one side of the controller. Luckily, Amplitude had this covered from the start. There are several, and I mean several variations and options to change the controls around for what most players would prefer. Though, it’s a bit odd that a “custom” option to program the buttons in any style was not available. Either way, there are so many controller options there is little to complain about there. After changing out the controller options I found myself laying down the beats like a pro (On intermediate difficulty, don’t judge!) in no time.

A spaceship in outer space seems fit to travel through an infinitely black backdrop. However, Amplitude just uses the luxury a spaceship for no real apparent reason. Sure, it was cool looking back in the PS2 days when we were still new to experiencing “realistic” 3D graphics at the time. Whatever the case may be, a spaceship is acceptable for this lower budget game (less than a million dollars to develop in fact). What was left out from the original are the crazy and often thrown-out-there backgrounds that showed waves of colors, images, videos and so on. With the PS4 version it’s mostly black with a few rich colors thrown in here and there and sometimes, much further along some shapes. Nothing exciting, but when immersed in the continually amplifying difficulty, especially on Hard or above, the backgrounds become of little mind when all eyes are concentrated on the current beat and the next one thereafter.

Who can make a good rhythm and beats game without an amazing soundtrack to keep it interesting and overall exciting? Boasting over 30 tracks, Amplitude stretches out to showcase an appreciation for custom mixed tracks that really bring energy to the whole experience. Many of these tracks are custom created by Harmonix themselves as well as other video game composers. Traveling with the spaceship along the Vocals track and experiencing what the artist is singing, or drums track, bass track, etc. expands those instruments in new and interesting ways. The opening soundtrack “Perfect Brain” created by Harmonix themselves, is a fitting intro song to the entire experience. Many other artists join in on these custom tracks, but no majorly known big hitting artists like there were in the original Amplitude. This is indeed a shortcoming probably associated by budget constraints. 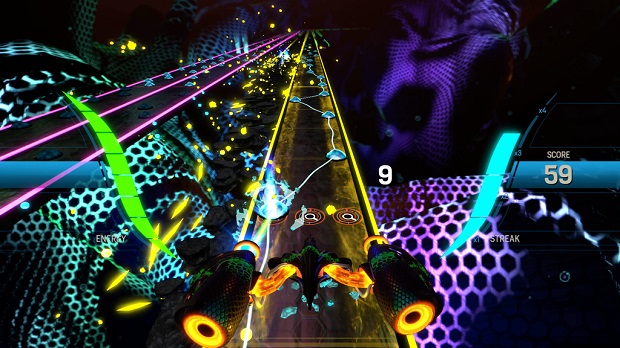 "What was left out from the original are the crazy and often thrown-out-there backgrounds that showed waves of colors, images, videos and so on. With the PS4 version it’s mostly black with a few rich colors thrown in here and there."

Surprisingly enough, Amplitude has a 4-player couch co-op feature attached from the start. Friends are welcomed to join in and help keep the rhythm and beats flowing smoothly by following along on the beat tracks. Much like most other games of this genre, there is a versus co-op mode as well. Challenging friends to find out who has the quickest hands and can lay down the jam is more fun and amps up the experience that much more. Playing with or against a helping hand(s) takes what little this game offers and at least makes it feel as though the developers did try their hardest with what hand was dealt to them. It’s very obvious that Amplitude was indeed a passion project from the start and that should be respected.

Amplitude is little more than an indie-class rhythm and beats game that really tried to cover that fact up with an ample soundtrack, extensive campaign mode, couch co-op and a nice controller selection. But for its asking price (under $20.00), it really didn’t need to be anything more. It’s a very acceptable game for the price and what is offered, though with no online co-op or versus, this game is little more than a house party activity that won’t hold anyone’s attention for very long.

Amazing to see how far a low budget game can go for what it has. Controls are smooth, and soundtrack is ample and refreshing.

No online co-op or versus kind of stings, along with boring, repeated sequences.

Final Verdict:
GOOD
Amplitude is a game trapped in the PS2's past but brought back through the developers' passion. There really isn't any innovation in this version, but it's not expensive so a lot can be overlooked. This game works best at a college dorm party or somewhere with lots of friends. But there's little more to do once everyone has gone home.
A copy of this game was provided by Developer/Publisher/Distributor/PR Agency for review purposes. Click here to know more about our Reviews Policy.