Anno 2205 Review – Careening Towards The Terra

Far from intergalactic conquest, Anno 2205 seems content with rooting itself in Earthly desires.

In an industry full of SimCitys and Civilizations and the odd Cities: Skylines, Anno 2205 is an altogether different beast. What distinguishes it from Civilization: Beyond Earth you ask? Well, unlike that game, you’re not really trying to expand humanity into the stars, foraging a new path built on hope and technology. And unlike SimCity or Cities: Skylines, the point isn’t to build a bustling metropolis that runs at peak efficiency either. That city helps but for the most part, it’s about servicing the people who keep you bankrolled: the investors, the executives, the operators, the men with the money. Anno 2205 is kind of like the financial crisis of 2007-08, except without the crisis part and (most of) the moral horrors that came with it.

There isn’t really much to the game’s “plot”. You’re the leader of a corporation engaged in a technology race with other corporations. Your job is to be more successful and thus…get the most money? There aren’t a whole lot of long-term dividends for why you’re doing exactly what you’re doing in Anno 2205 from a plot standpoint. It all becomes clearer later but for now, you’re not exactly furthering mankind’s triumphs among the stars. Well, not the majority of mankind anyway. 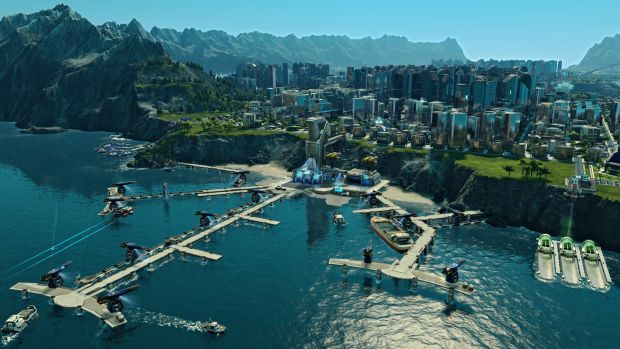 "While most city-builders can function well on maintaining the eco-system that the player creates, a decent end-game in a campaign like Anno 2205 is to be expected…and it sadly doesn’t deliver."

Anno 2205 starts off on Earth as you begin to build houses and plan cities, create power stations and gather minerals and resources, keep your citizens employed and happy and provide ample food and water for their needs. Your citizens begin as low-class wage-earners but can quickly progress up the social ladder to the rank of Operator. This leads to more income for you as you quickly build towards the Arctic. The uniqueness of the area starts to create some diversity in Anno 2205’s challenges – heat is a necessity and you need to keep your citizens close to maximize productivity. Later on, you’ll be taking your city-building exploits to the moon, mining its rare materials to further your research and development back on Earth. Once again, this presents its own challenges. Meteor showers can often disrupt operations on the moon’s surface which means you’ll need to build shields to protect your interests.

As the game wears on, a neat little ecosystem forms between the three habitats you’ve cultivated. Resource from each “city” feeds into the other, making a well-oiled relationship between their machinations important. The problem is that you don’t really feel much of a threat from anyone as you advance further and further into the game. Rival companies will do little more than bribe you for various reasons and by the time you’ve advanced to the lunar stage, they become fairly insignificant to the grand scheme of things. While most city-builders can function well on maintaining the eco-system that the player creates, a decent end-game in a campaign like Anno 2205 is to be expected…and it sadly doesn’t deliver.

It would also help if the end-game were little more than trying to satisfy the big-wig executives you gain throughout. As your Operators progress to Executives and Investors, you’ll receive more income to build and maintain your range of cities. However, you’re essentially stuck trying to cater to their expensive needs with regards to entertainment, gadgets and other luxuries. 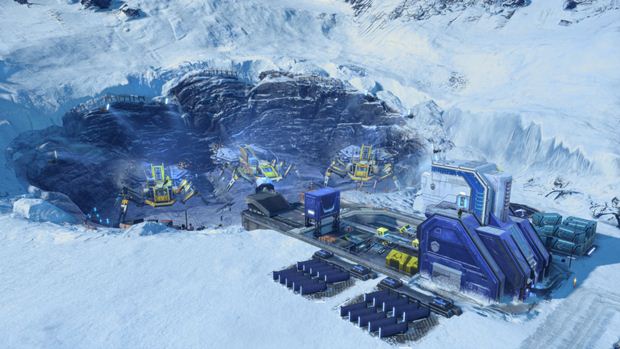 "As a building game, Anno 2205 is an intriguing anomaly in the world of gaming. It’s occupied with exploration and satisfying your citizenry, thus converting them into useful resources, as it is with building and expanding."

On the one hand, it does diverge a bit from the established formula of other city builders. On the other hand, by the end of the game, there isn’t much else to do but to cater to the elite one-percenters and their exuberant demands. If this led to some interesting little hallmarks or achievements that were tangible, it would be one thing. Anno 2205’s Investors are little more than a few extra numbers to your bank balance. It doesn’t exactly scream “magnificence” and “awe” to the builder in me.

That being said, the cities themselves look really good. Earth itself maintains a futuristic, clean-cut but still modern architecture that’s interesting to behold at times. Similarly, the Arctic and Moon locations look distinct by themselves and really help in crafting the illusion of three different cities being managed as opposed to the various branches of a main city. That being said, the various buildings could have used some distinction from each other. It may be tough to tell the differences between factories and housings at times. Also oddly enough, Anno 2205 has some rather sluggish performance on higher settings. Even when dialing things down on my configuration – which is an Intel Core i5 with 8 GB of RAM and an Nvidia GeForce GTX 660 – I still encountered slowdown and some choppy frames every now and again. This didn’t exactly fill my heart with glee, especially considering Ubisoft’s horrible performance with Might and Magic Heroes 7.

As a building game, Anno 2205 is an intriguing anomaly in the world of gaming. It’s occupied with exploration and satisfying your citizenry, thus converting them into useful resources, as it is with building and expanding. However, it doesn’t feel like its reach is extending its grasp when it comes to the scope and scale of the story and end-game (and it doesn’t have the mod support or complexity of Cities: Skylines either, though there will be Season Pass content in the coming months). Couple this with odd performance even on decent hardware and Anno 2205 sticks out as an oddity in many ways. It’s not a terrible release at all – in fact, it may just provide several dozens of hours of entertainment. Just remember that there’s very little to go back to once your dominion over Earth and space has been complete, unless you’re fine with catering to the elite the rest of your existence.

Good looking visuals and aesthetics. Managing three different cities and their resources can be fun and presents a nice change of pace from the city-building norm. Various challenges to experience while establishing different colonies.

Below average hardware optimization leads to shabby performance even on strong hardware. Not much tangible achievement to the end-game. Subpar story and plot. Non-existent threats from rival corporations. Limited scope and replay value after a point.

Final Verdict:
FAIR
Anno 2205 seems like it had promise but was subsequently scaled back on release. It's a decent diversion with some more than decent visuals but you'll crave so much more, especially after Cities: Skylines.
A copy of this game was provided by Developer/Publisher/Distributor/PR Agency for review purposes. Click here to know more about our Reviews Policy.