In the wake of a second quarterly loss 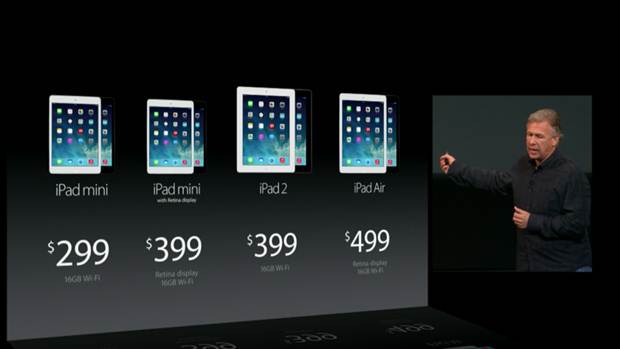 Apple has released the newest details on the updates to their iPad and computer lines. Apple fans across the good have been waiting with baited breath to see what the latest tweaks will be to their favorite Apple toys.

Phil Schiller announced the next entry in the world of tablets. Titled iPad Air, this new tablet weighs around one pound with a 9.7 inch retina display. Under the hood it will be running the new Apple 64-bit A7 chip, will have a much improved camera and it also includes extremely popular fingerprint technology that debuted with the iPhone 5s. This latest gizmo will release on November 1st.

Furthermore, Apple also announced iPad Mini with retina display, featuring a resolution of 2048 x 1536. The new version will have a 64-bit A7 processor and will have four times the performance of its predecessor. The pricing and other details have been depicted in the image above.

iPads aside, Apple also announced that OSX Maverick will have better performance, efficiency and integrated graphics. On the other hand, the next-gen Mac Pro will include a Xeon E5 processor and the fastest ECC memory. The new Mac Pro will cost $2,999 and release date is expected to be in December this year.