Against all odds, this is a fighting game that works.

Let’s talk about AquaPazza (or, more accurately, AquaPazza: AquaPlus Dream Match). It’s a fast paced, frenetic fighting game that is apparently a massive hit in Japanese arcades, featuring an all star roster of some apparently popular anime and visual novel characters. Very little of what I just said about this crossover fighting game probably made sense to any of you- and honestly, I can’t really say that much of it means anything to me either. As a casual player of fighting games at best, and a general disinterest in anime or the Japanese arcade scene, I really had no context or expectations to judge AquaPazza against.

Which, in this case, probably worked out well, as it let me assess the game on its own merits, without the good or bad parts of the fan service that this game is allegedly full to the brims with detracting from the core fighting game experience on offer here. 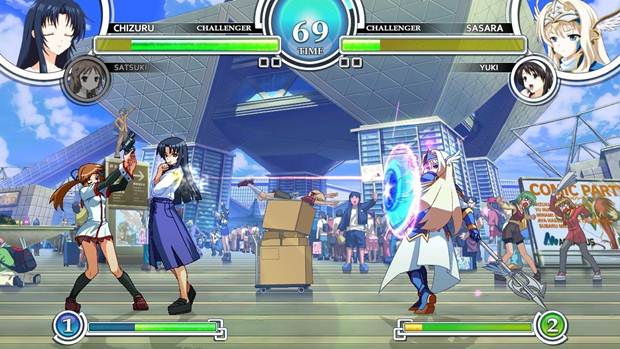 "AquaPazza can be deceptively simple- the mechanics are easy enough to the point where you get the hang of them in a couple of matches, and, almost disappointingly enough at first, it appears that there is little variation in the corresponding attacks (both, damage dealt and damage received) across characters."

AquaPazza is an interesting fighting game- it’s got the usual, core fighting game mechanics that avid fans of the genre would expect (chaining moves, combo attacks, defensive counters, stronger special moves that require time to set up and use up some of your gauge, counterattacks, recovery, and your same variety of melee and ranged attacks that are a staple of the genre), and they are executed and streamlined incredibly well. AquaPazza can be deceptively simple- the mechanics are easy enough to the point where you get the hang of them in a couple of matches, and, almost disappointingly enough at first, it appears that there is little variation in the corresponding attacks (both, damage dealt and damage received) across characters.

Then you realize that in an almost Super Smash Bros.-esque twist,the characters each have their unique properties and feel, related to their movement. Some are super fast, some are slow, some jump higher or longer, and every character controls differently. Mastering a character comes from not only memorizing all of her (and it will mostly be a her) moves and combos, but also by combining this knowledge with your knowledge of her movement and handling.

Of course, with only fifteen playable characters on offer, it shouldn’t take the average fighting game enthusiast that long to master all the characters. What’s that, I hear you say? Only fifteen characters? Yes, but before you get your pitchforks out, let me clarify- there is a pool of fifteen playable characters, but there an additional fifteen characters who act as ‘assists.’ Think of them as a more technical version of items and assists in Super Smash Bros.- you pick one assist up at the beginning of the match, and you can call on them during a match to help you out. They have two attacks, which range from the more direct (a direct attack or a counterattack) to ones that help you set up a chain or combo, to the more outlandish attacks, that are like ‘effects,’ paralyzing a foe, for instance, so you can go and beat the ever living crap out of them. 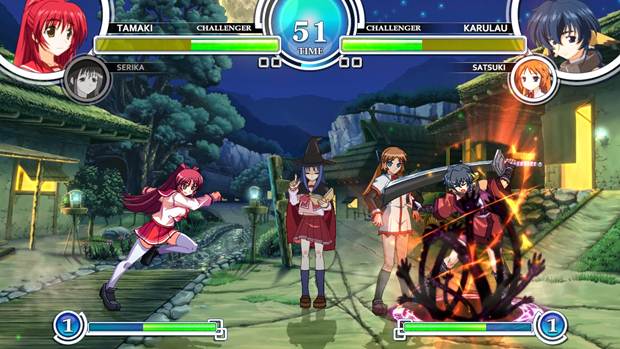 "The Emotion System essentially pushes for offensive gameplay, rewarding players who manage to push forward with multiple aggressive attacks with an emotional high, increasing the power and effect of your attacks and compounding all of it."

And all of a sudden, the possibilities open up endlessly- at first, you were just tasked with pairing the knowledge of each individual character’s movement with their attacks, but now you have to take that knowledge and combine it with each assist’s special properties. The permutations are endless, the scope for experimentation infinite. Would using this specific assist with this specific character’s this specific attack be a better idea than what you are doing now? With so many variables, and the tweaking of even one causing some drastic changes to how it all plays out, you’re probably going to experiment for a while before you settle down on a set that works uniquely for you.

All of this is before I even bring in the Emotion System- a system similar to some other fighters, the Emotion system, although it does alter the gameplay to where it might end up potentially putting an entire subsect of fighting game players off. The Emotion System essentially pushes for offensive gameplay, rewarding players who manage to push forward with multiple aggressive attacks with an emotional high, increasing the power and effect of your attacks and compounding all of it. Similarly, playing too much on the defensive will cause you to enter an emotional low, which cuts the damage and effect of your moves.

Essentially, the game pushes you forward to attack your enemy, instead of avoiding all their moves and making it an unnecessarily drawn out game of attrition, but it does end up feeling like it punishes legitimate defensive strategies quite often as well.

With so many new mechanics and systems in AquaPazza, you’d expect the game to actually ensure that the player understands the basics, if nothing else, of all of them, but there’s no such luck. The Training Mode’s name is almost a misnomer, as it does a pretty horrible job of explaining most things to the player, leaving it to pure trial and error till you actually figure stuff out. Thankfully, AquaPazza seems to have a dedicated and helpful community online that will answer your questions, but ideally, the player shouldn’t have to turn to an online forum to understand a game mechanic- it’s a failing of the game if it fails to explain said mechanics to me properly. 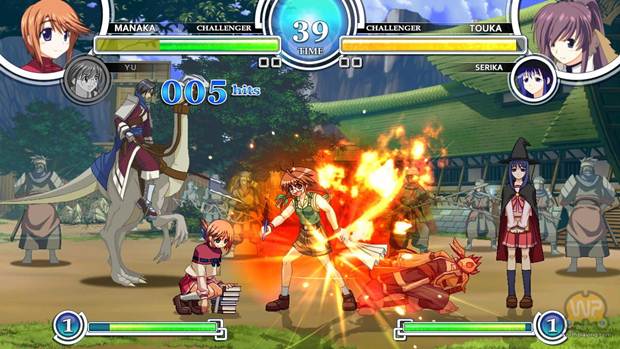 "Online, I experienced no lag, and the suite of options is really full featured across the modes, and the game in general, allowing the player to tailor the experience to their liking."

The other modes are much more satisfactory- though I will freely admit to not understanding a single thing that went on in the Story Modes (yes, modes plural, though the second one has to be unlocked), a lot of it is down to my absolute lack of familiarity with the characters and their accompanying context. This will probably be true for you as well, which can make the Story Modes a bit of a drag.

The other modes, Online and Versus, are what you would expect, and they work really well. Online, I experienced no lag, and the suite of options is really full featured across the modes, and the game in general, allowing the player to tailor the experience to their liking.

There is a lot going against AquaPazza- the characters it stars as well as its narrative arc, are completely meaningless to the western audience. The array of new mechanics it throws are likely to be confusing to the player, especially in the absence of a training mode that explains them properly. On the other hand, streamlining of genre staples is probably going to piss a lot of avid fighting game fans off. But somehow, the game comes together and creates a beautifully fast paced, unique fighter. If you are a fan of the genre, you owe it to yourself to pick this up. And with the budget price that this is offered at, you really don’t have an excuse not to.

Highly complex fighting game, with a plethora of new systems all of which add a new spin to the genre conventions in interesting ways; flexible and full featured

Sometimes seems to unfairly favorable offensive play over defensive play; the tutorials are a bit lacking

Final Verdict:
SUPERB
AquaPazza is a great fighting game that all fans of the genre owe to themselves to check out.
A copy of this game was provided by Developer/Publisher/Distributor/PR Agency for review purposes. Click here to know more about our Reviews Policy.