Let me start off by saying that Army of Two: The 40th Day is superior to the original in just about every department with the possible exception of the story.  Army of Two: The 40th Day, without a doubt, provides a generous helping of fun.  The game series has always put great emphasis on the co-operative play, so playing this game with a friend will maximize your enjoyment.   The customization in the game is extremely in depth but that applies mostly to the campaign. 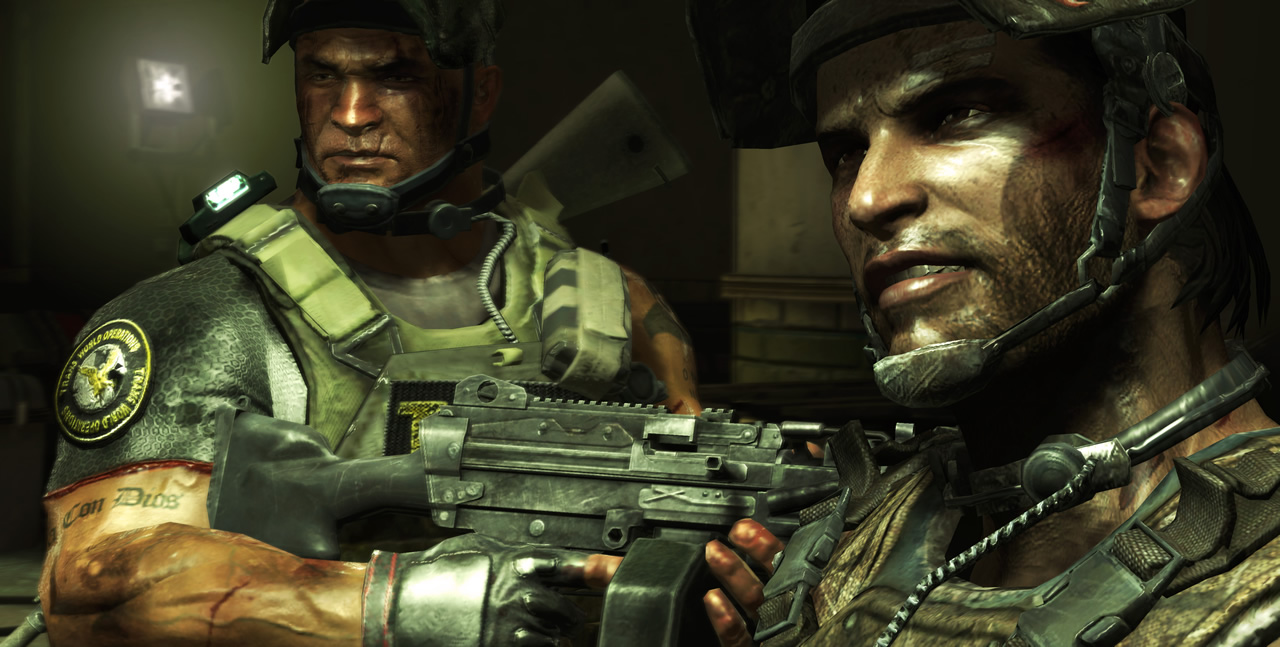 The story in Army of Two: 40th Day’s campaign is a little “all over the place”.  It can be somewhat confusing at times, and sometimes just not there at all.  While there are few games that could get away with that and still be high on the fun meter, I can say this is one of them.  There are so many new things in the campaign that you can do to go about your assault.  At times you can ‘Mock Surrender’ only to quick draw your pistol on some unfortunate enemies.  There are also co-op moral decisions you will have to make through the campaign, each one of them having a different outcome based on your decision.  You can subdue enemies, tying them up and sparing there lives, or just use them as a meat shield.  Many of the choices you make make will either give you plus or minus morality, but the only ones that really effect the game are the co-op choices.  There is even a relationship status that you have with your partner that you can control by either positive or negative camaraderie.  You have the option of giving your partner a high five or a knee to the groin among many other things such as playing rock, paper, scissors.  The campaign is, without a doubt, action packed and has some very interesting twists that are most enjoyable when playing with a buddy. 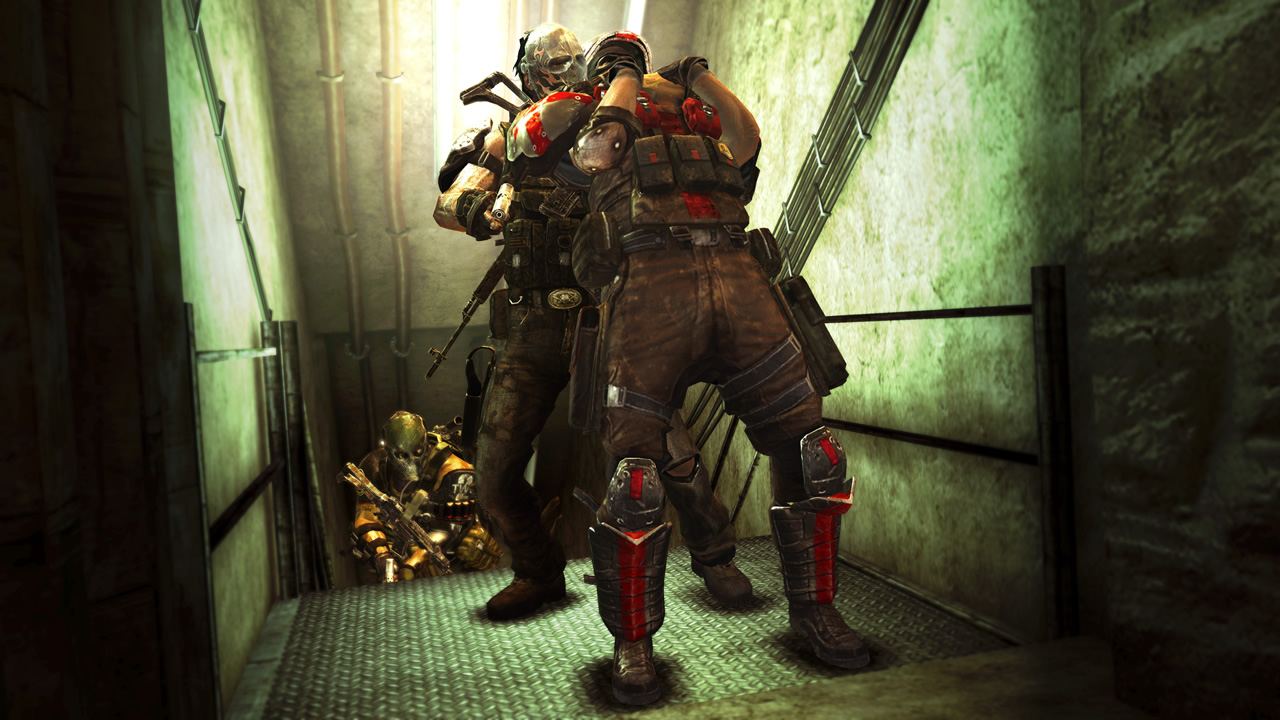 The level of customization in the campaign is amazing – from picking unique camouflages on your gun to making a gun from scratch.  You can even use parts from other weapons to make a Frankenstein weapon.  An example would be a weapon who’s parts consisted of half AK-47 and half Scar parts.  There are so many parts to choose from and even home brewed things like soda can silencers or screwdriver bayonets.  Army of Two: 40th Day also has a ton of camouflages to choose from instead of just the ‘Pimp’ gold.

One of the most innovative things about Army of Two: 40th Day is the mask customization.  You can choose from a bunch of presets or you can make your own mask on armyoftwo.com and then send it to your game, provided you have made an EA account and linked your gamertag to it.  The amount of detail that you have to work with when creating a mask is great.  You also have the option of using masks other people have made and uploaded, from which there are many to choose from.  Users have created masks from Marvel comic characters to Sponge  Bob Sqaurepants to just very original designs.  You can also wear these masks online in versus. 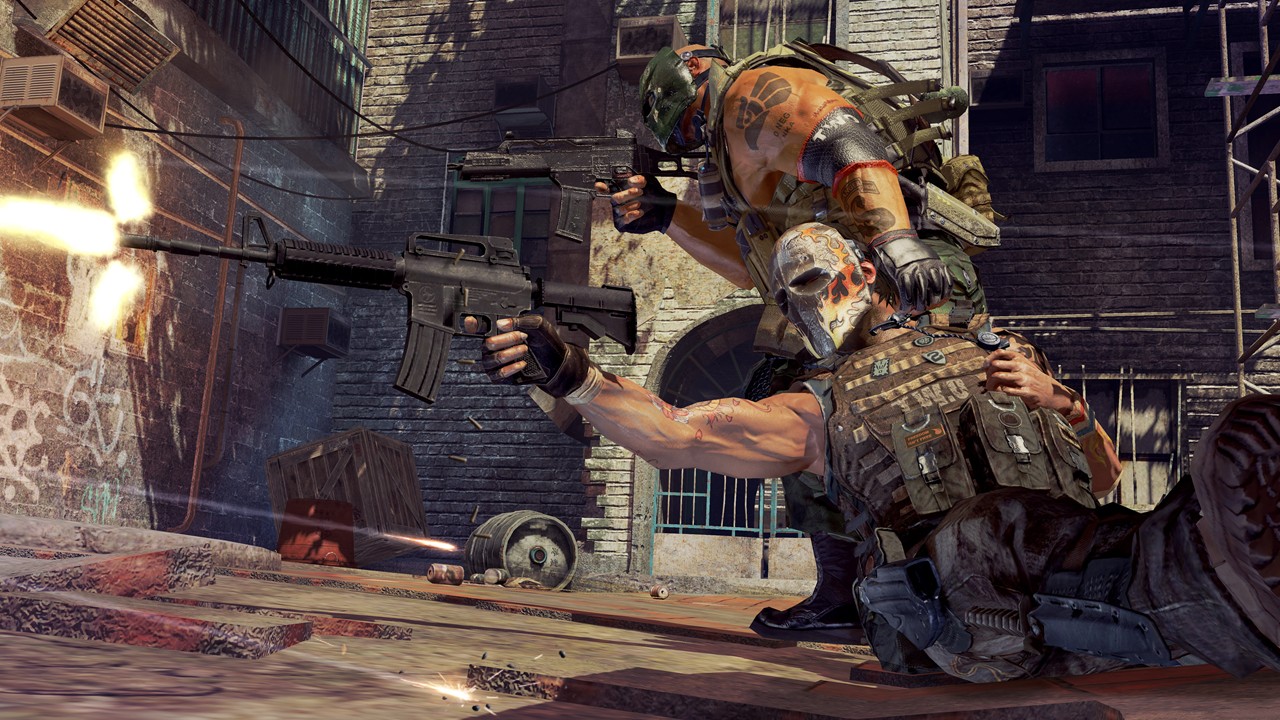 The online aspect of Army of Two: 40th Day still needs a lot of work.  There are a number of things that can go wrong while trying to play online.  Sometimes you will invite your partner to play and you will wind up on different teams.  Games can be extremely laggy at times and can make buttons and actions unresponsive.  While the connection you have to the host can partly be the reason for lag, you cannot create a public match but only a private one.  The online experience could be compared to Gears of War 2, where connection wins the match rather than skill.  At times some of my friends games would clearly have plenty of room for someone to join in session, yet I could not due to EA server problems.  Sometimes custom masks won’t upload to your game at all, or they will upload but you can’t wear them online.  The game can also freeze while your trying to join a match requiring you to restart your console.  Another thing that bugged me was the fact that there are four vs. four modes in the game yet you can only invite one person to join you.  Spawn points are a mess as you can spawn right in front of an enemy at the same place you last died.

The online play has four different modes.  “Co-Op Deathmatch” is you and your partner versus other teams of two.  In “Control” you must capture the control point and hold it until it moves to another area and plays much like King of the Hill.  “Warzone” can be a number of different mixed objective challenges from capture/defend the intel, kill/protect the VIP’s, plant/protect the bomb, etc.  “Extraction” puts you and three other people up against waves of enemy AI and rotates the map/area every four rounds.  Again, you can only invite one person to play with in a public Extraction match even though you play with three other players. 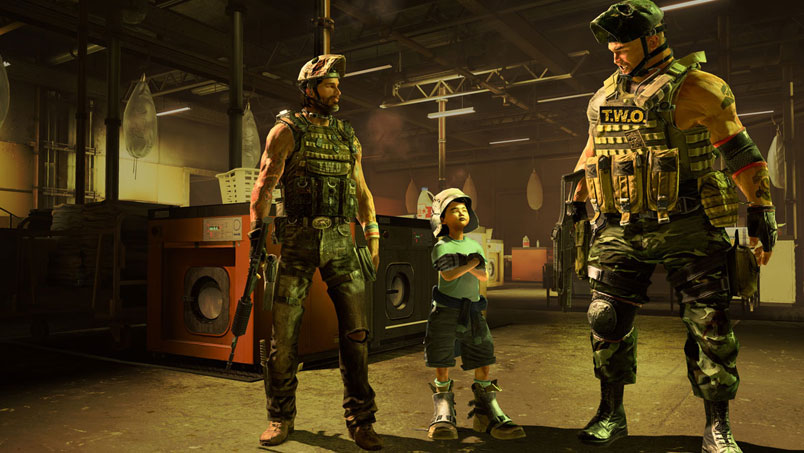 While the online is fun at times, it still needs some work and that fun will require you to have a decent connection to the host as well as a buddy to play with.  Where the game is at its best is definitely the campaign which has much replay value as you acquire more money to keep customizing your weapons and share new masks you have made with a friend.

Campaign is co-op intense fun with a lot of character customization available.

Online is rough around the edges and could use some work.

Final Verdict:
GOOD
Army of Two: The 40th Day is an enjoyable game at times, but still needs a lot of work to be done.
A copy of this game was provided by Developer/Publisher/Distributor/PR Agency for review purposes. Click here to know more about our Reviews Policy.