Ubisoft Montreal's latest just may be its greatest yet. 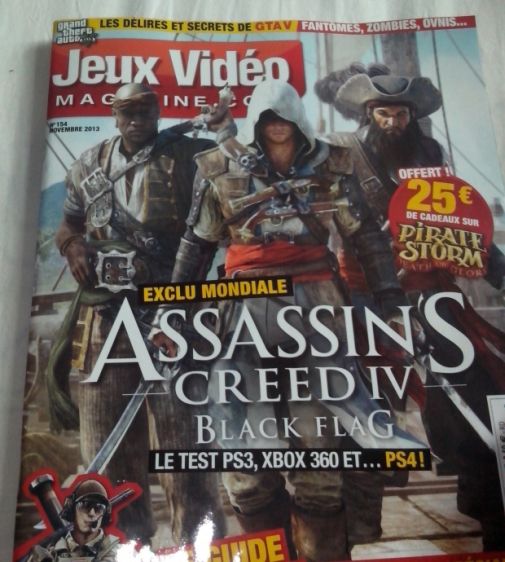 Perhaps the first review for Ubisoft Montreal’s Assassin’s Creed IV: Black Flag has been revealed. Published in Jeux Video Magazine (via NeoGAF), the game received an 18/20 score. It received perfect marks for length and soundtrack, while gameplay and graphics were marked 4/5 each.

Some of the positives about the game include the world and the sheer range of activities. Stealth also seems to be handled better this time, and you can play all main and secondary missions with stealth if you like. However, technical problems abound, with a frame rate loss on PS3 and aliasing on the PS4 version. Interestingly, the PS3 version looks almost like the PS4 version with the exception of some blurry textures and frame rate issues. No information was revealed about the Xbox One or Xbox 360 versions’ graphics.

Jeux also revealed that free running is much better in the cities, and though combat is slower, with lesser weapons and less new enemy types, the naval battles have been called “amazing”. The economic system is also easy to handle, and you’ll need to garner resources from other ships in order to upgrade your own.

Conquering forts will affect your progression significantly. Much like conquering towers and outposts in Far Cry 3, conquering forts will reveal special locations such as caves. There are also a lot of history events, though Edward’s involvement with the Templar-Assassin war has been called “a bit predictable but still well done by Darby”.

Regardless, the game has been favorably reviewed, and Jeux says you’ll need roughly 20 hours to finish the main story and 50 hours to finish everything. That falls reasonably shorter than Ubisoft’s estimates, but it’s still a ton of gameplay.

Patch 9 will arrive before the year is out. Acts 2 and 3 are also being "actively playtested" to ensure "they'...