With a domain name called “assassinscreedbrotherhood.com”, a facebook message saying “It is the time of our rising. A new age enters and a great battle looms. Templar destiny is at hand and waiting for you”, and other rumors. Could Assasins Creed: Brotherhood be real? well apparently, Ubisoft says yes.

And with a recent image sent by Gamespot to Kotaku, it shows Ezio and a couple of new figures right behind him, what’s also interesting is the text, i zoomed in to try and read it, it does confirm Ezio as the main character, and that you lead some sort of brotherhood now that you are a master assassin, but what’s really big is the confirmation of multiplayer, yes that’s right, I’m not sure what this is all about, perhaps an Add-On, perhaps a whole new game, but one thing is sure, multiplayer is a big part of it. 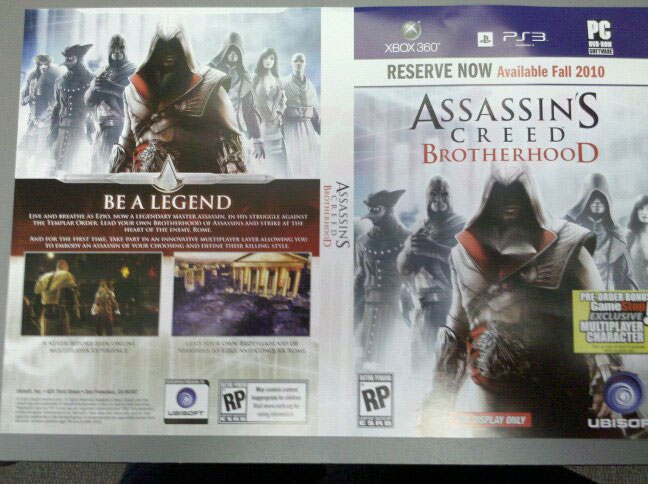 If you can’t really read it, here is what it says (i think):

“And for the first time, take part in an innovative multiplayer layer”

“Ubisoft confirms the authenticity of this image and will provide more information next week” said a rep of the company.

The game is due this fall.