Because every Assassin’s Creed game has to end with a cliffhanger we are graced this winter tide with the latest instalment in Ubisoft’s open world stealth ’em up franchise. Brotherhood adds new moves and locations to the single player experience, as well a whole new multiplayer experience that fits in well with the feel of the series.

The plot begins right where Assassin’s Creed 2 left off, with Ezio having just let Borgia live and Minerva delivering her bizarre doomsday speech to Desmond. The plot kicks off with Ezio escaping a Borgia attack on the Auditore villa after losing the apple of Eden. Meanwhile the plot also shifts to the Assassin’s in the present re-locating their base to the modern day Auditore villa after the events at the end of AC2. I found the plot back in the original Assassin’s Creed a little gratuitous and convoluted, but ever since AC2 it seems to have been really kicking off and Brotherhood is no exception to this. Admittedly there was a general feeling of deja vu that persisted on account of the narrative similarities between Brotherhood and AC2, but some added sections where you play as Desmond (who is now super bad ass) helped add a freshness that kept me hooked from start to finish. 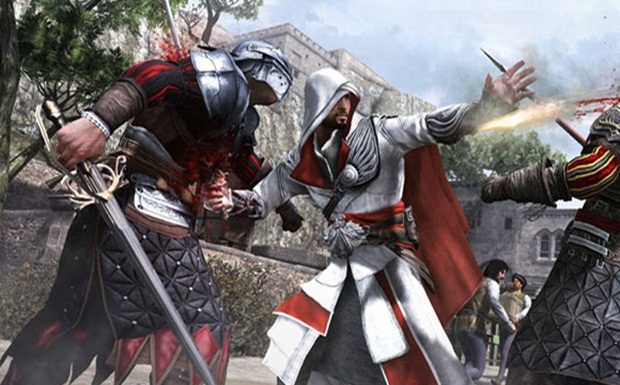 The gameplay is largely unchanged from AC2, but Ezio still has a few new moves up his sleeve…

This feeling of familiarity when playing Brotherhood is unfortunately one of the few areas where I feel the game can disappoint. As far as the single player is concerned, a large majority of the engine remains unchanged. There are definitely improvements here and there. There are more kill animations and weapons to be obtained, and the moves available while on horseback have been vastly improved. Aside from these the only major gameplay change is the use of the Assassin’s guild. The idea is that, later on in the plot, Ezio gains control of a small cell of Assassins who you can call in to help you out at will. The system is great fun and is stylish as sin, as well as having a real depth to it. You need to find citizens in distress and recruit them to your cause, and from there you need to send them out on missions to level them up. You can then call them in to assassinate your targets or back you up in battle, but if you let them die then you lose them forever. It’s a nice addition to the formula and adds a strategic depth to the proceedings. That said it also severely decreases the difficulty of the game, as you no longer have to get your own hands dirty as much. The difficulty in the combat is also a bit low, as you can keep taking hits when you’re on practically no health and you’ll just keep regenerating the final health block. It’s not a deal breaker by any means, but a hard mode would have gone a long way toward increasing the challenge in Brotherhood.

I can level as many complaints as I want at Brotherhood for being more of the same but, if I’m being entirely honest, this is actually a really good thing. AC2 was one of the best games of last year and Brotherhood expands and perfects the formula even more. The excellent free-running and the gigantic scope of the huge and multi-tiered levels all combine to make Brotherhood the best Assassin’s Creed game yet. It also really looks the part, with some beautiful animations and water effects. The sound too really excels with some class voice acting and a subtle, yet effective, score that frames the proceedings. 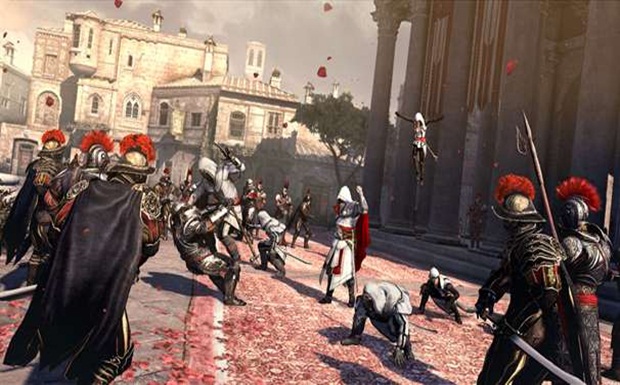 One of the aspects of games that sets them apart from other mediums (and thus what I tend to criticise most heavily upon) is their intense longevity, and Brotherhood is a game that delivers lifespan like it’s going out of fashion. Even though the single player features only the one full level in Rome, it’s a mighty map to navigate your way around with a huge amount of things to do. The single player mode will last you at least fifteen hours, and this number will spike exponentially if you decide to take on the myriad of side quests on offer. There is also one aspect of the game that will keep you coming back, and it’s also the biggest change made to the formula in Brotherhood: The online multiplayer.

I had my doubts, but I must yield that the multiplayer in Brotherhood is some of the most intense and rewarding online play I’ve experienced in a while. It fits in perfectly with the rest of the franchise’s signature gameplay, focusing more on subtlety and tension than the twitch reactions that other games prioritise. As a result of this more tactical game style Brotherhood is the kind of multiplayer game that people of all skill levels can enjoy, provided they can get to grips with the controls. Most game types either revolve around two teams taking it in turns to be the cat and mouse respectively, or they involve a free for all paradigm where you’re tasked with assassinating another player while you yourself are being hunted. Throw in a custom class system with satisfying and game changing abilities and perks, and you have one of the most innovative and engaging online experiences out there. The crowd stalking antics of Brotherhood have had a lot of love put into them, and it really shows. 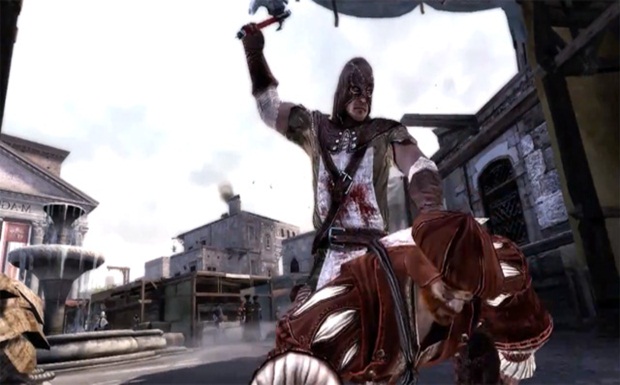 Expect a lot of stealth kills in the extensive multiplayer modes

I’ve put a fair few hours into Brotherhood over the past few days, and the fact that I’m still ready to play some more is indicative of the quality of the gameplay on offer. The multiplayer deserves a special mention for, aside from some annoyingly lengthy loading times, it is a really unique multiplayer experience in a sea of generic first person shooter titles. My main criticism with Brotherhood lies in the fact that it is more an add on to AC2, rather than a full priced stand alone title. Regardless of a questionable pricing strategy, Brotherhood is all kinds of awesome and I’d recommend it to everyone interested in a great action adventure title this holiday.

A little too similar to Assassin's Creed 2, Not hard enough on occasion, Stalking missions are still dull, Long loading times

Final Verdict:
EDITOR’S CHOICE
Whilst it fails to be the Assassin's Creed 3 some were expecting, Brotherhood refines the single player formula to near perfection and also adds a clever and deep multiplayer experience
A copy of this game was provided by Developer/Publisher/Distributor/PR Agency for review purposes. Click here to know more about our Reviews Policy.