Explore the world of Greece in this new Odyssey.

I played a lot of games at E3 this year. I saw even more games than I probably had the right to. And there wasn’t one game I saw that I can say was more vivid and full of life than Ubisoft’s Assassin’s Creed Odyssey. This Assassin’s Creed takes place in Greece during a time of open-war; where the unwavering side of good clashes with the tarnished and pungent side of evil. And in the middle? You. A person who has the freedom of choice, a man or woman who will decide the fate of the land. Will you be the hero Greece needs, or the enemy ready for your next kill? This is Assassin’s Creed Odyssey.

As I mentioned, this is the first time in Assassin’s Creed history where you’ll get the option to actually choose your character and their gender. The two characters are named Alexios and Kassandra. I have no idea if the story changes upon choosing a male or female, but it’s a cool feature nonetheless. What about a character creator, you ask? Nothing of the sort in this game. You’ll be playing a pre-constructed character from the start. What is nice about either characters, however, is the authentic look and feel of this warrior. From the brass colored armor, to pieces of red cloth and brown leather hanging along your body, the detail for both characters is immaculate. Sadly, I didn’t get to see the plumed Corinthian helmet in the playable demo, but that would have not only completed the outfit, but made it look spectacular. We all know the helmet is in there, though. Assassin’s Creed Odyssey is no longer a stealth-adventure game, but an open world adventure game with some light stealth elements. I was happy about that because I’m not one for stealth games, and what stealth was in this demo just wasn’t necessary. 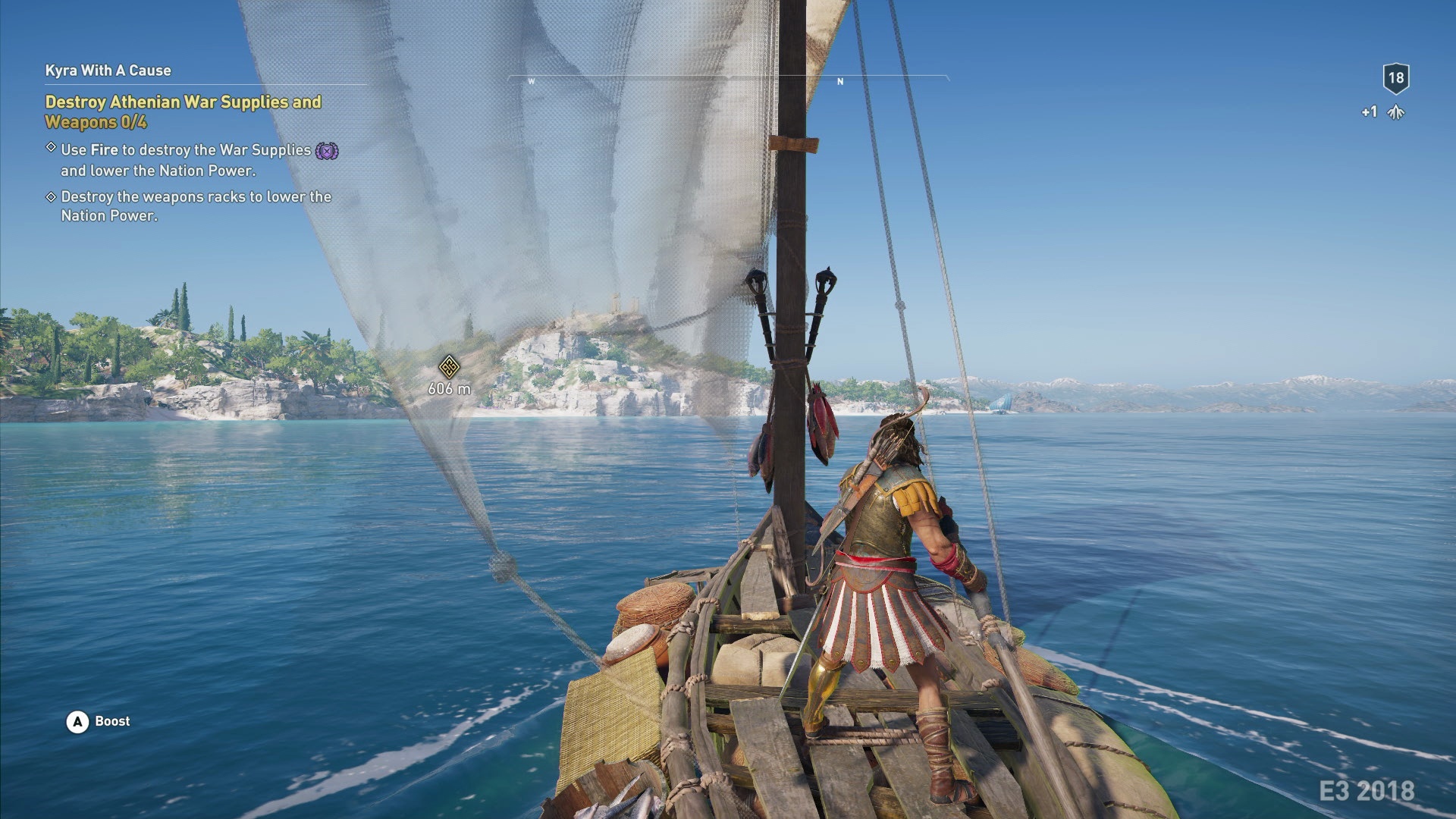 "Movement and fighting in Odyssey are improved over Origins and feel much more fluid. Where I felt Bayek of Origins moved sluggishly and his attacks a bit laggy, Alexios and Kassandra felt quick and responsive."

Movement and fighting in Odyssey are improved over Origins and feel much more fluid. Where I felt Bayek of Origins moved sluggishly and his attacks a bit laggy, Alexios and Kassandra felt quick and responsive. I was able to easily pull off attacks with the bow from a distance with the bumper button, and aiming felt smooth with the analog sticks . As enemies found me, I pulled out my trusty sword and had at them. I got hit a few times because blocking and parrying is now a must in this game just like it was in Origins; but as I got the hang of the sword after just a few minutes, it felt less constrained and more like a dance rather than an arduous fight that went on with tons of enemies. Normally when I play games that have wave after wave of enemies, I look for anything to go around or avoid them if possible. Odyssey didn’t have a series of enemy waves, but it did have a few clusters, and I actually realized I was running toward them rather than avoiding them. That’s how fantastic the fighting felt this time around. It makes you feel engaged and right into the action.

You’ll still be able to climb buildings fluidly, and sneak through bushes for a strategic advantage, but in Odyssey it never felt like a necessity. I never got into a situation or felt like there were any situations where anyone chanced me long enough to have to climb a building or run and hide.

Now let’s talk about the setting this time around. The open world of Greece is yours to explore, and I went as far and wide as I possible could. Everywhere you look, there is flora everywhere. Gorgeous vines and bushes of deep and bright greens are spread out almost everywhere. Layered on that, pink and purple flowers that give the life a vibrant feel. The sands and dirt are light and dusty and kick up when you walk on them, and surrounding this wonderful land that feels like it’s from a story book but feels so real, the ocean. The water effects in Odyssey are a spectacle to behold. With breathtaking vistas and a land that’s full of hills and architecture, no two areas look alike.

The missions available within the demo were short, fetch-quest styled stories. Go talk to a NPC, get a mission from him, go off and kill the enemy, return for a new part of the story, rinse and repeat. There wasn’t much to do besides those few fetch mission objectives. With only 15 minutes allotted for playtime, it was impossible to see everything the demo of Assassin’s Creed Odyssey offered. 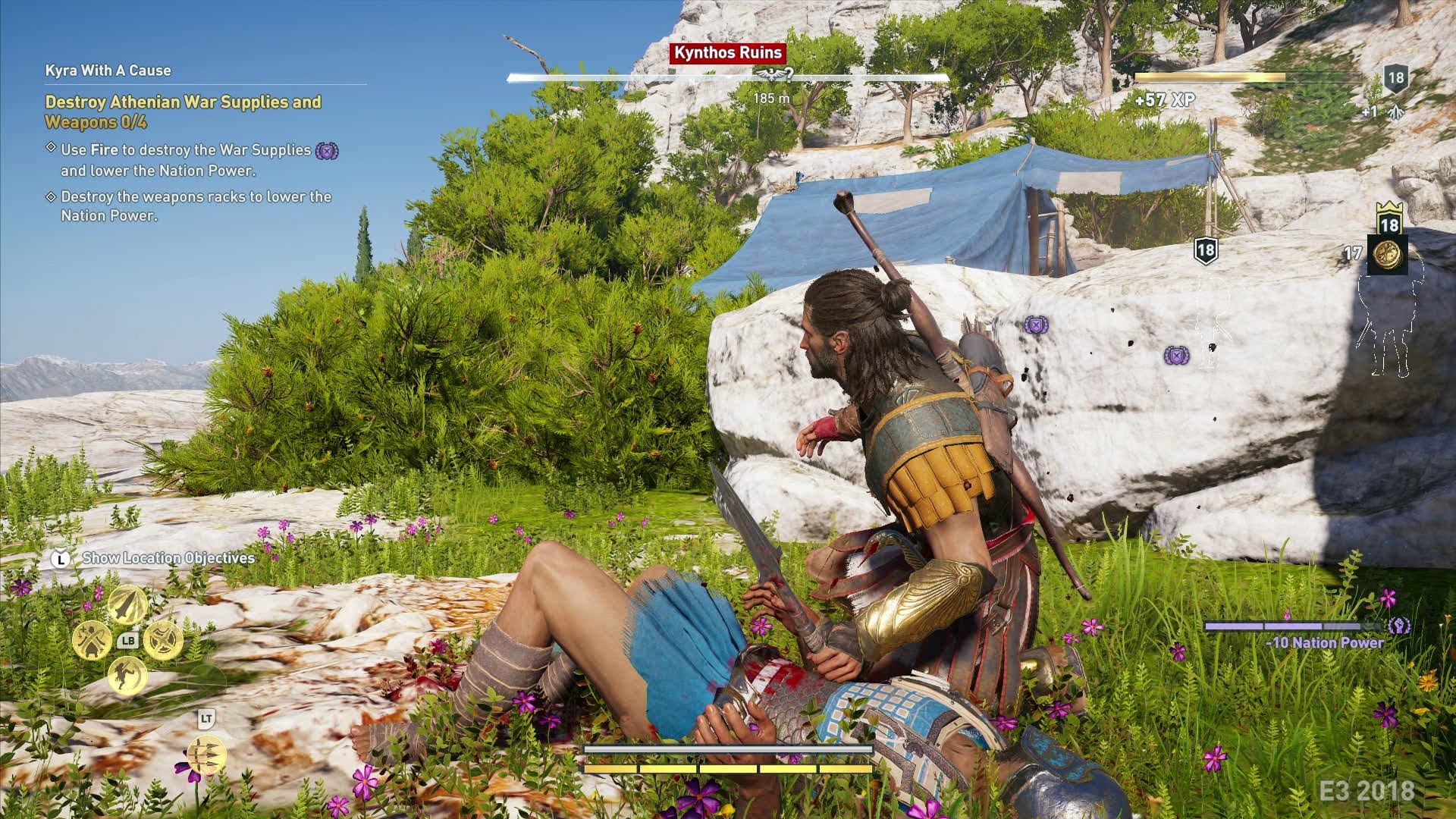 "After playing the demo, I can say with confidence that what I saw looked great and what I played felt intriguing."

People and environments had a realism about them too. From certain body gestures to movements, no one in the demo looked artificial or out of place. They each had detail and specific human-like oddities that make us who we are. The falcon also returns in Odyssey, with pretty much the same characteristics as in Origin. From flying over and seeing details to figuring out plots and enemy locations, I could fly around as the falcon forever.

After playing the demo, I can say with confidence that what I saw looked great and what I played felt intriguing. And with new customized abilities, it should add a whole new layer to a game that’s already feeling polished.