Assassin’s Creed Origins: The Curse of the Pharaohs DLC Review – A Stunning Experience

Assassin's Creed Origins' second piece of DLC is a rich and memorable addition to Bayek's story.

If Assassin’s Creed Origins was the perfect way to reinvigorate a franchise that was starting to stagnate and continually disappoint, then The Curse of the Pharaohs, its second piece of DLC, is the perfect way to bid farewell to Bayek, its leading man, who has been with us through this massive journey across ancient Egypt the entire time. Very rarely do video game developers choose to put all their efforts and love into a DLC, so much so that one could even justify it being released as a separate title. CD Projekt RED did it a couple years back with The Witcher 3’s Blood and Wine DLC, and Ubisoft have done it now with The Curse of the Pharaohs.

Unlike The Hidden Ones, which seemed more like an extension of the mechanics and ideas that were found in Origins itself, this new DLC feels like an entirely new chapter with a completely different tone and atmosphere. Sure, it retains the core gameplay loop of Origins, and has the same strengths that the base game does, but it feels starkly different from anything else we’ve experienced in ancient Egypt yet. The Curse of the Pharaohs sees Bayek going up against four ancient pharaohs who have risen from their graves and are wreaking havoc everywhere, and to beat them, the assassin has to travel to different plains of the afterlife. 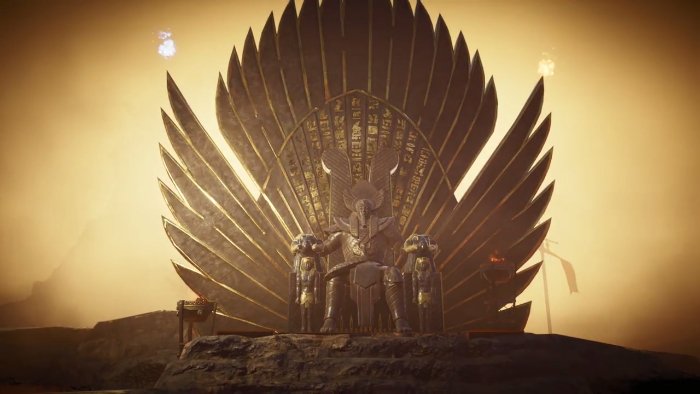 "CD Projekt RED did it a couple years back with The Witcher 3’s Blood and Wine DLC, and Ubisoft have done it now with The Curse of the Pharaohs."

The narrative is a moderately interesting one. The rich history of ancient Egypt and Egyptian mythologies makes the setting and the events in the game inherently interesting, while the unique supernatural twist on things helps too. However, much like Origins itself, storytelling often feels choppy and scattered. Writing, too, is inconsistent- many times it feels spot on, but there are also some moments when it falls flat. Bayek, of course, remains as interesting a character as he ever was, but there’s not much else to be said about the DLC’s story.

But that’s not where it shines the brightest anyway. Origins’ biggest strength was that of its setting- ancient Egypt was rendered and recreated magnificently. Every inch, every nook and cranny of the world was filled with incredible details, and the immaculate world design encouraged exploration like no other Assassin’s Creed game ever has. Such praise can be also be made for The Curse of the Pharaohs, with which Ubisoft have gone for far more supernatural narrative elements involving ancient Egyptian mythology, rather than being tethered to some semblance of historical accuracy.

This refreshing change in direction helps the DLC in several ways. Some of the more unearthly locations you visit are absolutely splendid to behold, and exploring them becomes an instant joy, simply to discover what vistas lie ahead if nothing else (though make no mistake- there’s no shortage of side activities to indulge in either). From Aaru – a paradise full of bright, green reeds everywhere – to the Duat – a dreary and hostile purgatory – every place you visit has an instantly striking and memorable visual look that lends it incredible personality, and is filled with the same amount of immaculate and precise details that define ancient Egypt in Origins too. 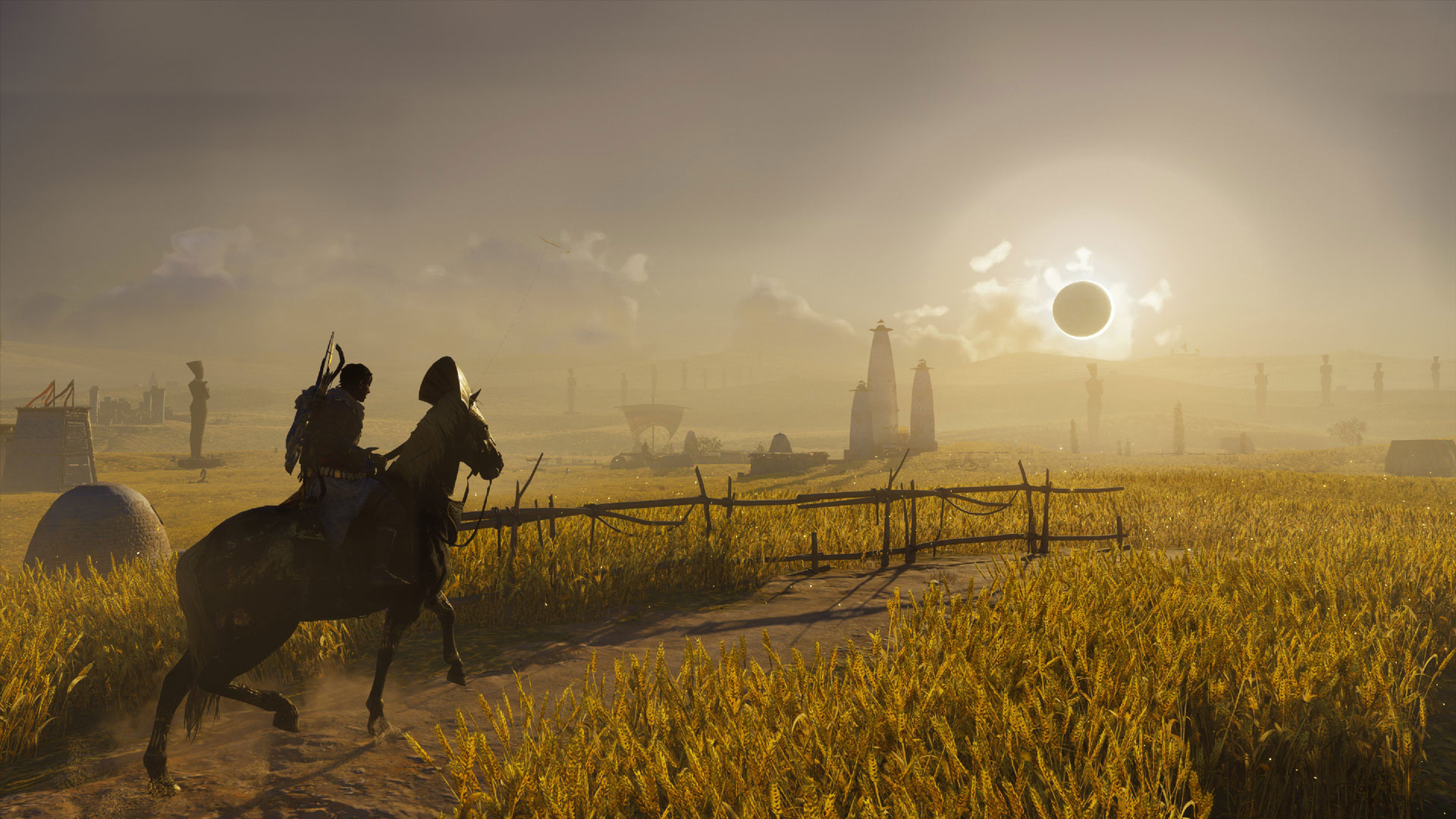 "Every place you visit has an instantly striking and memorable visual look that lends it incredible personality, and is filled with the same amount of immaculate and precise details that define ancient Egypt in Origins too."

All of the afterlife areas greatly differ from each other and anything else that’s come before. Each of these maps is respectably large, and is full of bizarre, other-worldly sights to behold, strange looking beasts and monsters to fight against, and a variety of quests and activities to undertake. Even outside of these afterlife areas, map design in The Curse of the Pharaohs is impressive. Thebes is pretty much in line with quite a lot of locations we’ve already visited in Assassin’s Creed Origins, but it’s a magnificent place nonetheless. Several structures are massive and look impressive, and surrounding areas, such as the Valley of Kings, also present interesting opportunities to explore. Side quests in this DLC also remain a strong point, as they were in the base game too.

Another area where The Curse of the Pharaohs differs from Origins a bit is the difficulty. Compared to the base game, difficulty has been ramped up noticeably. It’s not a massive difficulty spike, of course- in fact, it actually works in the game’s favour. The boss fights against the four pharaohs are excellent and will keep you on your toes, while the afterlife environments are also often crawling with dangerous enemies. And no longer are you going to be running into just bands of bandits- you’re going to be fighting against giant scorpions too – for starters – and skirmishes against these new and more fantastical enemies are always excellent.

You’ll also be taking on the Pharaoh’s Shadows this time around, who’re an interesting take on the Phylakes from Origins (or the Shadows of the Scarab in The Hidden Ones). The Pharaoh’s Shadows who can randomly appear out of thin air anywhere in Thebes. When they appear, they begin attacking and killing civilians and bystanders, and it falls to Bayek to either kill them or chase them down, neither of which is a particularly easy thing to do. At times it can be a bit frustrating to chase a Shadow across a vast part of the map, only to have it disappear on you again, but generally this new enemy type works as a great addition. 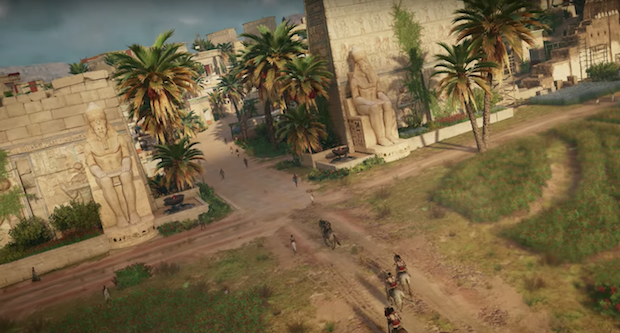 "Even outside of these afterlife areas, map design in The Curse of the Pharaohs is impressive. "

Sadly, The Curse of the Pharaohs suffers from a number of bugs. From Bayek often getting stuck in the environment’s geometry to unintentionally hilarious horse physics on some occasions, there are plenty of glitches that catch the eye, and quite a few of them are major enough that they cannot simply be ignored. Here’s hoping Ubisoft fixes these with patches soon. That said, it becomes easier to accept these concessions in trade for what is an expansion that is packed with content. It’s different and vibrant and expands Origins’ ancient Egypt setting in unique ways, and it’s got anywhere from ten to twenty hours’ worth of content. The Curse of the Pharaohs is, without a doubt, one of the best things to have come out of Ubisoft in the last couple of years.

Final Verdict:
AMAZING
The Curse of the Pharaohs' unique spin on Origins' setting and formula makes for a memorable experience.
A copy of this game was provided by Developer/Publisher/Distributor/PR Agency for review purposes. Click here to know more about our Reviews Policy.