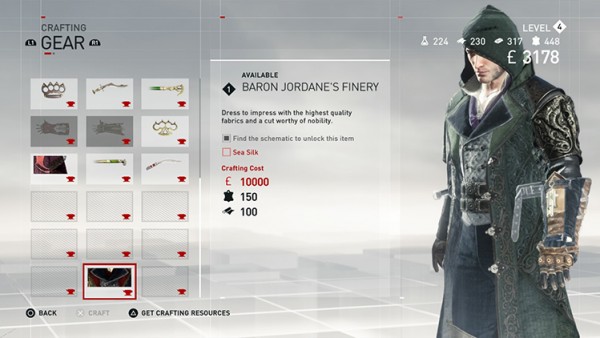 As always, players will be able to craft certain gear to get bonuses; they will also be able to upgrade items such as their bomb pouch or their overall health. However, this time around, the system appears to be more in depth. Taking a cue from a lot of western RPGs, Assassin’s Creed Syndicate will require players to find schematics or a recipe for a lot of items that they will be crafting or preparing. As always, you will also be able to find materials and recipes in chests throughout the game world.

It’s all very extensive, but of course, this is Ubisoft, so remember, some materials will be exclusive to Uplay, meaning you should probably log in and play with your Uplay account if you get into the crafting in this game.

Still, it’s nice to see Ubisoft attempt to add some more depth to the game, especially after how disappointingly sparse Unity was when it launched last year.