We interview Sanatana Mishra and Tim Dawson about their latest offering.

Love it or hate it. There is no denying that indie games development is on the rise and with Sony inviting indie developers with open arms on the PS4 it is now bigger than ever. One such indie game that is making its move to the PS4 along with a host of other gaming platforms is Witch Beam’s Assault Android Cactus.

We got in touch with the duo of Sanatana Mishra and Tim Dawson from Witch Beam to talk about what players can expect from Assault Android Cactus. Check it out below.

Rashid Sayed: First of all, can you please introduce yourself and talk a bit about Witch Beam?

Sanatana: Hi I’m Sanatana Mishra and I’m a the designer at Witch Beam, a team of three Australians who are passionate about making games we believe in, even if they are a bit niche.

Rashid Sayed: One of the features that I observed while watching the gameplay videos is that the level and the environment continuously deforms itself. Can you please tell us the mechanics behind the same and how it will affect gameplay?

Sanatana: Well each level has a central theme that runs through it, in the case of ‘Influx’ it’s a fully dynamic environment made up of 1×1 meter cubes that can transform in to any arrangement we want. It starts off fairly simple with a small enclosed environment with a few pillars and hole, but each new reconfiguration presents new challenges both in the landscape and what kind of enemies you face. For example we can drop all of the pillars away to create an open play space full of holes and unleash a ton of projectile firing enemies and turrets that create bullet-hell style gameplay as there’s nowhere you can hide. 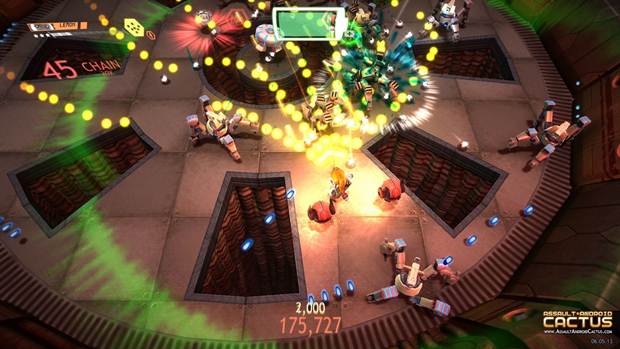 "There will be a roster of 8 playable androids, 4 of which have to be unlocked throughout the campaign. Each one has a unique primary & secondary weapon that create their play style, and we’re considering other stat changes to separate them even further."

Rashid Sayed: The game also supports co-op up to four players. How will the experience differ compared to the single player campaign?

Sanatana: We really wanted to the weapons to keep their powerful feeling in co-op play so we actually scape up the number of enemies but keep their stats the same. To keep things co-operative we share the battery energy amongst all players but a special crown appears above the player who is carrying the team, it’s sort of a competitive co-op experience.

Rashid Sayed: How many characters will the game have? And will each of them special abilities and skills?

Sanatana: There will be a roster of 8 playable androids, 4 of which have to be unlocked throughout the campaign. Each one has a unique primary & secondary weapon that create their play style, and we’re considering other stat changes to separate them even further.

Rashid Sayed: Have you guys looked into the customization of the playable characters?

Tim: There’ll be some unlockable character variants, different hats or a change of colour scheme, but it will be limited.

Rashid Sayed: How long will the game be? Furthermore, how are you guys ensuring that the game will have high replay value?

Sanatana: It’ll probably take players a few hours for the initial campaign play through but that could change drastically depending on your skill level as it’s a challenging game. For an arcade experience I would say we’re quite big but like any good arcade game we’ve focused on replay value in all of our designs: 8 characters with drastically different play styles, a full rank system for each stage, virtual currency that you can use to unlock additional content like artwork, codex entries, and EX options like Retro Camera mode that drastically change the game.

There’s also Boss Rush & Endless mode for you to tackle once Campaign is complete, full online leaderboards for the hyper-competitive out there, and every mode is playable in full co-op with up to four players. 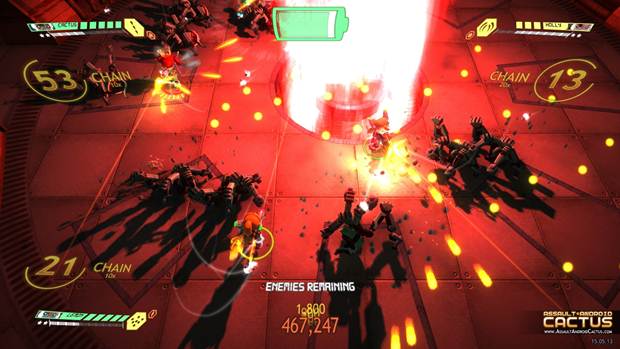 "The campaign will span 25 levels including 5 unique boss encounters, we’ll have some additional content in Boss Rush & Endless Modes and after launch we’re hoping to release a super intense version of the campaign in the vein of Super Meat Boy’s Dark World."

Tim: Part of the replay value is building a game that holds up to repeated scrutiny. You can blast through a level and enjoy it, but if you come back to a stage, figure out the spawn timings, know when the pickups will drop, try to chain multi-kills together, it still holds up. It just becomes a different kind of fun, like the whole level is a puzzle where everyone is shooting at you.

Rashid Sayed: The gameplay trailer puts a lot of emphasis on weapons. What kind of weapons can we expect in the game?

Sanatana: Our starting four characters are meant to give a good cross-section of the expected twin stick play styles, but the unlockable characters will be a lot more unusual with weapons like Starch’s Laser that has a variable beam width/damage based on distance to the enemy and the Rail Gun that penetrates targets. We’re still tweaking and testing a variety of weapons so nothing is set in stone yet.

Rashid Sayed: Have you guys nailed down on the number of levels the game will have?

Sanatana: The campaign will span 25 levels including 5 unique boss encounters, we’ll have some additional content in Boss Rush & Endless Modes and after launch we’re hoping to release a super intense version of the campaign in the vein of Super Meat Boy’s Dark World.

Rashid Sayed: The game is scheduled to be released on Steam, Wii U, PS4 and PS Vita but not on the Xbox One. Can you please let us know the reason behind the same as Microsoft seems to have a change of heart toward indies?

Sanatana: Well when we looked in to the Xbox situation around E3 there was simply no way for us to release on the platform without giving up our independence, Microsoft didn’t want to deal with a small indie like us. Now we’re locked in on 6 platforms and too busy to even consider adding a 7th. If this was always their plan as they claimed I have to wonder why they didn’t mention anything about it until a few weeks ago, even to interested developers. 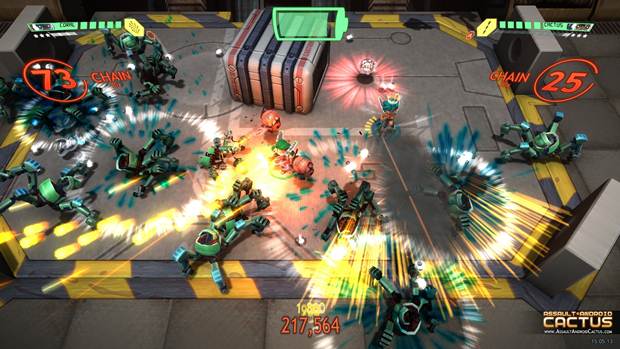 "We’re going to support cross-save and cross-buy so you only pay once for the game across PS4 & Vita!"

Rashid Sayed: As someone who is working on multiple platforms, what are your thoughts on the unified architecture and 8GB GDDR5 RAM of the PlayStation 4?

Sanatana: Honestly we’re still too early to be talking about the pros and cons of hardware choices, the PS4 is more than powerful enough to create the experience we want with Cactus and that’s what matters to us.

Rashid Sayed: Are you guys planning to use the touch pad controls of the DualShock 4 controller? If yes can you please share details about the same?

Sanatana: Unfortunately Cactus is a pretty demanding game in terms of thumb dexterity, so there’s not a lot of opportunity for the touch pad. We’re more focused on how we can use the light bar to display information (like matching its color to your android in co-op, or your health in single player) and the new rumble system will be great for feedback.

Rashid Sayed: Gaijin Entertainment the developers of War Thunder recently claimed that the PS4’s GPU is 40% more powerful than the Xbox One. What are your thoughts on the same? Furthermore has the PS4’s GPU eased out the number of things you can do on screen in Assault Android Cactus?

Sanatana: From a pure tech perspective it’s undeniable that the PS4 GPU will make it the most powerful console in the world and for us that means we can turn on every visual flourish we want while keeping a smooth & responsive 60fps. We’re focused on every version running at 60fps including Vita, frame rate is king.

Rashid Sayed: Do you plan to support cross saves on the PS4 and PS Vita version?

Sanatana: We’re going to support cross-save and cross-buy so you only pay once for the game across PS4 & Vita! 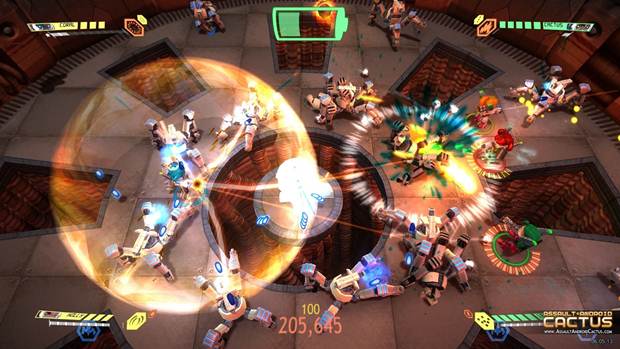 "We’re going to support the Nunchuk + Wiimote combination as a replacement of keyboard & mouse which should be a fun control scheme, other than that they should be identical feature wise and we’re still quite a ways off from the release so it’s not worth talking about graphics comparisons yet."

Rashid Sayed: How will the Wii U version differ compared to say the PS4 and PC versions?

Sanatana: We’re going to support the Nunchuk + Wiimote combination as a replacement of keyboard & mouse which should be a fun control scheme, other than that they should be identical feature wise and we’re still quite a ways off from the release so it’s not worth talking about graphics comparisons yet.

Tim: I’m itching to do something interesting with the screen! But it’s all up in the air at the moment.

Rashid Sayed: Is there anything else you want to say about the game to our readers?

Sanatana: You can check out a demo of Assault Android Cactus right now on Steam where it’s available for Windows, OS X, and Linux! We’ve also just launched on Early Access if you want to support us and give feedback ahead of our full release in November on PC and early 2014 on PS4/Vita/Wii U.