Atari cleans the dust off their classic catalogue by reintroducing Warlords to a new generation.

It’s been over 30 years since Warlords first graced the home console. In 1980, Atari expanded their catalog with a game with a cross between Pong and Breakout. Flash forwarding to today, Atari no longer makes a console, but they still produce games. Blowing the dust off the collection, Warlords has finally been brought back with a shiny new coat. Griptonite Games has taken the reigns and worked on the remake, now available on the Playstation Network as well as the Xbox Live Marketplace.

Obviously the new graphics are a huge step up with the Warlords remake. Considering the 1980 version was a top down, flat representation of something you really had to stretch your mind to accept as graphics, anything would have been considered an improvement. With that in mind, not only are the graphics nice, but there’s certainly a comical feel to the art. The style is very reminiscent of Spyro the Dragon or Jak and Daxter. The only real issue here is that those games were on the Playstation 1. Although the graphics are updated maybe they are not to current generation standards. However, if this game were to be released onto the PSP or PSVita, there would be no question about quality. 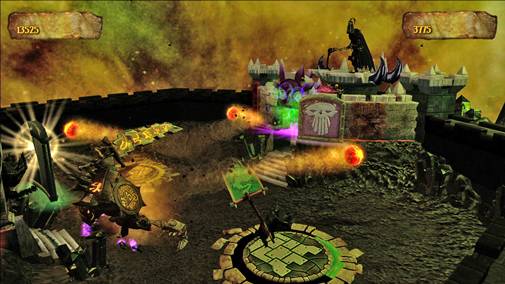 The mechanics to the 1980 game was real simple. Block your castle from a ball with a paddle. You can catch the ball with your paddle and shoot it at you enemy’s castle to knock down their walls. Once you’ve broken through the walls and defeated the warlord, you win. The remake has the same concept. Your oversized shield blocks your castle from the dragon ball. You can catch and send the ball in any direction. Once you knock down your enemy’s wall, you win.

As far as a remake goes, Griptonite could have stopped there and been happy, but it’s good to see they went above and beyond. To expand on the gameplay, Griptonite has added Snoots.

Instead of being a warlord behind castle walls, you now have an army to control. Your Snoots go full charge into battle for you and follow your Rally Snoot, the guy with the flag, to do you bidding. Although it’s easy to have the Snoots charge in for power ups, if you have some skills you can push the Snoots to either repair your walls, or attack our enemy walls. The more you strategize, the better you’ll get. To get the power ups, your Rally Snoot needs to take point, while your regular Snoots sacrifice themselves. 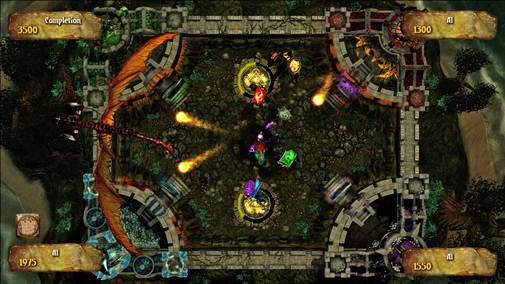 Another mechanic added comes from the dragon ball. Instead of being just one ball, in the remake round after round adds another ball. By the forth dragon ball, it gets chaotic. You can still catch the dragon ball with the shield for a concentrated attack, however the longer you hold the ball, the more damage you take on your walls. This results in balancing the danger of catching and holding onto the dragon ball for a long time.

After dealing with Snoots and multiple dragon balls at the same time, it gets hard to keep up with the game. Blocking one ball can lead to missing three others, and half the times you’ll realize that the Snoots you’ve been trying to move are actually your enemy’s, while your Snoots are busy standing in the corner. To add to the chaos, dark knights will randomly come in and attack everyone. Although you get points for taking them down, you can also strategically use them too. Since the dark knights don’t favor anyone, it’s bet to sit back and let them attack your enemy castles first, and maybe even concentrate your attack at the same time. If you hit a knight with a dragon ball, and it doesn’t kill him, the knight will instantly drop what he’s doing and go at your castle.

To take out some of the chaos, there is a tutorial level. Here, everything is explained, in depth, past the point of caring. In terms of tutorials, it’s got to be one of the longest I’ve sat through. Considering the game is short, it’s safe to say the tutorial is needlessly long, with breaks of animation of a Snoot running across a wall, stopping and running back, without any real reason, but to at least mention it here. 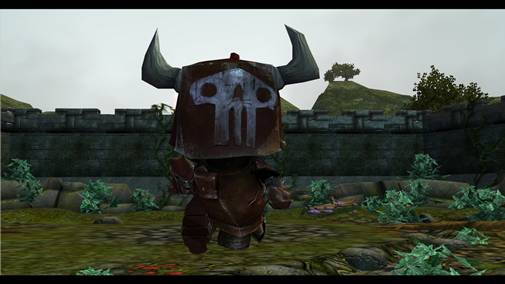 The new Warlords offer a lot of content for a remake. In single player, you can jump into a quick match, or a campaign mode. The campaign mode is short but can keep you busy for a little while but most likely knocked out in under a night.

In multiplayer, you can play online or local. With the Playstation you can play up to seven people local, however if it’s chaos with four players, I can’t imagine anyone knowing what’s going on at seven, and I’m not sure if there’s any room to play with seven at once.

In terms of remakes, the new Warlords clearly blows the original 1980 version out of the water. Despite the many years in between, Griptonite Games shows that with a few neat upgrades to the mechanics, Warlords still has a concept that’s enjoyable, and fun to play. This is a game that screams for multiplayer action, whether it be local or online. There’s no playing nice here. Tear down their castle walls, win, and gloat.

Final Verdict:
GOOD
Atari cleans the dust off their classic catalogue by reintroducing Warlords to a new generation
A copy of this game was provided by Developer/Publisher/Distributor/PR Agency for review purposes. Click here to know more about our Reviews Policy.

The first person shooter/hack and slash title will retail for $19.99 on Steam and GOG with Bright Memory owner...

New Brain Talk dialogue and combat plugins have been added along with +50 challenges that can unlock new cosme...

Gain the power of Nahobino and battle back against demons in the ruins of Tokyo when Atlus's RPG launches on N...