Atelier Lydie & Suelle: The Alchemists and the Mysterious Paintings (which I shall henceforth refer to as Atelier Lydie & Suelle, because seriously, who comes up with these names?) is a charming, sweet JRPG that fans of the genre looking for something more laid back can enjoy, and should look into. The game doesn’t actually stray too far from previous titles in the long running, highly prolific franchise – there are eighteen other games in the series – but that’s for a reason. The Atelier games have settled into an easygoing routine and formula by now, and they’re comfortable in just staying in their niche. As such, if the previous games were up your alley, so will this new one be. If the older games failed to win you over, Lydie & Suelle won’t convert you.

The story is as low stakes as the previous titles in the series: Lydie and Suelle are twin sisters who live with their father in the capital city of their kingdom, running an atelier. However, the girls are inexperienced, and their father, who seems to be the eccentric artist type, isn’t much better, and their atelier isn’t doing all that well. The girls mostly have to fend for themselves (including making and managing money and feeding themselves), but they harbor a hope to have the best atelier in the kingdom- a hope founded in a promise they made to their mother, whose whereabouts are unknown.

The story unfolds from there along two convergent paths- one is when their kingdom institutes an atelier ranking system to invite more alchemists to it, which causes the girls to start making efforts to get better at what they do; the other is when they discover they can escape into paintings. Inside these paintings, they conveniently find more materials that they can use for their alchemy to achieve great results that otherwise seem to be out of their reach. 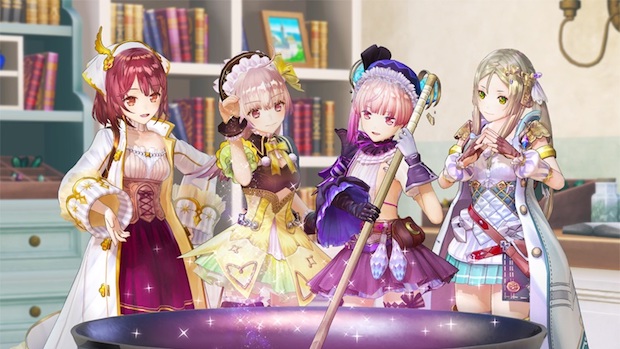 "The Atelier games have settled into an easygoing routine and formula by now, and they’re comfortable in just staying in their niche. As such, if the previous games were up your alley, so will this new one be. If the older games failed to win you over, Lydie & Suelle won’t convert you."

The story here, as I am sure you have realized, is quite different from other JRPGs, other RPGs, or really, any other story in games- rather than focusing on a central conflict where you have to come of age and save the world, or overcome some obstacle, this is a breezy and relaxed tale that keeps things mostly stress free. It’s a cheerful world with likeable characters, and it even acts as a stress buster after, say, a particularly intense bout of Fortnite or Monster Hunter.

As for those characters, they are, very largely, tropes- Lydie is the “older twin”, who’s meek, submissive, and doesn’t like confrontation, while Sue is the “younger” one, who’s vivacious, tomboyish, and mischievous. Apart from that, you have the absent minded father who can’t get his life together, the young prodigy, the childhood rival, and so on and on and on. The characters never truly grow beyond these archetypes, which can get grating, but at the very least, I can say that the tropes are done well- as long as you don’t hate stereotypes by definition, you might even like what is here for what it is.

The gameplay for the title here is similarly breezy and casual- you have turn based battles where you can use you standard attacks or your skills, with wrinkles thrown in thanks to a “positioning system”, where characters in battle pair up, with the front character acting as a wall, and the back character acting as support. It never actually gets too complicated, and the enemies never pose much of a challenge- really, the game’s battles are in keeping with the easygoing nature of the rest of it all- but battles make for a nice change of pace from the rest of it all, with slightly more engagement required than most of the rest of the game.

Other gameplay elements include alchemy (which involves gathering materials in the world and then throwing them together in a minigame to craft items), completing quests, and managing your time- because, as a slice of life game, Atelier Lydie and Suelle has a constant clock going on, and everything you do costs you time. Again, managing time never gets as stressful as it can in something like Persona, but it is an element to be mindful of. 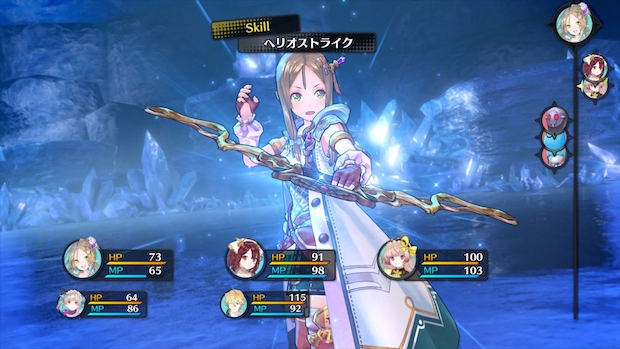 "All these elements come together to create a rather open ended experience, giving players the option to decide how their story unfolds. In fact, there are are even multiple ending paths in the story, based on what you emphasize the most in your playthrough, which can potentially lead to more replayability."

All these elements come together to create a rather open ended experience, giving players the option to decide how their story unfolds. In fact, there are are even multiple ending paths in the story, based on what you emphasize the most in your playthrough, which can potentially lead to more replayability.

This apart, the game looks fine (although it’s a fair bit blurry, and graphics never go beyond looking merely acceptable), with voice acting that I honestly did not find too good. Now, it’s in Japanese (no option for English voices), so I might not be the best judge, but I’ve played a fair few games with Japanese voices previously, and none of them have ever grated on me like Atelier Lydie & Suelle, which sounds stereotypically anime, did. The actual localization isn’t the best, either, and I spotted some sentences that were oddly constructed- but, again, in a game like this, that’s splitting hairs.

On the other hand, the music here was probably the best of the “presentation elements”- again, it’s not spectacular, it’s not even very good. Most of it is fairly generic, but what it is is catchy, and for some tunes that you will be listening to for hours on end, that’s probably the best we can hope for (outside of demanding actually great music).

Atelier Lydie & Suelle is not a great game. I would hesitate to even necessarily call it a good one by conventional definitions, to be honest. What it is the most like is comfort food- there’s nothing it does particularly well, and you know there are loads of alternatives to it that are better in most regards. But there’s something soothing an comforting about booting this up and just engaging in a low stakes, stress-free story for some hours on end every day. Given how many incredible JRPGs the PS4 already has, this wouldn’t even be near the top of my recommendations for the genre on the platform- but if you’re looking for a nice, sweet game to relax with, you could do far worse than Atelier Lydie & Suelle: The Alchemists and the Mysterious Paintings.

Nice, breezy, and easygoing story and gameplay; good replaybility thanks to the multiple endings; endearing cast of characters and catchy music; for what it is, the game is pretty well done

The low stakes story can turn players off with its meandering pointlessness; the game can be far too easy to demand engagement; doesn't look or sound particularly great; can be fairly tropey

Final Verdict:
GOOD
Given how many incredible JRPGs the PS4 already has, this wouldn't even be near the top of my recommendations for the genre on the platform- but if you're looking for a nice, sweet game to relax with, you could do far worse than Atelier Lydie & Suelle: The Alchemists and the Mysterious Paintings.
A copy of this game was provided by Developer/Publisher/Distributor/PR Agency for review purposes. Click here to know more about our Reviews Policy.