Atelier Rorona Plus: the Alchemist of Arland Review

Beauty is not skin deep.

Here’s the thing about Atelier Rorona Plus- it’s actually a fairly good game for what it is. Unlike so many other games in the past that I have had to review, which, yes, don’t appeal to me personally, and are also pretty bad at what they do, Atelier Rorona Plus is actually a fairly damn well accomplished for what it is. It is a pretty great JRPG, and in my experience, it is also the best game that its series has to offer. If you are on the market for a good JRPG or are an Atelier fan, then it’s really hard to go wrong/do better respectively, then Atelier Rorona Plus.

On surface value, that certainly doesn’t seem to be the case. In fact, it might be hard to suppress a groan when you first boot up the game, since it will remind you so much of some other, rather worthless JRPGs, which have anime artstyles and girls who appear to be shockingly inappropriately underage, with some brain dead turn based mechanics and a story that is either insultingly simple or so pointlessly convoluted that it doesn’t even bear repeating. However, just a little bit of play time reveals that to not be the case- the Atelier games go far beyond what their appearances suggest and deliver games with complicated gameplay mechanics, and stories that actually hint at some larger and more complex themes.

This is also the case with Atelier Rorona Plus, which rises above its typical mediocre JRPG trappings and actually delivers an experience that stands out, should you be inclined to give it a chance. It’s instantly noticeable when you realize that the plot of this game isn’t actually about a band of young heroes with mysterious pasts coming together to save the world that seems to so archetypically define this genre. Like all Aterlier games, Rorona Plus tells a more personal story, in this case centering on the titular character (Rorona), who is tasked with running an alchemy workshop. 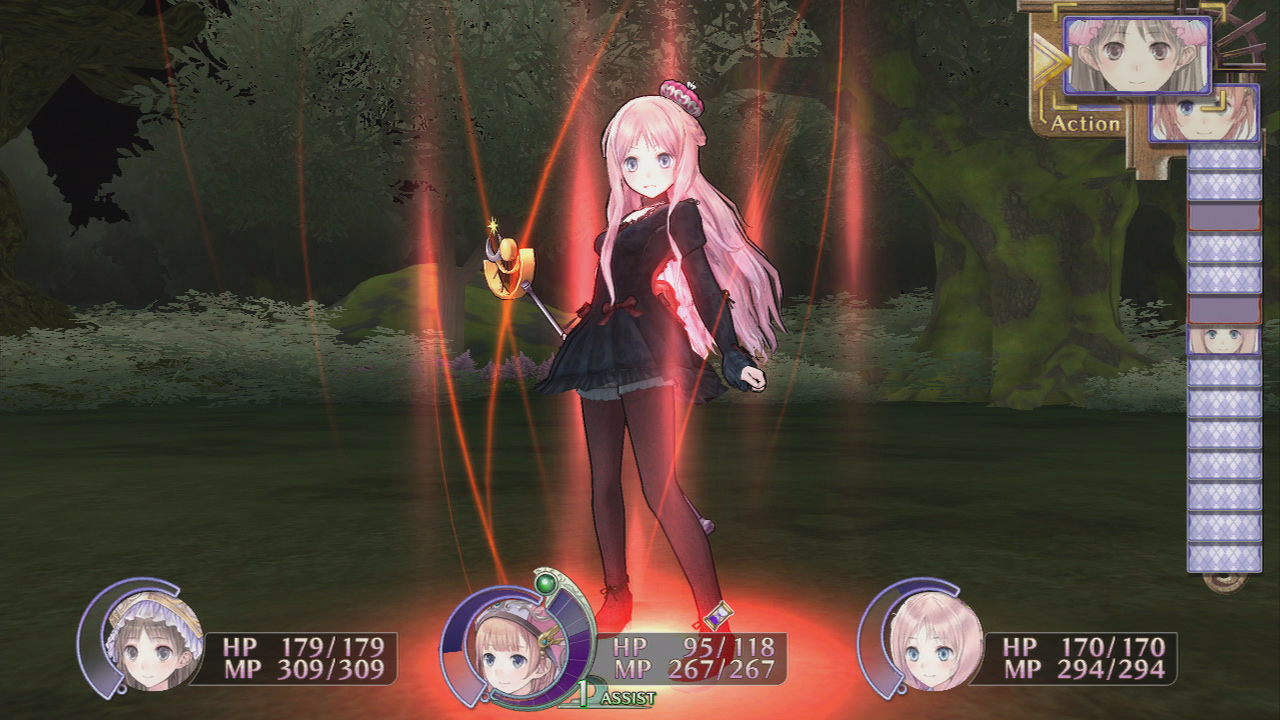 "This is also the case with Atelier Rorona Plus, which rises above its typical mediocre JRPG trappings and actually delivers an experience that stands out, should you be inclined to give it a chance."

Yes, that is the premise of this game. There is no central conflict, no saving the world, no murders to solve, no mysterious occurrences at midnight- you are simply supposed to be managing an alchemy workshop. And as that suggests, the gameplay of this specific entry tends to go beyond usual JRPG trappings and deliver what turns out to be a very compelling and competent resource management/business simulator, which comes together in a surprisingly addictive way to deliver a gameplay experience like nothing else on the market.

The conceit is that Rorona needs to keep her workshop open, and to do so, she must increasingly prove her worth as an alchemist by taking on and completing crafting requests that increase in complexity and see her travel the length and breadth of kingdom, slaying monsters and traveling to far lands often to obtain the materials that she needs to make what has been demanded of her. The reason she needs to do this is because if she fails, her workshop will be closed, to be replaced by factories. Remember what I said earlier about these games often hinting at story themes that go beyond the scope of what JRPGs usually tackle? This would be it for this one, where the central conflict hints at the age old struggle between tradition and industrialization. Of course, like so many other games in the series, the game never actually addresses or tackles these themes appropriately or maturely enough for it to be worth writing home about, but it does at least hint at the idea, which in itself is more than most games do.

One of the reasons that Rorona Plus works against all odds the way it does is because of how much charm and soul it seems to have. Its aesthetic and artstyle may seem fairly typical and pandering at first glance- and to some extent, it is- but it works because it manages to create such a realistic and involving depiction of its world. The central town hub that this story is set in, where your workshop is, comes off as a wonderful depiction, and one that you can totally invest and lose yourself into, provided a healthy suspension of disbelief. The charming graphics are supplemented by an equally charming soundtrack, though it is important to point out that neither the graphics nor the music ever transcend their ‘goodness’ to become something more, such as ‘great.’ The graphics especially come off as a bit rough, with muddy textures and the 3D models coming across as weirdly misshapen, which makes sense considering that this was the first game in the series that made the jump from sprite based 2D to polygonal 3D. 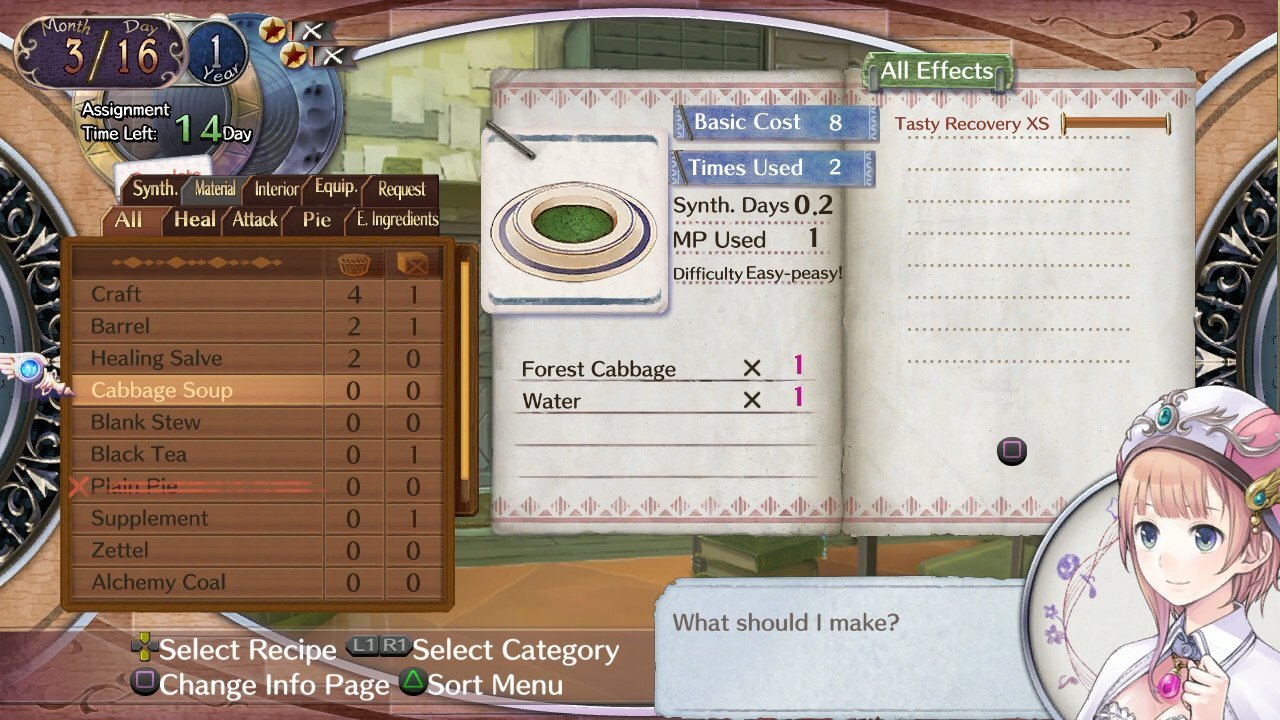 "The graphics especially come off as a bit rough, with muddy textures and the 3D models coming across as weirdly misshapen, which makes sense considering that this was the first game in the series that made the jump from sprite based 2D to polygonal 3D."

I did not ever play the original Atelier Rorona, but from what I understand, Plus represents a significant improvement over the original, with it integrating all the mechanical and gameplay improvements that came to the series with later games. This means that if you want to play this game at all, the Plus re-release is the one to go with, as, unlike so many Japanese games, in this case the improvements and benefits offered by the re-release are actually important enough that you’d want them. Another additional benefit that this version offers over the original release is Cross-Save with the Playstation Vita version, which actually works great, given the game’s design, which lends itself to handhelds very well, but still leaves the option open for big screen play.

Ultimately, there’s not much else to really say about Atelier Rorona Plus. It works very well for what it is, but what it is is extremely niche, and is sadly, unlikely to appeal to a whole lot of people. That said, I would urge everyone to give this a chance if they can- especially with the newfound popularity of hybrid JRPGs thanks to games like Persona, I think there is a legitimate chance for Atelier Rorona Plus to find a wider market. It’s charming, addictive, with an unusual premise, and is ultimately a very different game from anything you will play.

The graphics can still be muddy, the story hints at larger themes that it never seems to want to actually tackle

It's charming, addictive, with an unusual premise, and is ultimately a very different game from anything you will play.

A copy of this game was provided by developer/publisher for review purposes. Click here to know more about our Reviews Policy.
Tagged With: atelier rorona plus: the alchemist of arland, Gust, PS Vita, ps3, tecmo-koei