Atelier Shallie: Alchemists of the Dusk Sea delivers on a narrative that’s both wondrous and immersive.

Submerged in a witty charm of excitement and care-free happiness coupled by light-hearted drama and passionate characters. Atelier Shallie is a game about adventure and personality, this is highly reflected within its characters, environments, music, and graphical style. This theme carries throughout and it does well in keeping the player engaged within its world.

Following the lives of two young and very adventurous ladies, set in a world that’s buried beneath the sands of the Dusk Sea. The tale of tragedy and depression that one would expect from such a scenario is in itself all but buried, and this is down to its amazing characters and the journey that the player embarks upon.

Starting off at a fairly slow pace and presenting its first two characters under the impression that players are familiar with the lore, there’s no real background information given on the game’s main characters or any useful dialogue being spoken on who they are, other than their mission at hand in reference to the game’s main story. 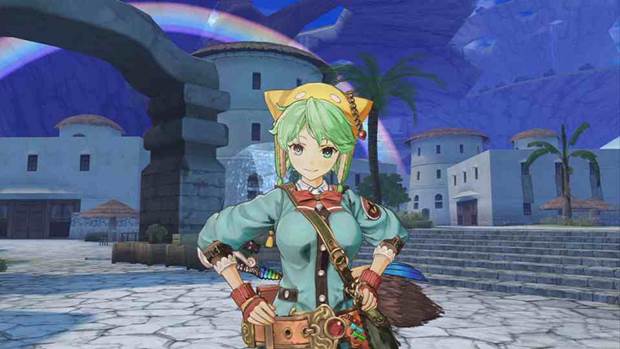 "Starting off at a fairly slow pace and presenting it's first two characters under the impression that players are familiar with the lore. "

While this sounds like a bad idea at first, one that over-estimates its reputation and awareness, it actually works in delivering an interesting prologue towards the rest of the game. After this brief introduction ends and the game fools you in to believing that these are the only two characters that players will be embodying, an interesting turn of events take place as the player is given control of an additional character.

Just like the two characters prior, the player is given little information on who she is other than her main goal within the game’s story. The game sets itself up nicely here and it delivers a stunning introductory cut-scene, before giving the player a choice of which character’s story they would prefer to experience.

The first choice on-hand follows Shallistera, a young Alchemist Princess journeying across the Dusk Sea in search of help so that she may save her village and restore water to her people. The second choice being offered to the player and arguably one that’s less interesting is the story of Shallotte. 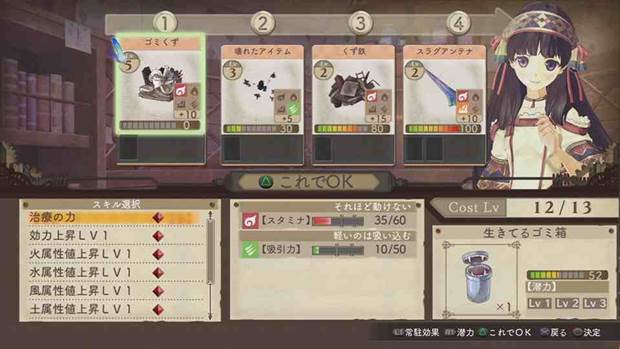 "The game sets itself up nicely here and it delivers a stunning introductory cut-scene, before giving the player a choice of which character's story they would prefer to experience."

Sweeping the streets of Stellard and taking up mundane tasks in order to get by, Shallotte is a self taught Alchemist who has big dreams of being rich and famous, so that she can support herself and her mother, as well as proving to the people of Stellard that there’s more to who she is other than being the town’s street sweeper.

Something which stood out to me after deciding on my choice of character and entering the game was its unique difficulty setting. The game does well in catering its difficulty setting in two key ways. The first is game balancing and this ties in to enemy health points, experience gains, and character bonuses.

The second of which is general tolerance the JRPG genre itself. By simplifying how the game actually plays and delivers its hints and tutorial systems within its easiest difficulty setting. This eliminates any doubts that players may have about the game being to intense for their liking. The same can be applied in reverse order for those looking to gain the full experience of the game by playing on its most difficult setting.

As the two main characters of the game make use of alchemy for their basis of combat tactics and skill progression, item crafting plays an important role within the majority of the game’s mechanics. Star fruit, gunpowder, supplements, shelbani flour, and so on all serve as materials and items that can be combined in a variety of different ways, that each produce different side-effects and benefits towards the character’s attacks, health, and strength. 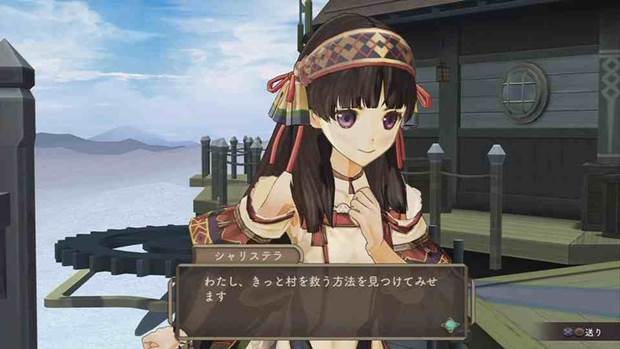 "The first is game balancing and this ties in to enemy health points, experience gains, and character bonuses."

Where materials and items can be acquired by traversing the game’s small environments and by defeating enemies, players will also come across NPCs in villages and towns selling alternative items that will not be found elsewhere in the game. Only in JRPGs will you find people selling milk, herbs, water, and trash in the same shop. No seriously, people are selling actual trash from the bin. While I would love to say “One man’s trash is an Alchemist’s….” No I really can’t do it, it’s just trash.

While there’s certainly a lot more to cover, something of which the game could do a better job in explaining. As the player is most likely going to come across more materials than knowledge on what to actually do with them, even on the lowest of difficulty players may still feel overwhelmed. It’s simple enough to just ignore these crafting elements but in some cases it’s something of a requirement, should the player actually wish to progress their character’s stats and actually push forward through the game.

Mission structure in the game works on a basis of traveling to a given location displayed on a map, exploring the divided sandboxes within the area, and complete the task that’s been assigned to the character. As these missions largely involve searching for a particular item or person, defeating the enemies that inhabit these areas, and crafting new items and skills from what the player has discovered. 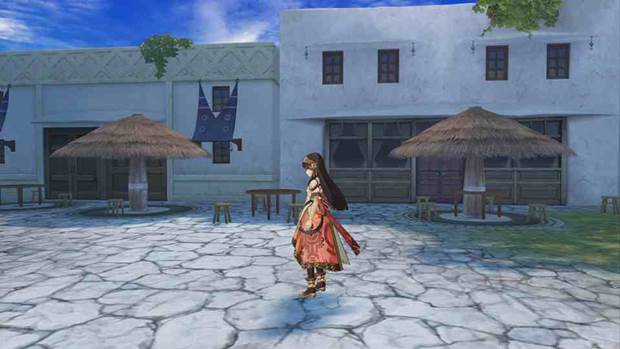 " Only in JRPGs will you find people selling milk, herbs, water, and trash in the same shop."

Even with the game’s importance on storytelling the missions themselves don’t do much in reflecting its theme and tone. At times it just felt like scavenge and craft even though there’s a lot more to it, and as good as the characters are at portraying the overall importance of these missions and how it references to the larger goals at hand, in all honesty, gameplay feels and plays like fetch quests.

Given Shallistera’s missions in the game which consist of running errands in exchange for help towards her primary goal, there’s a slight sense of irony overlooking the entire game. That’s not to say it’s not enjoyable but as to how well this can sustain the player’s interest in the hopes that the game will diversify itself is another question entirely.

Where missions do diversify themselves come in the form of side missions, these revolve around the character’s feelings and personality towards the game’s NPCs and narrative. These are divided in to body, mind, skill, and person. Thankfully these can be of worthwhile and they do well to tie-in to the main game. It’s just a shame the primary missions don’t do much in the way of standing out or being all that different from one another. 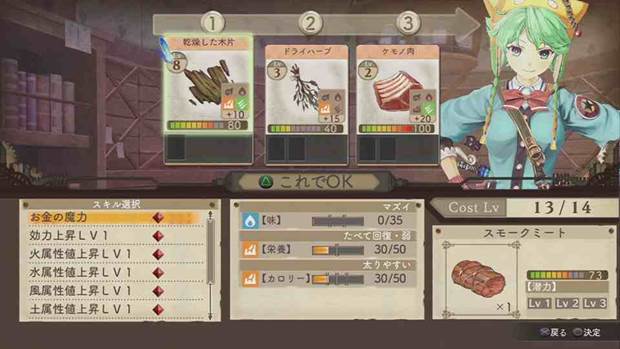 "Where missions do diversify themselves come in the form of side missions, these revolve around the character's feelings and personality towards the games NPCs and narrative. "

Working on a system of turn-based combat, players engage in battle as a party and interact using four key mechanics. Attack, defend, special skill, and run. Each being self-explanatory to their actions, damage count and player health is based on the characters own progression and side effects which come from carrying different crafts of alchemy and items.

Should players do well in battle by inflicting enough damage on to their opponents, a special group attack will be available that allows all members of the player’s party to attack as a unit. While the combat system could be improved in explaining itself in terms of how the system exactly functions, and how certain battle conditions are met, battles can prove to be enjoyable and satisfying. Assuming the player wins the given battle of course. 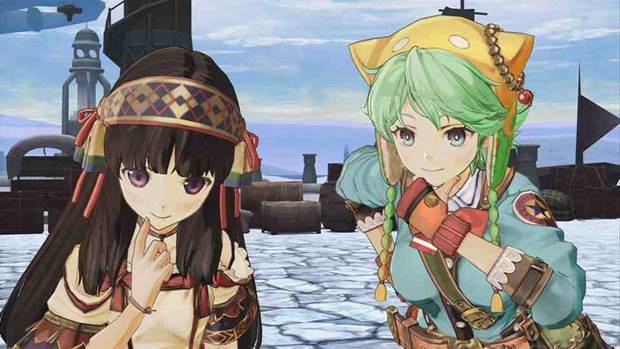 " Thankfully the game's combat system is quite enjoyable regardless, as are the enemies that the player will encounter."

Much like the rest of the game Atelier Shallie plays host to a visual style that captures both its charm and bubbly nature. Although the game’s world is small in scope, the division among such areas feels truly unnecessary, its illustrative style of colorful anime characters succeed in giving life to its world and making it feel like there’s something worth exploring, something there that’s more than meets the eye.

Due to the replayability of the game being given from its overlapping narrative that is told from the perspective of two different and interesting protagonists, there’s certainly a great deal of content here for players looking for an entertaining and long-lasting journey. One that serves in delivering both solid gameplay mechanics and a quantifiable amount of choices for players wanting to make the most of what the game has to offer.

This game was reviewed on the PlayStation3.

Entertaining characters and enjoyable combat makes up the vast majority of the game's strengths.

Replay value that's well worth the time and an interesting combat system that feels both rewarding and exciting.

A copy of this game was provided by developer/publisher for review purposes. Click here to know more about our Reviews Policy.
Tagged With: Atelier Shallie: Alchemists of the Dusk Sea, JRPG, Narrative, PlayStation 3, tecmo koie