Koei-Tecmo's President and CEO Hisashi Koinuma discusses the game's development, its performance on PS4 Pro and Xbox One X, and some of the new improvements made to the sequel.

Attack on Titan was a game that had some high expectations to match up to. The developers had to cater to the anime fans while also making the game fun to play. Even while the game had its limitations, it stayed true to the spirit of the anime that inspired it. Now, Omega Force is working along with Koei-Tecmo on a sequel to the game which will cover the events of the second season of the  anime. This time around, we can expect the game to be bigger and better with many improvements over the first game.

To learn more about the game and its development, Gamingbolt spoke to Koei-Tecmo’s President and CEO Hisashi Koinuma. 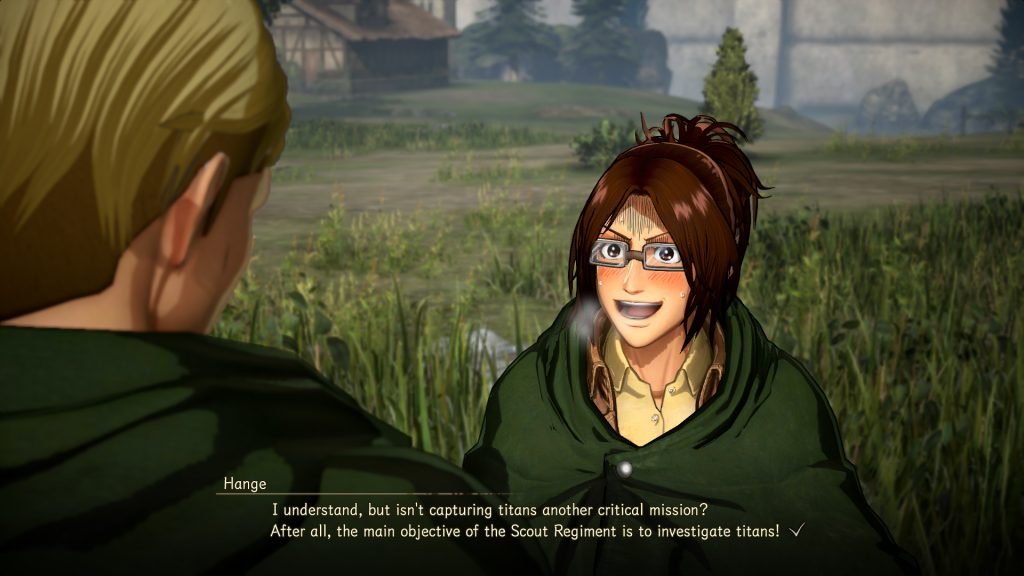 "Anime fans don’t necessarily play games, so to create a game that anime fans would enjoy was a big challenge. Working on enjoyable collectable elements, character interaction elements and other areas of the game that these fans enjoy was key to incorporate."

What were the biggest complaints from the first game and what kind of changes are you make in Attack on Titan 2?

The number of characters is what we heard, and although we focused a lot on the Omni-Directional Mobility gameplay in the first game, this time we focused on more realistic Titan action, more interactions with characters from the original anime, and online functions.

How challenging is it to make a game based on anime and then adapting it to a game?

Anime fans don’t necessarily play games, so to create a game that anime fans would enjoy was a big challenge. Working on enjoyable collectable elements, character interaction elements and other areas of the game that these fans enjoy was key to incorporate.

What kind of improvements did you made to the game’s engine, physics and the size of the world?

We improved several areas of the game such as destruction, creating realistic building destruction, the titan actions, and visual improvements (in 4K) to name a few, but we did not change the size of the world.

The game will have a central hub, just like from the previous game. However what kind of changes you have made to this hub in the sequel?

In A.O.T. Wings of Freedom the camp was just a resting place between battles, but this time players can see soldiers’ daily lives in a city format, and players can interact with characters in different places, allowing them to experience events not in the anime or manga.

The movement system has been tweaked and the Titans are much more aggressive in the sequel. What can you tell us about these changes?

In A.O.T. Wings of Freedom we focused on Scout attacks (attacking the Titans and ensuring the action felt good), but this time we focused on making the action more realistic, so we used different movements, like those seen in the manga, and improved the AI. 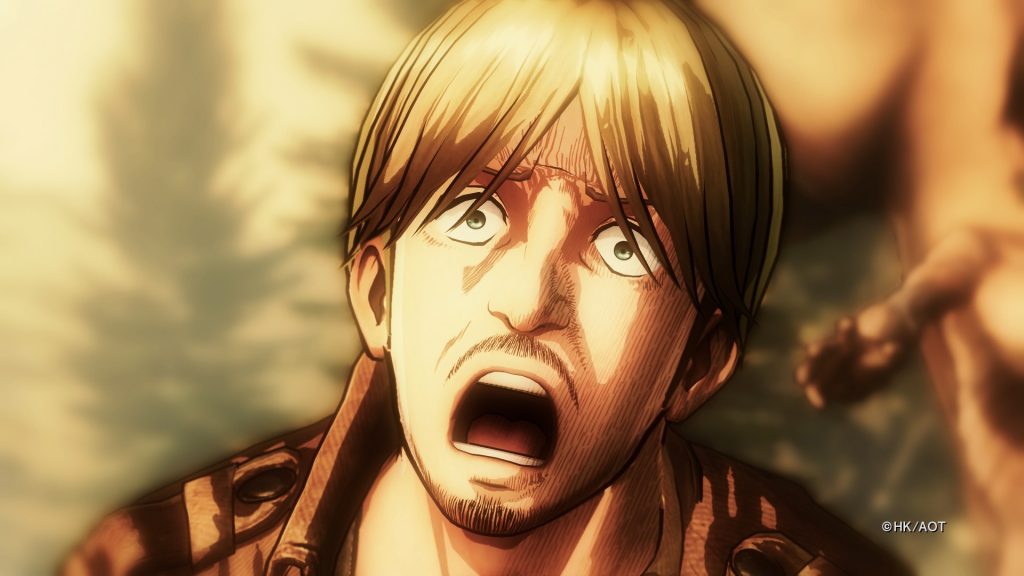 "Since the Titans are stronger and more aggressive, players can create weapons that can battle Titans of that caliber. There are also some weapons with added effects such as flames, as well as a wide array of different designs."

The Omnidirectional Movement System is one of the most unique elements of Attack On Titan 2. How did this mechanic came to be and how will it impact gameplay?

The Omni-Directional Mobility Gear movement system was introduced in the first game, and the controls were close to what was seen in Season 1 of the anime. The focus was on ease of movement and the cool feeling of being able to control it yourself in-game. This time we worked hard to ensure it was even better and more enjoyable to move around.

What can you tell us about the new skills and abilities that players will have in the game?

Some of the new skills we’ve introduced into A.O.T. 2 are the Hook Drive and Buddy Action, as well as stronger actions. There are also skills specifically for use in Town Life!

Attack on Titan was a bit easy once you learn all the gameplay mechanics. Do you think you will be upping the difficulty for the sequel?

Yes, and I think it will be according to players’ expectations!

Please tell us about the crafting system and how it will impact the gameplay.

There is no ‘crafting’ in the game but weapon development is more in-depth than the previous game. Since the Titans are stronger and more aggressive, players can create weapons that can battle Titans of that caliber. There are also some weapons with added effects such as flames, as well as a wide array of different designs. 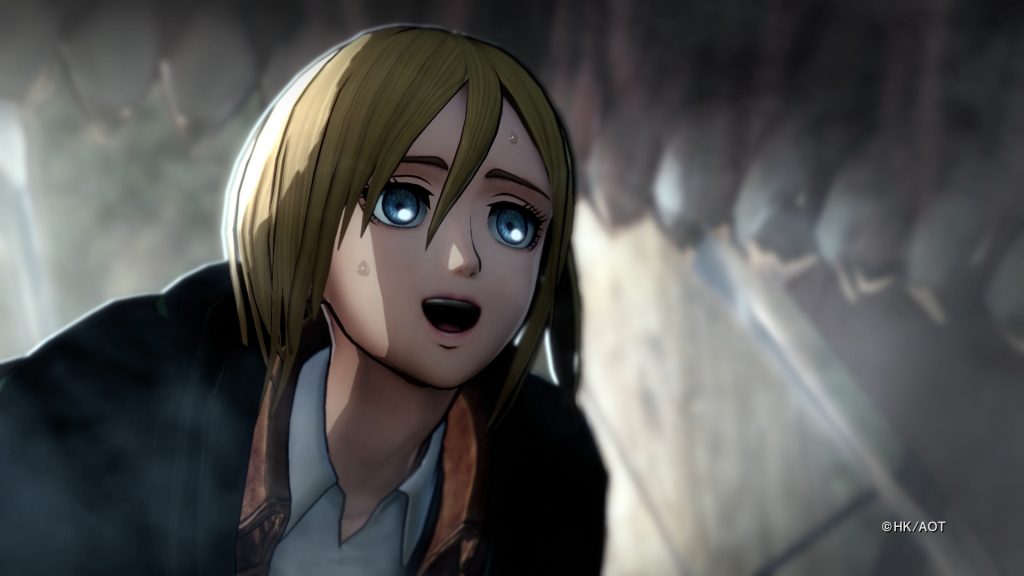 Are the environments totally destructible this time around?

What resolution and frame rate does the game run on Xbox One X and PS4 Pro? Will you have separate modes for 4K and 1080p TV owners?

PS4 Pro and Xbox One X have a higher, steadier, frame rate than the base steady 30fps. The PS4 Pro is 4K and 1080p, while the Xbox One X are according to the hardware specifications.

And what resolution and frame rate does the base versions of PS4 and Xbox One run at?

Microsoft had made it compulsory for developers to support the Xbox One and Xbox One X i.e cross compatibility. In case of Attack on Titan 2, do you think this will hold back the Xbox One X version in any way?

It had no negative effect on this title.

There are no plans to support HDR on consoles.

Finally, the second game will be released! We would like to thank everyone who played A.O.T. Wings of Freedom and provided us with a lot of feedback; thanks to this we have been able to power up this game for the fans and we hope you will enjoy playing it for a long time! For players new to the series, the action packed and intense battles against the Titans will provide an exciting experience, so we hope you will try out A.O.T. 2.