Back to Dinosaur Island 2 Interview: CryEngine, VR and Building Robinson The Journey

Crytek’s Elijah Freeman talks the future of VR, CryEngine’s role and much more.

Among the many developers to enter into VR gaming is Crytek who has showcased Back to Dinosaur Island and Back to Dinosaur Island 2. These two VR demos explore the virtual space from a CryEngine perspective, which means they push for photo-realistic visuals and realistic environments. Of course, the demos have a further function in that they’ve “inspired” Crytek’s full-length VR title Robinson: The Journey. While there’s still plenty we don’t know about the game, it seems all those Jurassic animals and features won’t be for naught.

GamingBolt spoke to executive producer Elijah Freeman about Back to Dinosaur Island 2 and how exactly it ties into Robinson: The Journey while also getting his thoughts on VR gaming in general. 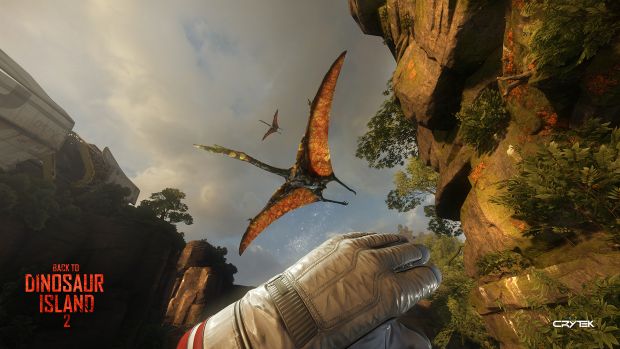 "These two demos also have a spiritual connection to the first demo Crytek ever showed at E3 in 1999, X-Isle. That demo marks the start of Crytek’s story in a lot of ways, and also featured dinosaurs roaming an island created with CRYENGINE!"

Rashid K. Sayed: Could you explain the connection between Back to Dinosaur Island 2 and another Crytek-developed VR title called Robinson: The Journey?

Elijah Freeman: Both Back to Dinosaur Island 2 and the Back to Dinosaur Island demo that preceded it have acted as inspiration for Robinson: The Journey. When we were first exploring ideas for VR demos, we felt like the Dinosaur Island theme really lent itself to the medium of virtual reality and played to CRYENGINE’s strengths. We wanted to create a world that featured lifelike environments, a sense of vastness, and, of course, huge dinosaurs—all things that could really draw players into the world and generate a feeling of wonder. These two demos also have a spiritual connection to the first demo Crytek ever showed at E3 in 1999, X-Isle. That demo marks the start of Crytek’s story in a lot of ways, and also featured dinosaurs roaming an island created with CRYENGINE!

When we say the Back to Dinosaur Island demos have “inspired” Robinson: The Journey, we essentially mean that we’re working to replicate and build on the sense of presence and awe players have experienced in those demos, but on a much grander scale and with greater interactivity. The demos offer a little taste of what we hope Robinson will become, but they should be thought of as separate experiences.

Rashid K. Sayed: Tell us about some of the technology used for Back to Dinosaur Island 2.

Elijah Freeman: The “Back to Dinosaur Island 2” demo makes full use of the core rendering features of CRYENGINE, like the physically based lighting and shading which were heavily optimized for consoles already. The demo also makes use of our highly efficient anti-aliasing solution, which is a perfect fit for the performance and quality requirements of VR applications.

Rashid K. Sayed: There have been numerous prototypes showcasing VR games in the past few years but few have approached the visual fidelity of Crytek’s offerings thus far. What challenges did you face in bringing the power of CryEngine into a VR space?

Elijah Freeman: Some of the main challenges when creating VR experiences are of course technical performance, player comfort level, creating present experiences, and in Crytek’s case – getting to high graphical fidelity. Performance and clarity of the image is about meeting the platform’s target frames-per-second, as drops in frame-rate often result in physical discomfort.

On the flip side of the same coin, reducing rendering artifacts is also a must as it will also affect the player’s comfort in a positive way. Creating present experiences has a lot to do with how you design everything to feel real to the player, and also how we aim for high graphical fidelity. Both of these factors make players feel like they are in a believable world and can interact with it. As you can imagine, those elements are often fighting each other, but it’s our job to make sure that we deliver a balanced and comfortable VR experience for everyone. 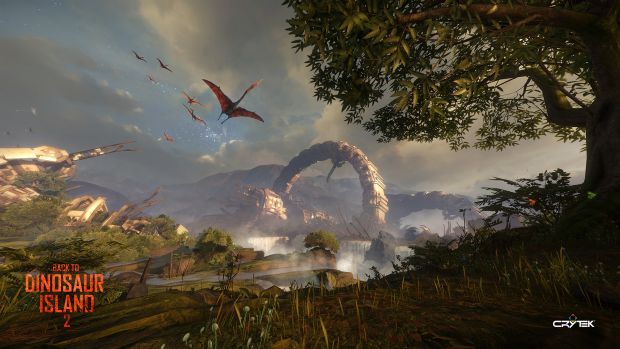 "We’re certainly discovering ways to make VR environments much more than audio/visual showcases, and I believe other people who make—and play—games will refuse to let this iteration of VR become little more than a shallow, ‘on-rails’ experience."

Rashid K. Sayed: From a gameplay point of view, what opportunities does VR open up for future Crytek games? How does it offer a deeper sense of immersion beyond actually “being there” for players?

Elijah Freeman: I think the new gameplay possibilities that open up are closely linked to that sense of immersion, or “presence” that VR offers players, but it’s true that for VR games to be really compelling going forward they’ll have to go beyond the “wow” factor people experience with their first taste. For us as developers, the challenge is how to take advantage of the fact players are going to be “in” the game world. To do that we have to rethink our approach to development—things like the level of visual fidelity needed in the world, and the immersive role of audio are essential components, but they’re just the start.

The thing that will really take VR beyond an experience that’s just about “being there” is interaction—what you do there. Players will feel compelled to reach out and touch their surroundings, and we have to support that with new development techniques that let them manipulate the world. Whether this will be achieved via peripherals, or input “tricks” devs employ, or by other means entirely, will depend on the content creators. We’re certainly discovering ways to make VR environments much more than audio/visual showcases, and I believe other people who make—and play—games will refuse to let this iteration of VR become little more than a shallow, “on-rails” experience.

Rashid K. Sayed: Comparing Back to Dinosaur Island 2 and Robinson: The Journey, we’re interested to know other things we could do in the latter when it officially releases. Any hints?

Elijah Freeman: We’re still finalizing elements of the narrative and setting and can’t go into specifics just yet!

Rashid K. Sayed: When it comes to delivering this kind of visual experience, how do you ensure that it remains the same across multiple platforms? Is it as difficult as making sure Crysis is optimized for multiple PCs in the old days or easier?

Elijah Freeman: We’re in quite a unique situation on this front as we’re approaching VR not just as a game developer, but also as an engine provider. That has helped to put us in a strong position, because we have a lot of experience in adapting to cross-platform demands—both for our own benefit and for the benefit of our licensees. We keep our game and engine teams tightly coupled, so that everything we learn as we create content is rolled back into CRYENGINE. In a way, it’s hard to quantify whether one type of cross-platform optimization is harder or easier than another—it’s just a different set of challenges.

CRYENGINE’s scalability has always helped us and our licensees to deliver across multiple platforms, and our desire to ensure the engine is considered a go-to tool for VR means we have to bring that adaptability to the VR space as well. We have support for VR development in the engine now, and recently added support for AMD’s LiquidVR tech as well. Such partnerships can further enhance the engine’s adaptability. 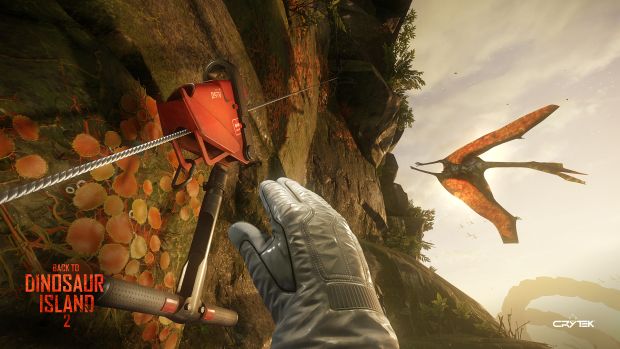 "In terms of what lies ahead, we do believe as a company that VR has a very bright future. The technology is there, the time for disruption in the gaming market is right, and the desire for the experience, as I say, has always been there."

Rashid K. Sayed: With so many different types of VR headsets releasing in the next few years – including HTC Vive, Oculus Rift and Sony’s Morpheus – what are the key differences and similarities you’ve noticed in terms of the user experience?

Elijah Freeman: Latency between head-tracking and head-movement needs to be minimal on all platforms, as this can be an uncomfortable experience otherwise. And each of these VR headsets has its own technical requirements (Sony’s Morpheus: 120 fps, HTC Vive and Oculus Rift 90 fps).

Rashid K. Sayed: How have other developers responded to CryEngine’s support for VR development? Has there been an uptick in participation for the same since the initial reveal of Back to Dinosaur Island 2?

Elijah Freeman: We’re definitely seeing a lot of interest from other developers, and have been ever since we first showcased a VR demo at Gamescom last year. We think CRYENGINE is uniquely placed for VR because of its unrivaled rendering tech, FPS heritage and Crytek’s previous work in stereoscopic 3D. We hope other developers will agree and see the engine as an optimum choice for VR.

Rashid K. Sayed: What are your thoughts on the enthusiasm and support for VR compared to, say, five years ago? Is it indicative of a popular future for the technology?

Elijah Freeman: I think people have always been fascinated by VR, and the enthusiasm today is really just relative to how close we are to seeing VR devices come to market. Five years ago was the point at which the mobile technology—at least in terms of resolution—reached the threshold that would make VR viable as a consumer product. The very first prototype for the Oculus, for example, was only created in 2011. So the excitement now simply reflects how rapidly the message has spread in that short time.

In terms of what lies ahead, we do believe as a company that VR has a very bright future. The technology is there, the time for disruption in the gaming market is right, and the desire for the experience, as I say, has always been there. VR has the potential to transform the way we play games, consume entertainment, and more—it can immerse us in new worlds and open up new modes of storytelling like nothing before it. I definitely think it’s here to stay. 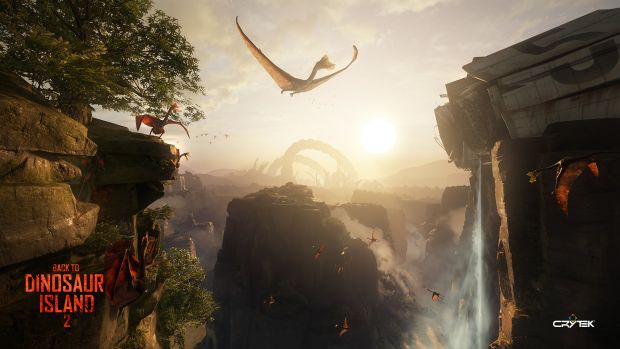 " From an engine technology perspective, VR is mostly about being able to run consistently at high frame-rates, which results in some major challenges for rendering optimizations."

Rashid K. Sayed: When can we expect Robinson: The Journey to finally arrive? Will Back to Dinosaur Island be making its way to VR players in some other form before then?

Elijah Freeman: A release date for Robinson: The Journey still has to be confirmed and Back to Dinosaur Island 2 will remain a demo for now.

Rashid K. Sayed: From a development perspective what kind of changes do you think DX12 will bring into VR gaming?

Elijah Freeman: From an engine technology perspective, VR is mostly about being able to run consistently at high frame-rates, which results in some major challenges for rendering optimizations. Everything which helps to make draw calls more efficient is highly useful, so DX12 with its reduced API overhead and better parallelization capabilities can definitely play a part in helping us create more complex VR worlds than before.

Rashid K. Sayed:Do you think there is potential of using the cloud along with VR gaming? The recent Crackdown 3 demo by Microsoft shows there is massive potential but what is your take on VR?

Elijah Freeman: Minimizing latency is essential for VR, so we will likely not see VR games being fully rendered in the cloud any time soon. However, some complex simulation code for which lower frequency updates are acceptable could well run in the cloud and free up resources on the player’s machine, helping to achieve higher frame-rates.

Rashid K. Sayed:Is there anything else you want to tell us before we let you go?

Elijah Freeman: We will be sharing more Robinson: The Journey news on http://robinsonthegame.com as we go.

Tagged With: Back to Dinosaur Island 2, CryEngine, Robinson: The Journey, VR