I have been waiting for Backbreaker to release for a very long time now. I think I originally saw it in a subscription to a gaming magazine I had purchased nearly 2 years ago. Finally I got my grubby little paws on the demo and within the following weeks I will actually have the full copy. For now, I get to give my opinions on the demo that I downloaded from the Play Station Network. I really have a lot of good things to say about Backbreaker, as well as some negative things, but nothing too harsh as I will later explain. For now, if you haven’t played the demo then go ahead and do that quickly, it’s a pretty small download. 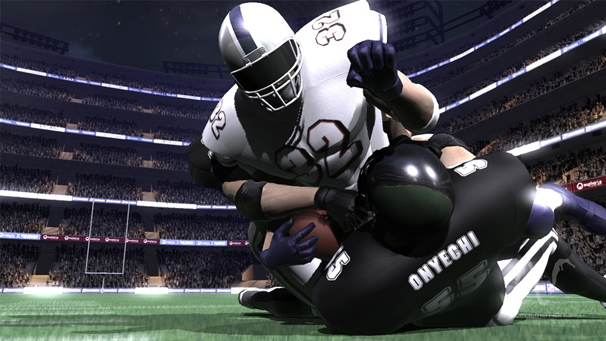 Up close and real personal.

My first impressions of the game are heightened by my absolute infatuation with the song “New Noise” by Refused. It’s the perfect blend of epic build up and power driving chorus. The demo also features the song that insists that the “boom” is coming, and let me tell you that the intigration of music in the actual game play is absolutely one hundred and ten percent perfect. My knees got weak, and my butt started to sweat as somehow the timing for hits and kick-offs are perfect. Nothing gets a hardcore gamer with good taste in music in the zone like a synced out soundtrack.

Graphics are lacking in some areas, and really good in others. Ill look more into that when I can actually fully examine Backbreakers in its entirety. As far as I can tell it almost looks futuristic. The pads are not traditional and the stadiums are pretty crazy as well. You can choose night, day, and rain, but no snow. That’s possibly just a demo thing but who knows, developers have been known to pull a head scratcher or two from time to time. 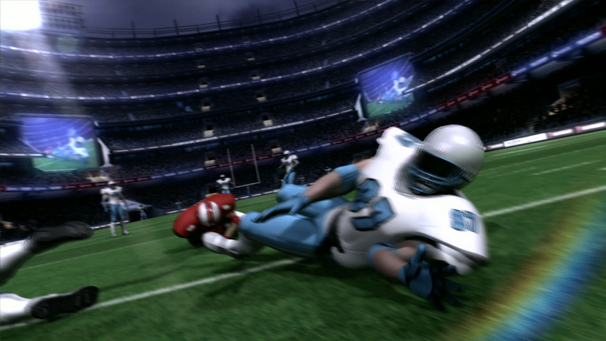 The main goal of Backbreakers in my opinion was not to make a successful football game although they may have, but to really cut out all the horse malarkey and make a damn good physics engine. Its real good, and from what I can tell there aren’t many glitches in it. The contact is great and clipping is kept at a minimal, once again when I can actually get my hands on the full version here shortly Ill look into gratuitous amounts of detail on all the skimmed topics above.

It’s a whole new way to play football, all I can say is that if you’re a Madden fan don’t get ready to jump off the bandwagon. Just be ready to play football in a way that you could have never imagined before. It’s a weird set-up but the more you play the more fun it becomes. It’s absolutely worth a download so go get the demo and start crushing some backs.