Bastion was released on Xbox Live only a few weeks back, and it caught out attention. We played it, and we loved it. Not only did we think it was the best downloadable game of this year, we also thought this is, perhaps, the best XBL game you’re ever play, other than maybe Shadow Complex. Now, the game has come over to the PC. Is it still as good, or does it get even better? Or is it, perhaps, bafflingly inferior? Read the review to find out.

Bastion is one of the most beautiful games to have been released in recent memory, downloadable or no.

In Bastion, you take control of a kid named… well, The Kid. You often travel to a world called… Bastion (as the name suggests). The story is basically this- you wake up to find that the world you knew has been destroyed completely in an apocalyptic even called the “Great Calamity.” Your only hope for survival is to travel to the island called Bastion that hovers above your own world. Bastion, though, is “under construction” right now, and you have to collect shards for it to be completed from all over the world. The story, as you may have noticed, is pretty generic. So, the story is generic, the protagonist has a, well, stupid name and everything you have read so far in this review points to the fact that this game, in fact, is not that good. Why the high score, then? Because none of these flaws matter at all. Bastion is just too darn fun for you to care about flaws as petty as these.

As soon as you jump into Bastion, you notice not the narration, not the story, not the apocalyptic feel of the game, but the wonderful visuals and that artistic flair they boast of. Bastion doesn’t have hyper-realistic, super-HD graphics with crisp textures or superior animations. No, Bastion is, technically, a very ordinary looking game. It’s the artistic flair of the game that makes it stand out, that makes it more than just another face in the huge crowd. The graphics are simply beautiful, and please your eyes from the very moment you glance at them. The art designer of the game must have spent months and months on working on this project, because never have I played a game with such beautiful graphics.

The visuals, though, aren’t even highlight of the game. You would expect a typical action RPG to slowly and gradually introduce you to the setting, give you some background details. You’d expect the action to be slow and gradually pick up pace. In Bastion, that is not the case. From the very beginning, you’re thrown into the heat of things, battling against one horde of enemies after another, or doing something or the other that pumps more adrenaline into you than an adrenaline shot itself.

The action is high on testosterone. That’s the only way to describe it. You take your two weapons and a shield and a special power, and you battle against platoons of enemies on your own, slicing and hopping your way through, dodging attacks or evading projectiles shot at you, while trying not to slip off a cliff or a bridge. It gives you great satisfaction to fight your way through an entire horde of enemies, and the varying difficulties throughout the game make battles all the more unpredictable and fun. 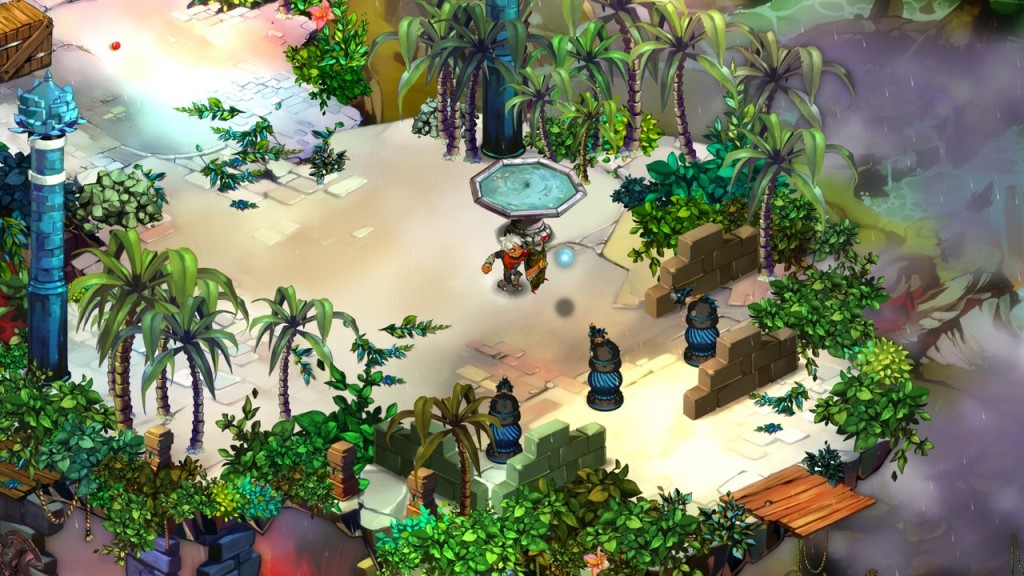 The combat in Bastion is mind blowing.

Do not, however, make the mistake of thinking Bastion’s combat is just hack-n-slash. It has more to it than you can imagine. First of all, there’s upgrading. You can upgrade your weapons in areas like offense or defense or critical hits. You can customize them so much so that they start to feel like extensions of your own self sooner rather than later. However, the fact that you can only carry two weapons at a time can feel a bit restrictive. If this were a shooter, it wouldn’t have been so weird, but you don’t expect something like this in RPGs. Even so, weapon customization still is deep and a hell lot of fun.

Then there’s also the fact that you gain XP at the end of every battle. You can use the XP to, of course, customize your weapons, or customize yourself. You can upgrade your stats, grow in the direction you want to, make your own strengths and weaknesses. It’s all really addictive and again, fun. Using XP, you can unlock larger sweeps for your sword, or lighter yet deadlier hammers, or more powerful arrows for your bow. You just never run out of ideas, and the two playthroughs I did of the game were completely different in terms of the weapons I had and the way they were customized.

You can also equip tonics to yourself. These are little items that give you the edge in battles in several areas or boost several stats. The more XP you gain, and the higher level your character is, the more slots you have to equip tonics. 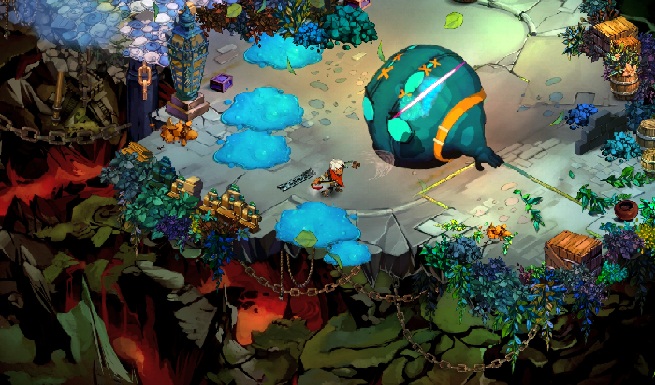 This isn’t just routine hack–slash affair. There’s a lot more to Bastion than meets the eye.

What supports this combat system in a great way is the brilliant level design of Bastion. Each and every level begins not with boring cutscenes or long drawn journeys. You get into the action right away and start killing things, or solving puzzles, or passing through obstacles or stuff like that. Each level is neither too long, nor too short- they’re perfect doses of fun and thrilling action that keep you wanting for more and keep you hooked to the game till the end, so that you want to play the next level desperately to know what the game has in store for you. You don’t even have to go through contrived journals and codex entries or watch cinematic cutscenes to know what the hell is going on. The narrator keeps telling you things all throughout.

Some sections of the game where you enter a dream world are wonderful. Here, you fight off waves and waves of enemies, and in the end of each of these levels, the narrator reveals a vital piece of information regarding The Kid’s past. You not only have to, but want to play through all these sections (because they’re darn awesome and fun as hell) to not just slice through hordes of enemies, but also find out exactly what is up with our protagonist.

The game also delivers the apocalyptic feel perfectly. There’s always the sense of decay around you, yet the graphics are enough to prevent the game from being bleak depressing. The sound design is also great, and the voice acting of the narrator, who comments on everything– whether you’re walking or jumping or there’s some crucial point in the story- is simply outstanding, and a great deal of fun to listen to.

The PC and the Xbox 360 versions of the games are basically similar, but I’d say the PC version gets the edge. The fact that we can use our mouse to aim with our projectile weapons rather than having to resort to the game’s auto-aim mechanic is a great plus in the PC version’s favour. The added portal goodies give it the edge too. Overall, the keyboard/mouse controller setup is better than the regular Xbox 360 Controller setup, though you can play the game with a gamepad. System requirements are also pretty low for the game, so any normal PC will be able to play the game. 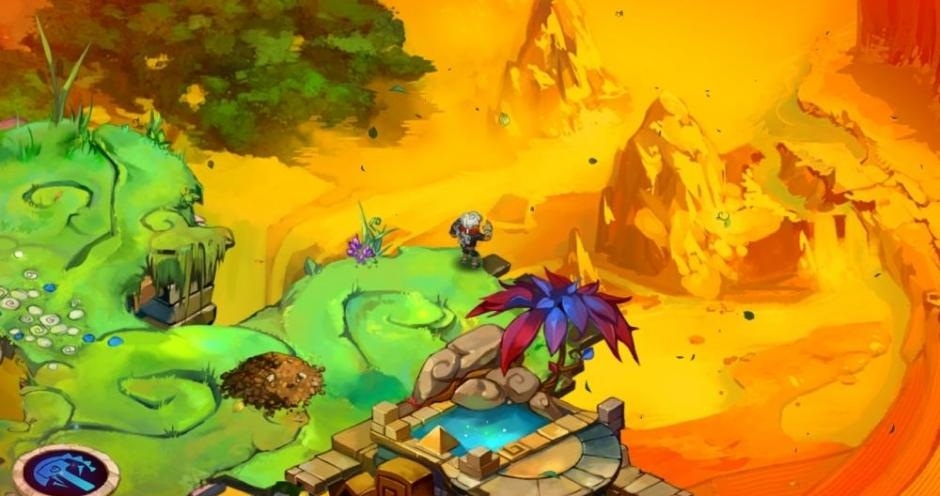 Don’t think over it- do yourself a favour and get Bastion.

Ultimately, Bastion is, most probably, one of the best downloadable games ever, up there in the rankings with the likes of Shadow Complex, Limbo and Braid. It’s action packed, it’s deep, it’s addictive, and it hasimmense amounts replay value- you’ll be returning not just to play through the multiple endings, but to start a new game with your old data via “New Game +” as well. One thing is for sure- once you bask in the glory and magnificence of Bastion, you won’t want to pull out.

This game was reviewed on the PC

Wonder art style gives a remarkable flair to the visuals; Brilliant sound design; Character and weapon customization is greatly detailed and addictive; Combat is thrilling and fun; Level design is awesome, each level being tight, to the point and focused; Gets you straight into the action from the beginning; Listening to the narrator is a whole lot of fun; Lots of replay value; Mouse/Keyboard controller setup is very good, feels more organic and fluid

Story is generic; Two weapons restriction seems out of place for an RPG sometimes

Final Verdict:
EDITOR’S CHOICE
One of the best XBL games ever is now one of the best PC games ever too.
A copy of this game was provided by Developer/Publisher/Distributor/PR Agency for review purposes. Click here to know more about our Reviews Policy.