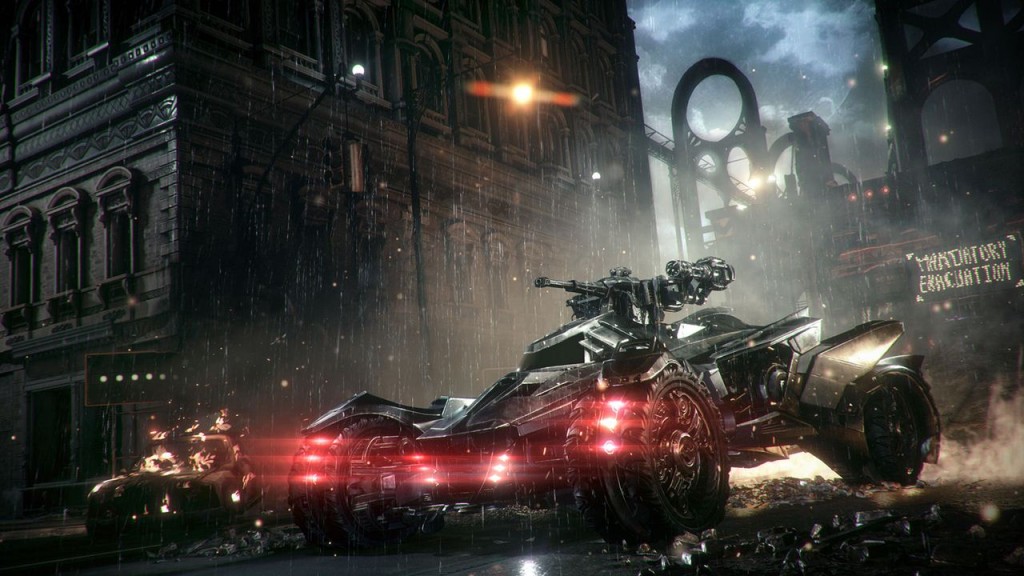 With the currents of speculation still churning away beneath Batman Arkham Knight and its enigmatic new enemy, Rocksteady Studios and Warner Brothers have seen fit to loose some details about the new Batmobile and it’s various stages. As we all know, and is reiterated upon by Gaz Deaves, the social marketing manager from Rocksteady, “Batman’s car is such an important part of his identity” and it’s come in many different shapes and sizes.

In an interview with GamingBolt he detailed the Batmobile. “When we first started looking at ideas for new elements to build into our third Batman game, everyone immediately got very excited about the possibilities of adding in a drivable Batmobile. But it wasn’t until we got a few tech demos and experiments running that we realized we were onto something quite special that felt like a natural extension of the Arkham gameplay that we’ve been creating and refining since 2007.”

“Batman’s car is such an important part of his identity, and it’s been interpreted so differently by so many different writers and creators. We really felt this sense of obligation to show what our version of the Batmobile would look like – and give players the unique experience of driving that car.”

“The Batmobile is Batman’s most powerful gadget, and it’s useful in all kinds of ways depending on the situation. Pursuit Mode gives you access to the afterburner and ejector seat – you’ll be using it to get across the city quickly, and also to chase down suspects and outrun hostile forces. Battle Mode raises the Batmobile’s turret, making the heavy weaponry available. In Battle Mode you can also activate the car’s gadgets like the power winch, which can be used to manipulate the environment by pulling up ramps, tearing down obstacles, and more.”

“The Batmobile is an essential ally for Batman in dealing with the events of Batman: Arkham Knight. There will be points in the game where players will need it to deal with some of the challenges, and some parts where you don’t have access to it – but you’ll probably wish you did!”

Even the Batman has gotta go fast.