Battle: Los Angeles was released as an arcade game for the PC, Xbox Live Arcade and the Playstation Network.  It was set to coincide with the film, titled the same staring Aaron Eckhart, Michelle Rodriguez and Bridget Moynahan.  The movie was directed by Jonathan Liebesman and written by Christopher Bertolini.  The film did not do miraculously in the box office so I am sure how you can imagine how the game fair.  But with the well known fact that video games made from films never do well this could be a slight exception, especially with it being released as an arcade game.  The game in not jaw dropping but for an first-person shooter arcade game, it was not all that bad. 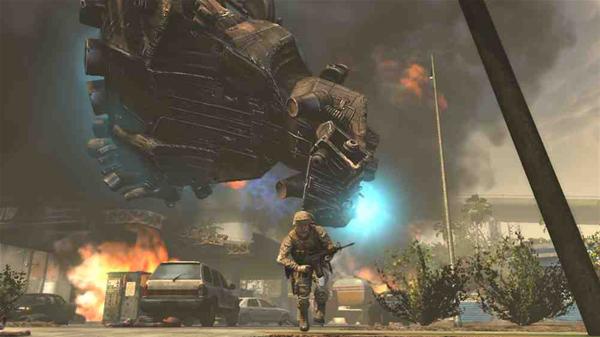 The story of the film and the game is of course how aliens come to destroy us because that is what aliens do.  Happens all the time, at least in film, games and books.  Ah yes books, does anyone remember those things?  Do they still give you them in school or do they just give you iPads?  Well way off subject already, the story is very basic in the game with the not so unexpected twist at one point, you are basically looking at your average Independence Day(it’s a movie)  game just not quite as good.  There are no actually cut-scenes, I mean no cinematic ones, they are all just comic book strip type pics shown in sequence with bubbles of speech coming from the character, along with real audio which was a plus.  Speaking of audio, characters like Michelle Rodrigeuz were well drawn out in the cut-scenes but the voices were clearly not the actors doing the voice overs.

The game actually has a lot of action in it but there is one huge factor that is a real problem in this game and that is its length.  I could literally beat the game on easy in around 20 minutes or so.  Of course it does take longer on higher difficulties and the enemies become harder to kill.  Of course you won’t be happy to hear that if your a console player the difficulty Achievements/Trophies do not stack.  You will have to beat the game on hard to the the hard Achievement/Trophy and beat again on easy for the easy Achievement/Trophy as the same goes for normal.  However every time you beat it on a different difficulty you unlock things like videos, pictures, concept art/video and what I though was the most interesting was the Mods that you unlock.  You can unlock ‘Hollywood Mode’ and ‘Double Phsyics’, which are quite interesting making the game much more fun.  The graphics of the game are actually pretty good for an arcade game, all the aliens and explosions were very life like. 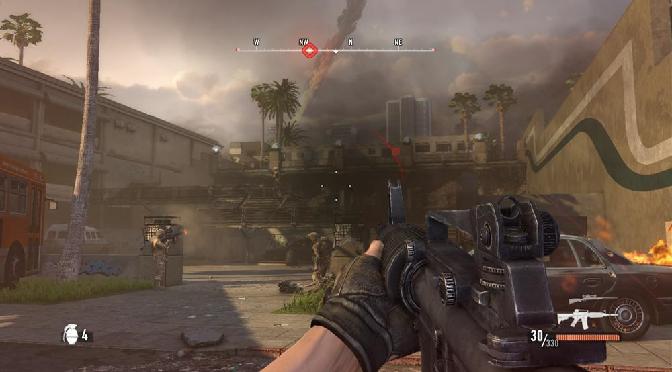 The game mechanics are pretty basic and have a bit a fine tuning they good have used.  While reloading you can’t really do anything else like through a grenade for instance.  Every action you do whether it is climbing a ladder or reloading must be done while no buttons are being pressed and you are still.  Through out the game you will find three weapons, with your M4 Assault Rifle and Sniper being your main weapons, you will come across a Rocket Launcher during portions of this short game.  The Sniper in not very accurate and could not be more slow as not only is it a bolt action requiring you to de-scope on every shot fired it takes forever to zoom in but you can change you sensitivity along with a whole bunch of other option to suit your needs.  You also can sprint for such a short time that you would have never made into the marines.  Sprint for too long which around a whole second and you become winded and walk slowly for a couple of seconds.  That aspect is entirely unnecessary and might have even been a way for them to add length to the game in cheap way…. just kidding.  Unfortunately your M4 has no scope or red dot sight, only the iron sight which I never understand why they give modern day soldiers guns with iron sights in games.  Anyway that is basically your whole arsenal, two guns, a rocket launcher and frags which the alien seem to be very resistant too.

In a nutshell Battle: Los Angeles is not the best game but it has its moments.  It is really the sheer length of the game that holds it back for the most part.  With no multiplayer, such a short game is not going to cut it for that long.  On the other hand it is a decent adaptation to the film and when you are killing those aliens, it’s fun and action packed as well as graphically impressive for a downloadable title.  You get to mow down aliens on turret guns and shoot enemy ships down with missiles.  If this game was cheaper it might even have a higher score, but 800 Microssoft Point/ $9.99 for a 30 minute game is not my idea of a fair deal.  So I can not say that the game is worth the price but you may want to try out the trial and pick it up when it goes on sale.  If you loved to film to death and couldn’t get enough of it you may want to grab this but otherwise, your just not getting your bang for your buck.

Way too short. No multiplayer. An arsenal of three weapons.

Final Verdict:
FAIR
An alright adaptation of the film, definately better to see the game as an arcade title rather than a retail one. Although Battle: Los Angeles is short it is an FPS that holds up to its end with graphics and good mechanics.
A copy of this game was provided by Developer/Publisher/Distributor/PR Agency for review purposes. Click here to know more about our Reviews Policy.