A robust multiplayer component and engaging gameplay makes DICE’s latest title one of the better Battlefield games in recent years.

With ever changing market scenarios and increasing development costs, most game developers these days will stick to an established formula, essentially something that will appeal to a wide range of demographics. So you will see a lot of games these days that  are set very far into the future with jet packs, high end weapons and augmentations. However, DICE decided to do something different. With Battlefield 1 they went far behind…almost a hundred years back by setting their next game in the World War I era.

It’s no secret that the Battlefield series has gone through a hard time in the last few years. After Battlefield 4’s launch debacles and the generally underwhelming gameplay in Hardline, fans were clamoring for something different. The World War I setting is a refreshing change of pace not only for Battlefield but also for video games in general.

"Lasting for over six to eight hours, depending on your play style, the different War Stories follow a non-linear narrative structure trying to string your hearts with emotional depth along with some of the best voice acting we have seen in recent Battlefield games."

The single player in many ways succeeds in showcasing the brutality of World War 1, telling a fairly intriguing tale of the origins of modern warfare through an adventure filled campaign which can be breathtaking at times. Unlike the previous entries in the series, the single player campaign of Battlefield 1 places its emphasis on telling a tightly interwoven narrative about the horrors and heroism of The Great War. Without spoiling much, the prologue is easily one of the highlights of the campaign; however it’s slightly disappointing that DICE is not able to maintain that consistency in the proceeding chapters. This is not to say that the campaign fairs badly but we wonder what it could have actually turned out to be if DICE would have maintained its focus on the campaign mode.

Lasting for over six to eight hours, depending on your play style, the different War Stories follow a non-linear narrative structure trying to string your hearts with emotional depth along with some of the best voice acting we have seen in recent Battlefield games.

The campaign takes you across the world amidst exploding tanks, buildings getting destroyed and a ton of soldiers dying. If there is one thing that Battlefield 1 sets it apart from modern shooters is its fantastic art style and design, all backed up by top of the standard sound editing. Be it the sound of your machine gun or the soldiers shouting during intense situations, the attention to detail could be quite phenomenal at times.

"Last year’s Star Wars Battlefront set a new template of how far video game graphics have come in the last few years and it’s safe to assume that Battlefield 1 has managed to hold to that standard."

DICE are known to push visual fidelity in their games and Battlefield 1 is no exception. Last year’s Star Wars Battlefront set a new template of how far video game graphics have come in the last few years and it’s safe to assume that Battlefield 1 has managed to hold to that standard. Be it the intense dogfights and unexpected encounters on snow capped mountains or riding in a Mark V tank and wreak havoc, Battlefield 1 excels in delivering excellent level structures which are not only wide in size but are also smartly designed.

It must also be noted that Battlefield 1 compromises on some details when compared to historical data. For example, the game offers the player with many automatic weapons, something that was not as prevalent in World War I. The story too is fictional which strays away from the historical accuracy. These kinds of inconsistencies are expected….DICE obviously wanted to make its game as accessible as it can, after all.

If you are a new comer to the series, we highly recommend playing the Campaign mode first before jumping into the multiplayer. The War stories are a great way to acclimatize yourself to the game’s extensive multiplayer offerings. In many ways, the campaign does a great job of educating the user about the different intricacies behind the concepts of multiplayer gameplay.

If you are a veteran Battlefield player, you will find yourself investing a major chunk of your time into the game’s various multiplayer modes. Starting with the excellent Operations mode, Battlefield 1 puts you across several maps under real events that happened during World War I. In this mode you will have to attack the defenders on each map, and capture the last sector in the last level. In other words, you will have to push the defenders sector to sector within each map and finally push them out of the final section. On the defensive side, you will be holding your ground as you try and kill as many attackers as you can. The inclusion of gigantic Behemoths adds a bit of dynamicity to gameplay, twisting the tides at times. There is also a bit narrative angle to the Operations mode, as it adds a decent amount of historical context to the proceedings. Overall, Operations mode is a fantastic new addition to the game’s multiplayer offerings. It’s an awesome hybrid of the Conquest and Rush mode bringing in battles that could last for an hour. 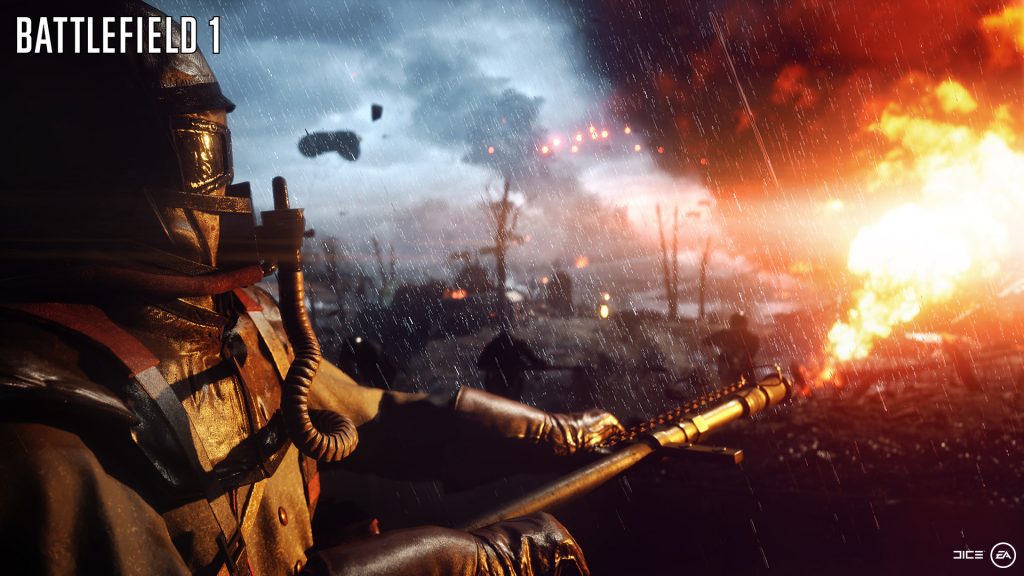 "Operations mode is a fantastic new addition to the game’s multiplayer offerings. It’s an awesome hybrid of the Conquest and Rush mode bringing in battles that could last for an hour."

Conquest Mode returns in Battlefield 1 and it’s what you expect it to be. Large scale multiplayer battles across a massive map wherein players challenge each other for capture points…Conquest Mode is fun as it ever was. Team Deathmatch pits your team against an enemy team and your aim is to wipe them out. During certain time intervals, an elite class weapon will be dropped on the map and the first to get to it will have the upper hand in inflicting more damage on the opposing team.

Adding some humor and amusing entertainment to the multiplayer is the War Pigeons mode. The pigeon is kept in a certain location within the map and once you locate it you will be able to call off artillery strikes on your enemies. Unlike the modes I described above there is no sense of strategy involved…this mode is purely mad fun.

Rush mode seems to have been toned down compared to Operations. Unlike the latter, this mode feels rather small scale with closely placed objectives. Furthermore, a limit of 24 players makes the map feel empty. The Rush mode feels rather unbalanced and it seems it wasn’t on DICE’s priority list.

One of the highlights of Battlefield 1 is its map design. From the shadowy depths of the Argonne forest which will give you plenty of opportunity for close quarters combat to the Ballroom Blitz set alongside the Mesuse river, the maps feel like they have come a long way since the good old days. 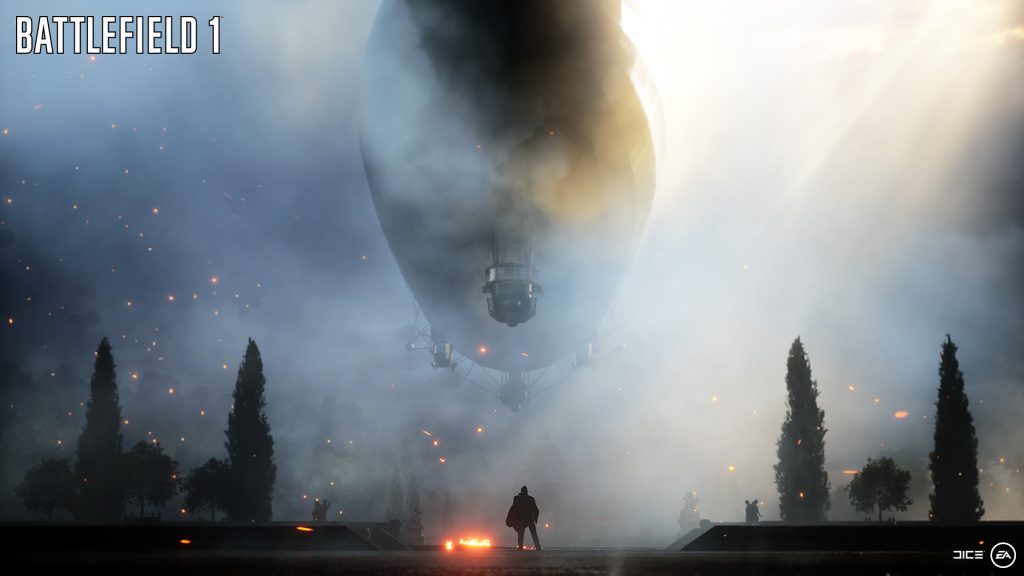 "The series’ impressive gameplay is still intact and the multiplayer component is as robust as ever which will ensure that fans are invested in the game for a good while."

Battlefield 1 employs a progression system that strives to award you for every action you have performed. Playing more and more of the multiplayer will unlock level upgrade rewards which will help you to grow an arsenal of awesome weaponry. Just don’t expect futuristic or sci-fi weapons given the game’s settings.

So in the end, Battlefield 1 very much feels like a Battlefield game which has improved upon several aspects compared to its predecessors. It will surely make existing fans happy however we are not really sure whether it will attract new comers. We really hoped that DICE would have exploited the full potential of the single player campaign, bring in playable French and Russian armies and make the Rush mode much more appealing. However the series’ impressive gameplay is still intact and the multiplayer component is as robust as ever which will ensure that fans are invested in the game for a good while.

Rush mode feels a bit unbalanced, campaign mode had potential but DICE did not managed to fully exploit it, enemy AI could be dumb at times.

Battlefield 1 manages to break up the monotony of current first person shooter trends by offering a fresh setting. Despite some issues, it offers one of the better Battlefield campaigns and a robust multiplayer component that will keep you hooked up for quite a while.

A copy of this game was provided by developer/publisher for review purposes. Click here to know more about our Reviews Policy.
Tagged With: battlefield 1, DICE, EA, pc, ps4, Xbox One