Battlefield 1: They Shall Not Pass DLC Review – War is Bigger Than Ever Before

They Shall Not Pass is heavy on content and features at least one truly memorable map.

Posted By Shubhankar Parijat | On 27th, Mar. 2017 Under Article, Reviews

Battlefield 1 came out to enormous fanfare and great reception- critical and commercial- late last year, and while the game’s excellent, tactical, large-scale multiplayer battles have kept players glued in the months that have gone by since, demands for more content other than what the base game already offers have grown with each passing day. Battlefield 1 gets its first paid DLC in the form of They Shall Not Pass, and there is no doubt that it is definitely worth the wait, especially for those who are by now fully invested in the deliberate and thrilling battles of the base game.

With They Shall Not Pass, DICE delivers exactly what fans of the base game wanted- more of everything that makes Battlefield 1 great. More, and more, and then some more. They Shall Not Pass is not light on content, featuring four new maps, all of which are excellently designed (with at least one of them being good enough to rank amongst the best in the entire game, if not the series), new vehicles (including the excellent new Behemoth tank), new weapons, two new Operations and an entertaining new multiplayer mode.

The USP of the They Shall Not Pass DLC is the addition and introduction of the French and all their might in Battlefield 1’s setting of World War 1. It was a bit of a surprise to see the French not playing a role in the base game itself, given their vital role in the history of the war itself, and as such, it’s great to see them finally being given the limelight. And the French theme pervades throughout all (or most) of the content on offer in this DLC, from the weapons to the locales.

"The French theme pervades throughout all (or most) of the content on offer in this DLC, from the weapons to the locales. "

And what wondrous locales they are. Battlefield 1 is a monster of a game when it comes to visuals, so it’s no surprise that all the maps in They Shall Not Pass look drop-dead gorgeous. What’s also nice to see is that the excellent quality of map design is maintained in this DLC. There are four new maps for players to play on. Verdun Hills is set on a large hilly area surrounded by what is essentially a ring of fire, providing players with a sprawling landscape full of trenches (for the trench warfare fanatics) to fight in in the constant backdrop of a very visual reminder that there is no hell greater than war. Conversely, Rupture is set in a beautiful, lush landscape, complete with fields of poppy, a river and large destructible buildings. Soissons is a map that is, out of all four, the least creative (we’ll talk about this in a bit), but still provides some pretty intense vehicular combat sections. Finally, Fort de Vaux is a map that is very un-Battlefield like in nature, with more focus on tight corridors and close quarters combat in a sprawling fort than Battlefield 1 players may be used to.

Verdun Hills is the best map in the DLC, since not only is it visually striking, but it also provide players with the opportunity to engage in some thrilling, intense trench combat across a sprawling, immaculately designed map. As far as Fort de Vaux is concerned, you have to give credit to DICE for going in somewhat of a different direction than what their base game was built around, with the map providing plenty of opportunities for indoors, one-on-one combat. And while it does work rather well most of the times, the feeling that the map is built around mechanics and a play style that doesn’t necessarily complement the game itself all that well can never be shaken off, not to mention the fact that potential overuse of frag grenades by players makes battles on the map unbalanced, and at times, more than just mildly annoying.

Soissons and Rupture, on the other hand, stick close to what the game is good at, providing sprawling, open landscapes that are almost entirely destructible and can easily be the backdrop of some great and memorable large-scale battles. And while that mostly works in their favour, it can be a disadvantage too- the foundations they’re built on are obviously solid and offer very little to complain about, but the fact that they do not try enough new things is a bit of a disappointment. 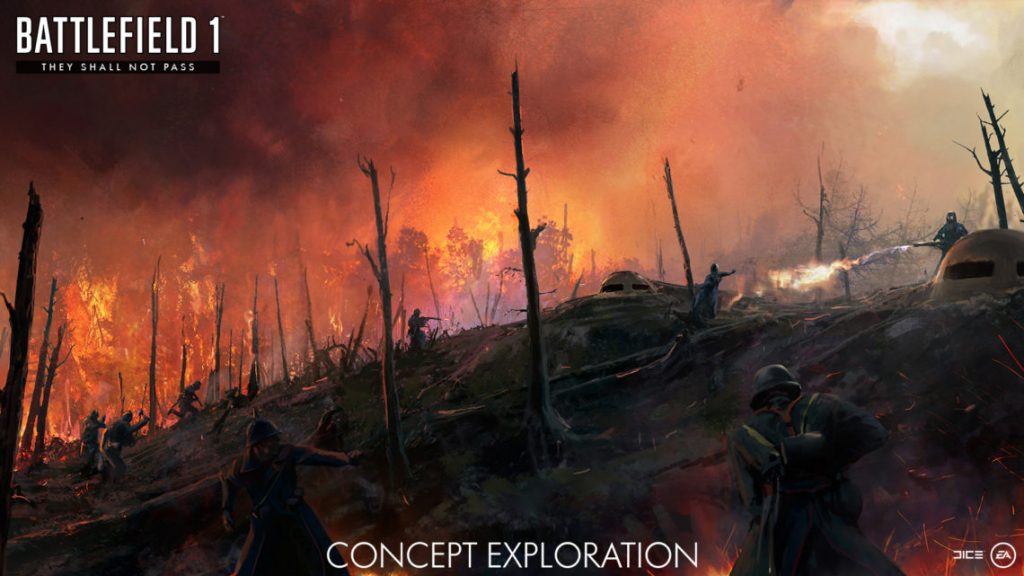 "Verdun Hills is the best map in the DLC, since not only is it visually striking, but it also provide players with the opportunity to engage in some thrilling, intense trench combat across a sprawling, immaculately designed map."

However, the opportunity to drive around in the new vehicle on offer, namely the Char 2C – or the Behemoth – more than makes up for the lack of innovation. The Char 2C especially is an absolute blast to control, and in the hands of a properly skilled player, it can alter the course of entire battles. The new weapons included in They Shall Not Pass, just like the vehicles, are appropriately authentic in terms of how they feel and handle and pack as much of a punch they should, making for valuable additions to the Battlefield 1 arsenal.

These four new maps also serve as the backdrop for two new Operations, with The Devil’s Anvil being set on Verdun Heights and Fort de Vaux with a focus on infantry combat, while Beyond the Marne is set on Rupture and Soissons and provides a vehicle-heavy structure. These two new Operations allow DICE to show their cinematic chops once again, and both offer some very well paced action and a great deal of neatly presented World War 1 lore for players to sink their teeth into. Showing the gritty realities and gruesome individual stories of WW1 through the Operations was one of the best things DICE did in Battlefield 1, and it is good to see them continuing to do the same with its very first DLC.

Finally, They Shall Not Pass also adds a brand new multiplayer mode in the form of Frontlines to the base game. Frontlines is a sort of a cross between Conquest and Rush from Battlefield 1, and sees teams in a total of 32 players going at it against each other in a race to complete certain objectives, such as capturing flags and then destroying telegraphs. If two properly matched teams play against each other, Frontlines can be potentially amazing, offering some great back and forth tug-of-war battles across the new maps that can stretch on for significantly long durations. It’s probably not going to become the most played multiplayer mode in Battlefield 1 or anything like, especially considering the fact that it will remain exclusive to those who have the They Shall Not Pass DLC, but it’s still an entertaining new mode that players will probably get plenty of mileage out of. 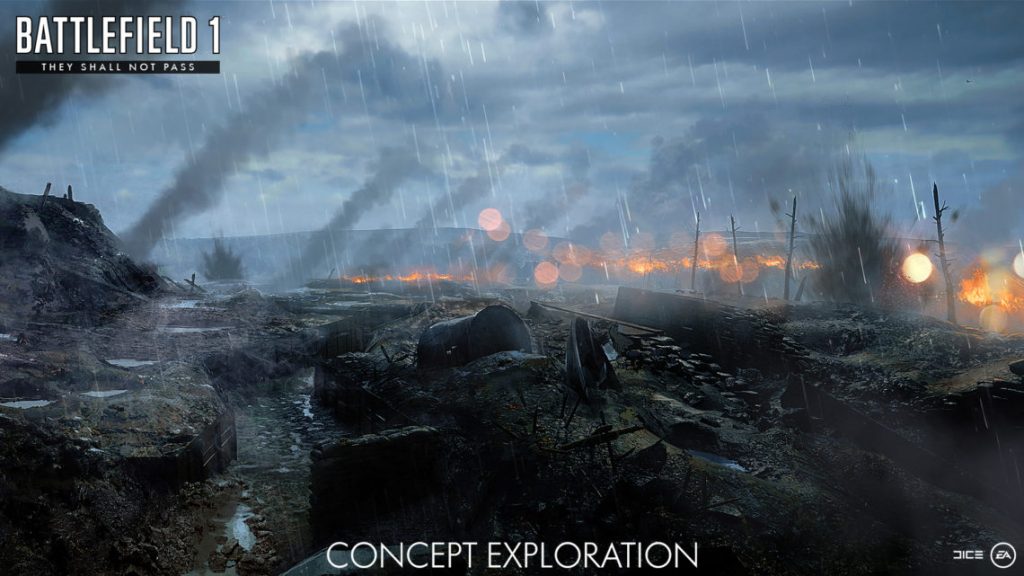 "Showing the gritty realities and gruesome individual stories of WW1 through the Operations was one of the best things DICE did in Battlefield 1, and it is good to see them continuing to do the same with its very first DLC. "

They Shall Not Pass is appropriately heavy on content, and features some very well designed maps, with Verdun Hills being the highlight of the four. In addition to that, it features the excellent new Behemoth tank, two new Operations that are more than just enjoyable, and a great new multiplayer mode. All in all, it’s well worth the price of admission, and if you’re a fan of Battlefield 1, trust us, you won’t be disappointed.

Solid map design; Verdun Hills is one of the best maps in the entire game; Frontlines is a great new mode; Two new entertaining Operations; The Behemoth tank is an excellent addition to the vehicles lineup.

Battlefield 1's They Shall Not Pass DLC keeps up the high standards set by the base game by offering a wealth of excellently designed content.

A copy of this game was provided by developer/publisher for review purposes. Click here to know more about our Reviews Policy.
Tagged With: battlefield 1, Battlefield 1: They Shall Not Pass DLC, DICE, EA, pc, ps4, Xbox One