BattleTech is a game that is being made by the creator of the MechWarrior franchise and the developers of the Shadowrun games. This is a game that promises to be huge both in terms of content and scope. Along with deep tactical gameplay, the game also features a complex narrative that draws on real-world history.

Jordan Weisman, CEO of Harebrained Schemes and creator of BattleTech and the MechWarrior franchise, answered our questions about the game’s development.

"As it turns out, our fans had even bigger visions for what the game could become. It was their funding and constant positive energy that really helped make BATTLETECH the game it became."

What made you decide to bring BattleTech back to the PC? Is this something you’ve been planning for a while now?

For many years we have wanted to bring the MechWarrior franchise back to its roots as a squad level turn-based tactical game, but we didn’t have the opportunity to until we were able to work out the licensing rights with Microsoft.

What made you decide that Kickstarter was the way to go with this one?

Well, one of the most frequent questions we received from our Kickstarter Backers while developing the Shadowrun Returns series was “When are you guys gonna make a BattleTech game???” So when our vision for BATTLETECH proved larger than our available budget, the decision to return to Kickstarter was easy. As it turns out, our fans had even bigger visions for what the game could become. It was their funding and constant positive energy that really helped make BATTLETECH the game it became.

Will the game also make its way onto other platforms such as the PS4, Switch and Xbox One?

At the moment, we are all heads down just launching on PC and Mac, and with Linux being added post-launch. So we don’t have any console plans at this time.

One of the stretch goals you hit means we’ll be seeing some multiplayer action in the game as well. What can we expect from this aspect of the game?

Indeed, the game features 1v1 multiplayer skirmishes – players can challenge their friends or find opponents to square off against in our public lobbies. The host selects the parameters of the battle including the map, the weather conditions, the lance (or squad) size, and whether or not the players can use customized `Mechs or are restricted to stock `Mech designs. Our Kickstarter Backers who had access to our Backer Beta had a lot of fun playing multiplayer matches and told us they were filled with tension and surprises.

For a game about warring ‘Mechs, there also seems to be a deep and complex story in this game. How did you approach the process of writing the story, and was it a top priority when making this game?

BATTLETECH isn’t about warring ‘Mechs. It’s about people who use ‘Mechs to make war. Story is always a top priority for us, and it was for BATTLETECH as well. Our Lead Writer, Andrew McIntosh actually created the first draft of each story mission himself to insure that the story he had in his head could successfully translate to the battlefield. Once that was proven, the challenge was how to weave the story into the open-ended mercenary campaign in which the player has a great deal of agency on where to go, whom to work for, and even what missions to complete or retreat from if the cost of completing them is too great. 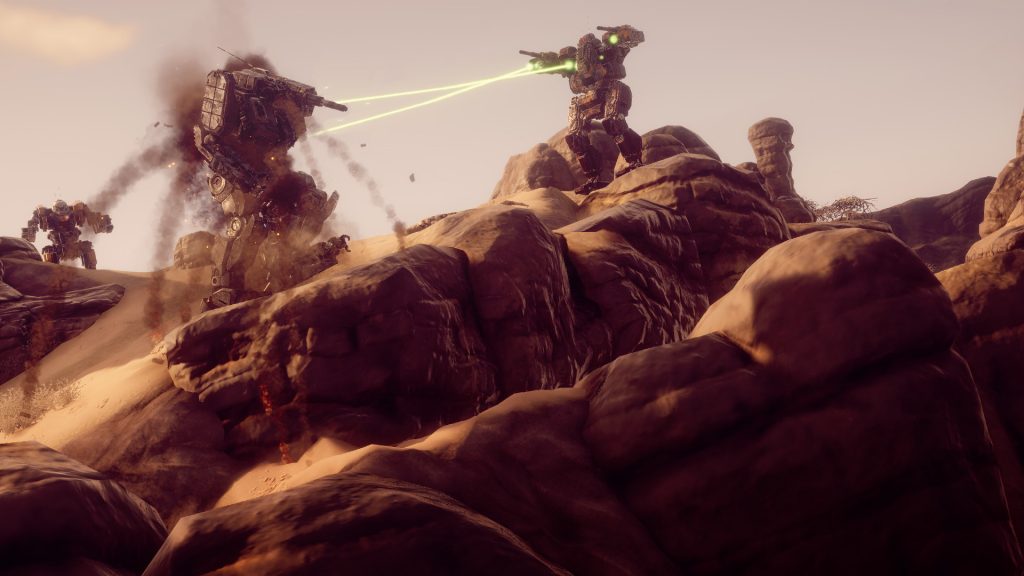 "Each planet you navigate to is “tagged” with a series of attributes that determine the enemies and contracts you can expect, the types of maps you’ll encounter, the sorts of MechWarriors you can hire, and the technology you can find in stores."

What would you list as some of the inspirations behind this title?

Wow, there are a lot of them. First and foremost of course is the lore and history of BattleTech itself. There’s over 30 years of source material including hundreds of novels, a score of  tabletop games and supplements, about a dozen videogames. Even though it came out a decade after BattleTech, the tone and visual language of Game of Thrones was also a touchstone.

One of the really exciting parts about this game is the emergent gameplay sections that are totally unique. Could you elaborate about how this affects the game?

Unlike our Shadowrun CRPGs, BATTLETECH gives the player a great deal more agency in charting the course of their mercenary organization. The player can decide where to travel, which factions to work for and which contracts to accept. Each planet you navigate to is “tagged” with a series of attributes that determine the enemies and contracts you can expect, the types of maps you’ll encounter, the sorts of MechWarriors you can hire, and the technology you can find in stores. This means that there is an almost limitless number of ways that a player’s campaign can go. The spine of the game is a campaign story implemented as a series of contracts from a client who you have a history with and something of an emotional connection to.

BattleTech seems to be a much bigger game than the Shadowrun games you’ve worked on. Was the development process significantly different because of this?

OMG YES! It is a much bigger and more complex game than all three Shadowrun titles combined! The development was different in several ways. First the team was much larger. At peak, the team was easily twice the size of the Shadowrun Hong Kong team. This required us to organize differently and become more formal in our processes. Second, the game development period was much longer. The original Shadowrun Returns was a 12 month development and BATTLETECH was almost 3 years. That’s a long row to hoe. And third, the scope is huge by previous standards!! Mike, our Game Director, spent the weekend speeding through a minimum-path playthrough of the campaign, and even for him – knowing all the ins and outs of the game – it took over 30 hours. Yeah, it was different.

You’ve stated time and again that the game’s setting is inspired by real-world history. What made you decide to go this route with the setting?

I find that the inventiveness of millions of people over thousands of years is pretty hard to beat as an author. So when working on a game setting, I start by blocking out the broad strokes of the geopolitical situation needed for the metagame to work, and then look for historical parallels to draw from. I think that basing fiction on history results in the fiction feeling more real because the motivations and actions of people and factions have an authenticity to them.

While you’re focusing on a narrative mainly on the mercenaries, will we also get to see how the politics of the Noble Houses work? Or will these effects be felt in an indirect way in the Game?

This game is set in the Rimward Periphery and focused primarily on the factions local to that region of space, but the Great Noble Houses’ presence are definitely felt. The Aurigan Reach is nestled between two superpowers, the Magistracy of Canopus and the Taurian Concordat, and the civil war that develops there is significantly impacted by their proximity. It’s also impacted by those superpowers’ alliances or antipathy with the noble houses of the Inner Sphere. As the reputation of player’s mercenary outfit grows, they can take missions in House Davion, House Liao and House Marik space, but their machinations are not the focus of this initial game. 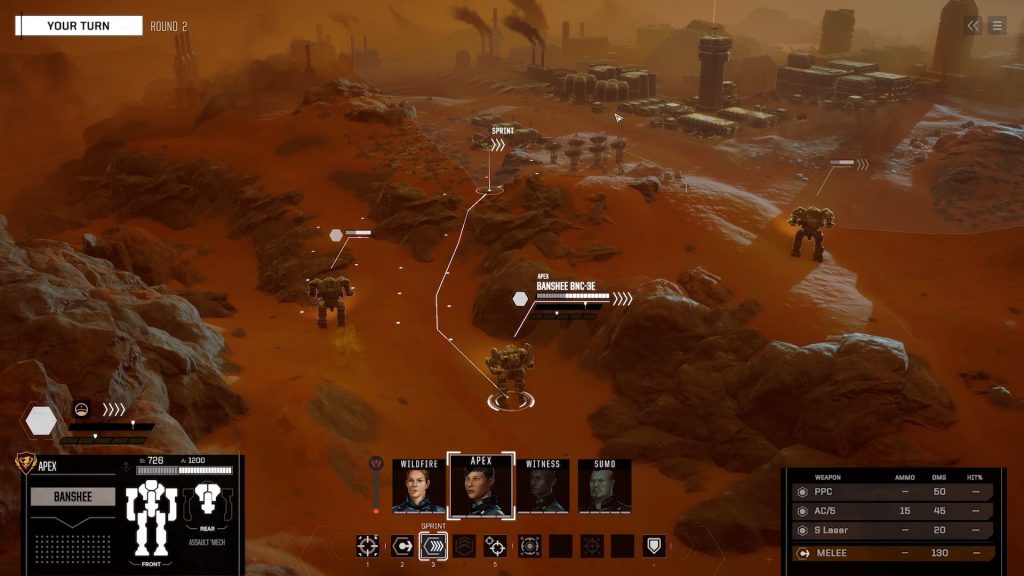 "Yes, we knew from the get-go that this was going to be a translation of classic BattleTech, not a port of the original tabletop game"

One of your main goals with this game was to translate the feeling of the tabletop game to the PC. Were there any significant challenges you faced in the process?

Yes, we knew from the get-go that this was going to be a translation of classic BattleTech, not a port of the original tabletop game. As we said in our Kickstarter, “Our goal is to craft a combat system for BATTLETECH that’s the perfect blend of tactical depth, speed of play, and meaningful unit customization. As we did with our Shadowrun games, we intend to capture the *spirit* of the original tabletop rules, while designing the best PC game we can.”

Regarding challenges, let’s start with the obvious – tabletop games have the enormous benefit of in-person social interaction. Being around the table with your friends is entertaining all by itself and taking more time to resolve game results is not necessarily a negative. For instance, the simultaneous fire initiative system used in the tabletop game did not translate well because so much happened all at once that it was impossible for the player to track it all. When you are at a table rolling dice with your friends you can track each weapon attack while eating pizza, but when dozens of weapons fire all at the same time with cool realtime animations, it’s impossible to absorb and player’s found themselves wanting a log of what happened – which is not stimulating gameplay. 🙂

Is there anything more you’d like our players to know about the game?

Only our thanks to all the BattleTech and MechWarrior fans out there who helped us make this game a reality.  We’re hoping that the launch of BATTLETECH will bring even more fans into the fold, because we would love to keep adding to this game!