The greatest action game of all time.

Alongside Ninja Gaiden Black, the original Bayonetta is often considered to be one of the greatest action games of all time. Its sequel, therefore, has a lot to live up to, and it also needs to justify its very existence, which has been called into question by legions of fanboys ever since it was announced as a Wii U exclusive.

The amazing thing is, Bayonetta 2 succeeds on every single one of these levels- it not only lives up to the original Bayonetta or Ninja Gaiden Black, it far outclasses them, and in the process, it delivers what is without a doubt the greatest action game of all time, and a pinnacle of game design. Once you play Bayonetta 2 and realize that it escalates with nearly every single level, throwing more and more insane and over the top things at you to tackle, while also somehow managing to settle you into a symbiotic rhythm with all of its systems, you understand- it just does not get any better than this.

Bayonetta 2 has a story to tell- it takes place just a little while after the end of the first game, and sees an attack by the demonic forces of the underworld. Bayonetta and Jeanne successfully manage to ward the attack off, but in the process, Jeanne is captured and taken to the underworld herself, leaving it up to Bayonetta to initiate her rescue. Honestly, the story that Bayonetta 2 has to tell is forgettable and throwaway at best. It’s not a very good story, although the writing, at least, is sharp, and if the game made it a point to linger on it, it would heavily drag the experience down. 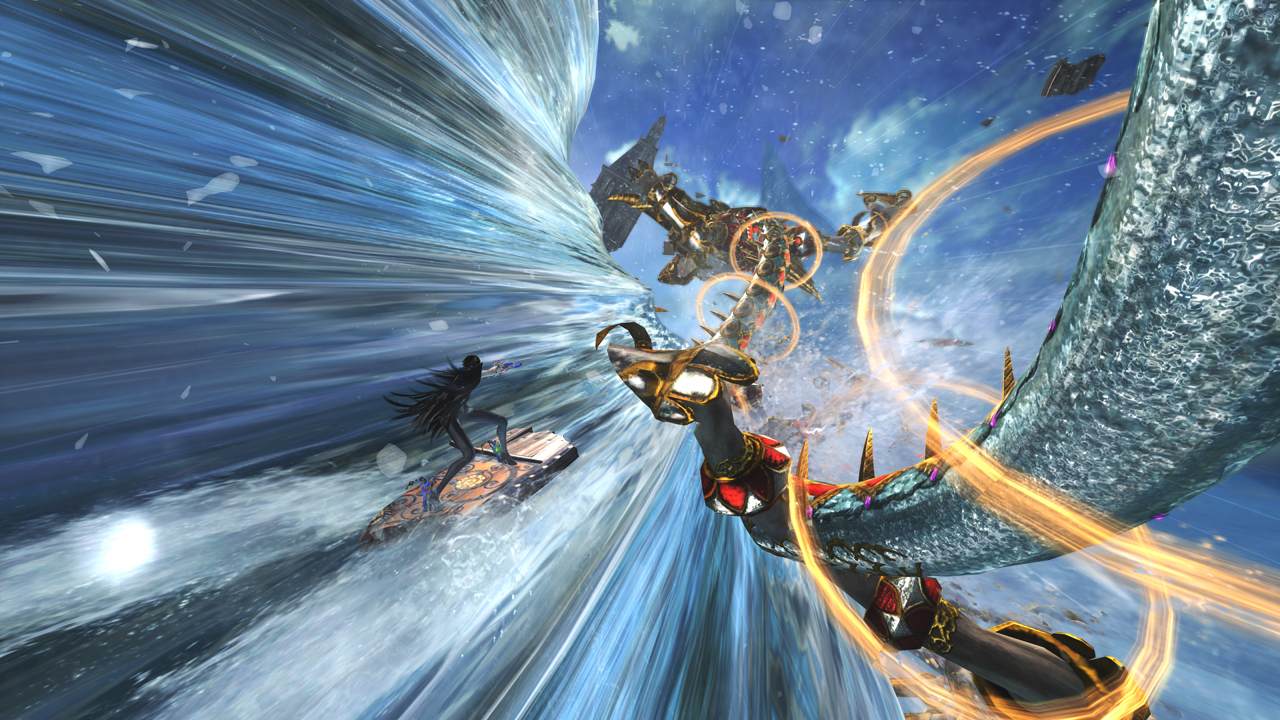 "And that can probably be used to describe the entire game in a nutshell- just when you think something can't be bettered, Bayonetta 2 comes along and does it better, raising the standard to such a ridiculous degree that honestly, it is unlikely that any game in the genre will be able to meet it in the future."

Thankfully, Bayonetta 2 wisely chooses to avoid focusing on its story too much. Instead, it emphasizes its fluid and satisfying gameplay, alongside its almost maniacal obsession on spectacle. In Bayonetta 2, you see, things are never crazy enough. The game starts with building sized monsters attacking a city, and you navigating the city and dispatching of these monsters on these monsters, and it never lets up after that. Every single level ups the ante, every single level somehow escalates the stakes and the insanity of everything from what came before it. Just when you think that Platinum Games couldn’t possibly top what has just happened, they come out and do it.

And that can probably be used to describe the entire game in a nutshell- just when you think something can’t be bettered, Bayonetta 2 comes along and does it better, raising the standard to such a ridiculous degree that honestly, it is unlikely that any game in the genre will be able to meet it in the future. And as much as this has to do with the spectacle, most of this comes down to what is the meat of an action game, and what Bayonetta 2 does so exceptionally well- the actual gameplay and combat.

Platinum Games have wisely decided to not mess with a good thing here, as Bayonetta 2 largely gives us more of the same that made the original Bayonetta so exceptional, just amped up to higher intensities, although there is an all new ‘Umbran Climax,’ that allows Bayonetta to unleash a devastating attack once her meter is filled. In essence, it is easy to mistake the two button combat of Bayonetta as something shallow, but that would be doing it a great disservice. 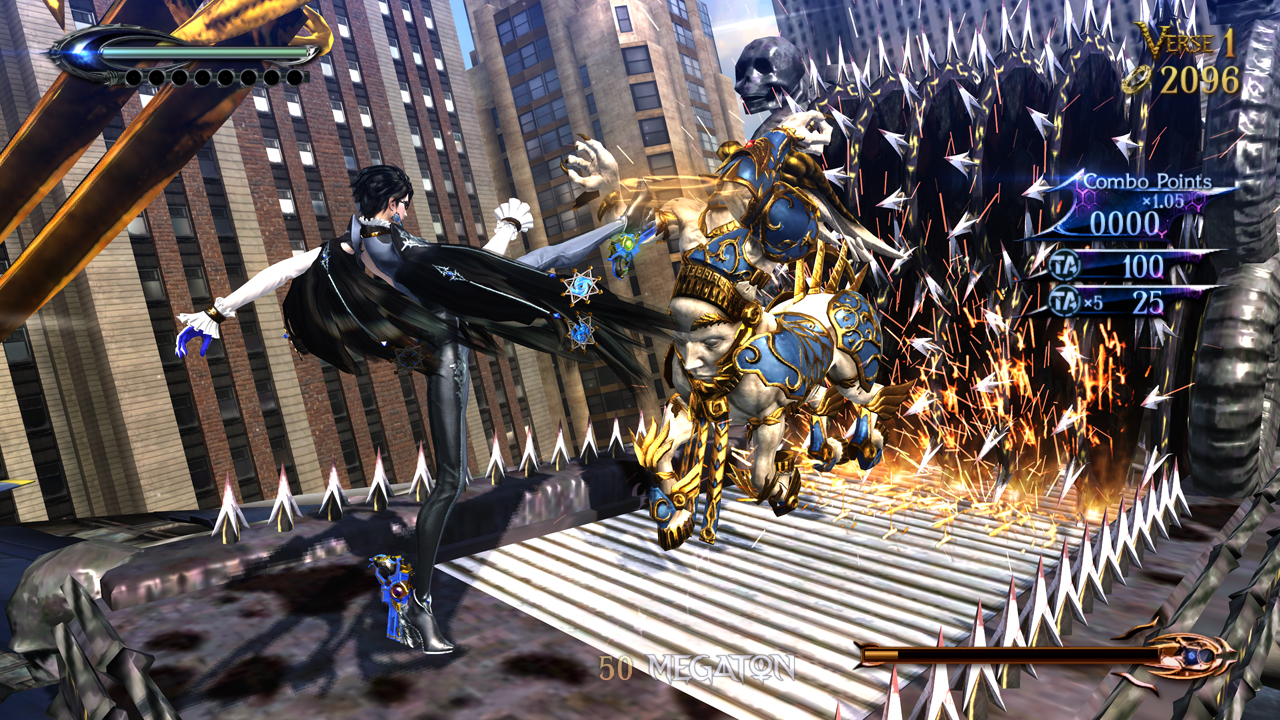 "Bayonetta 2 works so much better than any action game that has come before it because the chaos that surrounds you truly works in conjunction with the chaos that you wreak- one does not exist in isolation without the other."

Not only can the two kinds of melee attacks that this provides be mixed up and strung together in very interesting combos, but the game has more wrinkles thrown into the mix- ranged weapons, which can be juggled at will in the middle of a battle, ‘torture’ attacks, which are glorious, hyper-violent finisher moves, you can, of course, mix and match your weapons in the middle of a battle and string together even more attacks and combos, plus dodging, which plays such a great role in Bayonetta 2 as it did in the first game, and activates Witch Time, returns.

Dodging is actually one of the most central mechanics of Bayonetta 2 (just as it was with the first game), and it is executed in a manner that is altogether unique. The game never prompts you to dodge- you need to observe you enemies and their movements, and decide when an attack is incoming, and dodge it just right. Should you manage to do that successfully, you enter Witch Time, which is like a Bayonetta version of Bullet Time, where time slows down for a good while for everyone but you, allowing you to unleash your attacks and combos on the enemy in no time in ‘real’ time, and string together unrealistically long combos that would otherwise be impossible.

There is something satisfying about pulling off a successful dodge, and following it with a swift dispatch of the enemy in Witch Time, and Bayonetta 2 knows this, and it makes no bones about how central it makes the entire thing to its experience.

Bayonetta’s reliance on dodging and Witch Time, in conjunction with its incredible combos and how spectacular and satisfying they look on screen as Bayonetta pulls them off, plus, of course, the spectacle of what is going on around you that provides a canvas for your insane attacks. Bayonetta 2 works so much better than any action game that has come before it because the chaos that surrounds you truly works in conjunction with the chaos that you wreak- one does not exist in isolation without the other. The environments are a canvas for your combos and brutality, sure, but your brutality itself wouldn’t be half as impressive without the excellent levels and backdrops to give it all some context. 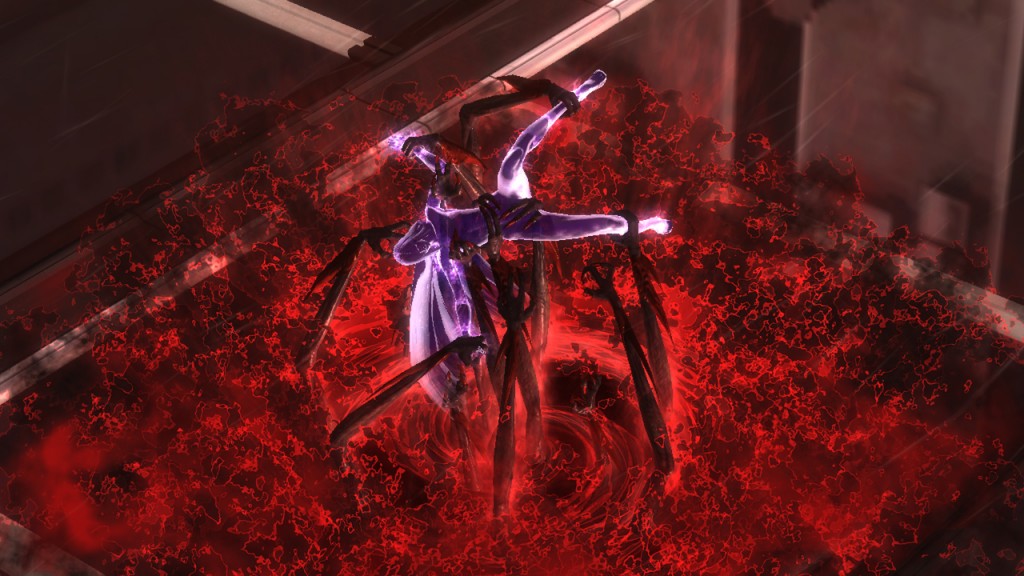 "You'll be sold on this, what is, in no uncertain terms, the greatest action game ever made. And in that moment, you won't be resentful that it is a Wii U exclusive, but you'll simply be glad that it exists."

All of this takes place over a 15 chapter romp that should last most players about as many hours. Players on lower difficulties, who are more casual players of the genre, will probably just want to play through the game for completion’s sake, and be done with it in 15 hours. For players on higher difficulties who manage to complete the game in that many hours, however, the real game will only begin after they have completed the story once. That’s because they will want to go back, and try to get the best medals on all the levels, maximizing the carnage while minimizing the damage.

But should you want even more from the package than what Bayonetta 2 already provides you with, it’s there. There’s a new Tag Climax mode, which is essentially a co-op multiplayer arena mode, where you take on waves of enemies, while still trying to achieve a higher score than your partner. You can play Tag Climax online, but also single player by populating it with a CPU bot, which is a welcome addition, considering that Bayonetta 2’s online lobbies are not likely to be very populated for a very long time.

Apart from that, there’s a lot more for you to do- a Challenge Mode returns, just like it was in the first game, alongside multiple difficulty levels for you to unlock and try, characters, and integration with Miiverse and Stamps, which should give you incentive to spend even more time with the game. That, plus of course there is the elephant in the room, which gives us the first Bayonetta game, enhanced (and far and away the best version of it so far yet), and given to us for free.

Bayonetta 2 justifies its entry price, and there’s tons here for you to do. Of course, there will be the more casual players who will complete the game, and not be tempted to go back to the game for higher scores, or to Tag Climax without a human player, so there is potentially a shortage of content once you are done with the main game for at least some of the people who buy Bayonetta 2. But for others, Bayonetta 2 presents us with quality and quantity.

And what quality it is- just a few minutes into Bayonetta 2, you’ll be sold. You’ll be sold on this, what is, in no uncertain terms, the greatest action game ever made. And in that moment, you won’t be resentful that it is a Wii U exclusive, but you’ll simply be glad that it exists.

Amazing, pitch polished combat that is satisfying, challenging, and yet accessible; sense of style and frenetic pace; the spectacle of each level, that works so well in conjunction with your brutality on screen; dripping with content.

A poor, throwaway story; Tag Climax without human players is just not the same.

Final Verdict:
EDITOR’S CHOICE
Bayonetta 2 is perhaps the single greatest reason to own a Wii U.
A copy of this game was provided by Developer/Publisher/Distributor/PR Agency for review purposes. Click here to know more about our Reviews Policy.