It’s retailer leaks galore today- hot on the heels of the leaks regarding a potential Shenmue 1 & 2 pack for the PS4 and Xbox One, it sounds like there is another- and this one is likely to make many modern gamers very happy indeed.

Multiple retailers – UK website Alza.co.uk,  Film-Game.cz, and Estelacnesie to name three – seem to have had listings of a Bayonetta & Vanquish Pack go up, complete with boxart and everything, for the Xbox One and PS4 (this is rather conclusive, unless some bored employee decided to waste valuable time on the clock making phony box arts).

This means that Platinum’s most celebrated games will be available on Xbox and PlayStation (it also means PlayStation may finally get a good playing version of Bayonetta). Of course, Bayonetta 2 is not included here, but it is very unlikely that that game will ever be on a non-Nintendo system to begin with.

Hopefully, this double pack is officially announced soon- until then, we wait with bated breath. 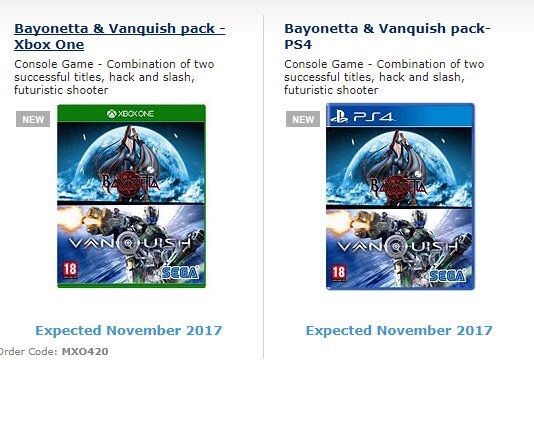