Ben 10 Alien Force: Vilgax Attacks is a platformer developed by 1st Playable and published by D3 Publishing for the NDS. The game is also available on consoles – and there are several key differences between the hardware ports – but this review focuses on the handheld version.  The plot will be familiar to fans of the series: enemy (the titular Vilgax) attacks earth with super-weapon.

Where the game departs from the cartoon, though, is that in this instance the villain is successful. Just when all seems lost, Professor Paradox reverses time and sets the hero a quest to disrupt Vilgax’s source of power before he can threaten Earth. Certainly this game is a serious contender for the “Most Blatant incident of ‘Deus ex Machina’” Award. 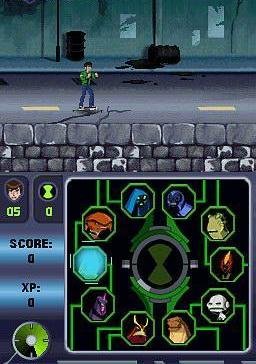 On some worlds, Ben Tennyson is worshipped for his fashion sense.

The plot is the same across all the ports of the game; however the handheld approach takes a platforming approach. This is presumably due to hardware limitations making it difficult to emulate the versions on the more powerful consoles. Each alter-ego’s powers make you immune to environment hazards – for example Swampfire is able to walk through flame jets.

Moreover the DS version doesn’t feature an energy gauge mechanic, so elemental powers have infinite use. The game tries to compensate for this by throwing larger groups of enemies at you, but all this does is leave you with more experience orbs with which to upgrade your powers. Another feature which lowers the difficulty on the DS version is that space sections also grant XP. This is not the case on the console versions. 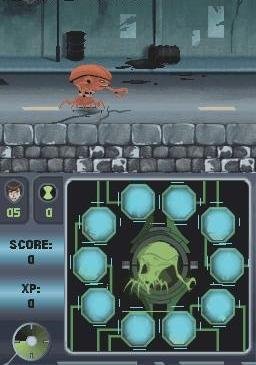 The DS version has additional issues too. There is a complete lack of tutorial for the Omnitrix collectables scattered throughout the levels (Red = health, Blue = temporary invincibility, and Green = I still don’t know). There is no replay value, unless you like beating games on every difficulty setting. If you are 10 and already have this mindset, move to Russia and take up chess instead. It’ll get you more girls.

The game also has balancing issues, as I found myself reverting to only a couple of forms for movement/combat when not using specific creatures to overcome specific obstacles. This is made worse by the fact that the DS-exclusive form (Upchuck) is completely useless in combat. Occasionally, some stages are cut-off by the camera, leaving you only half of an area to fight on. There is no voice-acting, and the music is forgettable. 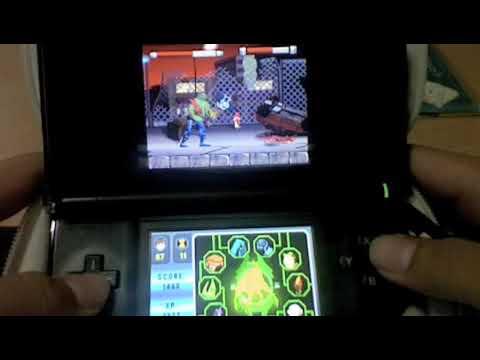 It was my thumbs or the box-art. Seriously, there are no other images out there.

However, visual presentation is where the game starts to shine. Character animations are always smooth regardless of the form you are using and levels are crisply rendered. The use of the touch-screen to enable instant form-switching is inspired, and really makes the game accessible whilst taking advantage of the NDS hardware. The use of a top-down camera for the ship sections means you can see attacks coming and manoeuvre accordingly.

While there are undoubtedly problems, none of them are particularly game-breaking. The pros and cons generally cancel out, and since you should be buying this game for the target audience (8-14) they probably won’t notice. Vilgax Attacks is a solid purchase for younger gamers.

Final Verdict:
FAIR
One for fans of the show only - If you are a fan over the age of 12, get a job and move the hell out of your Mom’s basement.
A copy of this game was provided by Developer/Publisher/Distributor/PR Agency for review purposes. Click here to know more about our Reviews Policy.