Players will need to combine all the skills of chairman, manager, player and fan as the title blends the best in football management strategy and animated trivia games. The exciting new title is highly competitive and will challenge all levels of football fans knowledge and strategic skills as they battle in one-on-one leagues to meet the games main objectives – to win titles and silverware, and attract more fans to their club.

Players succeed by answering a selection of both constantly updated and historic football questions from English football’s top four tiers keeping the game concurrent with the real life action.  Players can win possession and tackle the opposition by responding quicker to questions, requiring a decent level of football knowledge and quick thinking.

The reward of winning matches is gaining fans and in-game currency. This can be strategically used to buy players, upgrade stadiums and even install hot dog vans to attract more fans and progress to the leagues higher echelons.

“With a fun, entertaining and humorous style, ‘Big Match Striker’ is a new kind of game and we think it will appeal to football fans of all ages and persuasions” commented Supermassive’s Online Publishing Director Geraint Bungay. “The only requirements are a PC, an internet connection and a love of football. Our vision is to become the online destination of choice for football fans to contest, celebrate and share their knowledge and passion for the beautiful game.” 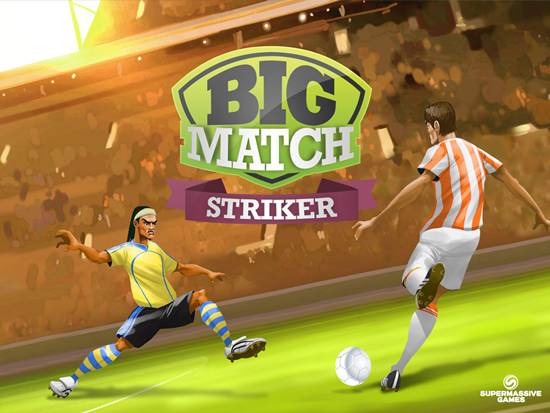 Player interaction will be a key aspect of the game experience. The games main entry point and community will be hosted online and will contain regular news and features from the game’s editorial team, weekly podcasts with lively chat and debate on the game’s latest talking points and discussion forums for players to interact with each other. The initial game download and subsequent updates will be available from the game website.

Smackers: The in-game currency which players accumulate as they win matches. The currency is a key part of developing and growing a club, as they can be spent on various assets such as larger stadiums, improved infrastructure, stamina, and new players.

The Community: There will be a website acting as the game’s entry point and the home of the game’s community, buzzing with players discussing all things football. As well as forums and chat rooms, there will be regular news and features stories from the games editorial team.

Player Stamina: As in the real life game, stamina on the pitch can only last so long. There are two main ways to manage stamina levels; topping up with Big Match Bucks, and staggering games to ensure that stamina is not used up too quickly.

Trophy Cabinet: Each player has a cabinet where they store their winnings.

Club Strategy: It’s not just a game of football knowledge, players are rewarded for effective management of all their strategic club assets. These include stadium expansion plans, revenue streams such as catering, merchandise and team playing tactics.

League Seasons: Each League season lasts three weeks in real time, creating the pressure and excitement level of any league competition whilst allowing enough time for each player to play the game as and when best suits them.

Artificial Intelligence: Whenever a player plays a match the evolving AI system stores their success and measures their playing style across all question categories, including speed and    accuracy, and mimics the player’s behaviour when an opponent plays against them allowing players to play when they wish, not when their opponent is also available.

Challenge your friends: Players can invite their friends, monitor their progress and compare performances, current league standings, and number of fans.

Quality graphics: Compared to many online free to play downloadable games the graphics and quality of the game are far superior.

Commentary: Adding to the friendly and fun challenge, the commentary is supplied by an in game commentator, adding a twist of banter and humour.