Biomutant Review – Attack of the Mutants

Too derivative for its own good.

At first glance, Biomutant looks like a game that’s not quite like anything else out there. You play as a mutated nondescript mammal in a vibrantly colorful world filled with other hostile mutated creatures. But playing Biomutant feels like quite the opposite. It’s not so much something totally unique as it is cobbled together from ideas taken from dozens of other games without doing anything particularly special or remarkably well. There are countless systems at play that spice up gameplay and keep it somewhat fresh, but if you take out the façade of the radioactive mutant world, it all too often feels like there are too many things going on that nothing is able to flourish. Biomutant’s many different ways to play give it an undoubtedly varied gameplay structure, but with no standout qualities, it begs the question of what its strengths are and, moreover, why you should play it over any of the games it takes influence from but ultimately doesn’t surpass.

Biomutant has a quick and effective hook from the outset. The world as we know it has been destroyed and taken over by leagues of mutant creatures. In the center of the world is the Tree, and at the end of each of its four major roots is a Worldeater, each of which you need to kill to save the world from complete extinction. These four Worldeaters are the overarching enemies that you have to defeat, but naturally it’s not that easy. Early on you’re also tasked with choosing an alliance to a tribe, which predates an almost literally black and white morality system. Both tribes want to reunite everyone under one roof, though one is more overtly violent than the other. Despite technically having a choice, though, the game strongly pressures you into picking the peaceful tribe, which is really only peaceful in the way that they keep saying they wish they didn’t have to kill to unite the tribes and then killing anyway. The morality system is split into light and dark, representing good and evil, but whichever way you pick doesn’t change much aside from how people react when you make decisions.

"Biomutant’s many different ways to play give it an undoubtedly varied gameplay structure, but with no standout qualities, it begs the question of what its strengths are and, moreover, why you should play it over any of the games it takes influence from but ultimately doesn’t surpass."

These are the foremost of a big chunk of the game’s systems that seem like they’re there solely because the game feels like they should be, rather than because they have any real impact on gameplay or the overall experience. The game thinks there needs to be a morality system or an aspect of player choice and branching narrative but then doesn’t do much with it. There are other tribes you encounter around the world, but at one point if you have enough light, the game literally gives you an option to forgo any requirement of defeating the remaining tribes, which is on paper a reward for the nonviolent ways but is really just shortening the amount of gameplay and making the effort put in feel almost pointless.

In a lot of ways, the game feels like its own systems are competing with each other, which shows most clearly in its conflicting tone. The story tries to cover deeper, more serious subjects, ranging from nonviolence to the inherent goodness in life, including multiple sequences where you meet the main character’s mother in flashbacks, but the rest of its presentation gives off a jarringly opposite lighthearted and carefree attitude. This is a game where a character will preach about how it’s immoral to kill anyone unless all other options are exhausted because everyone is inherently family on this planet and then immediately send you to talk to someone named Whiz Tinkertonker. Either of these tones would have been manageable alone, but together they feel more like two separate games crunched into one. It’s emphasized in the dialogue, which is spoken in a made-up language and translated almost inexplicably by a cricket voiced by David Shaw Parker. Again, this feels like it was originally a good idea, but it doesn’t add much to the experience besides a middle man.

All in all, I never felt like the story did anything with its intriguing setup. The moral choice aspect seemed like it was going somewhere but ultimately doesn’t wrap up in any critical way, nor does it have any real impact on gameplay. There seems to be a lot of good ideas on paper, but nothing ever comes of it, and I felt by the end like I didn’t know why any of this was happening or what purpose any of the major selling points provided. 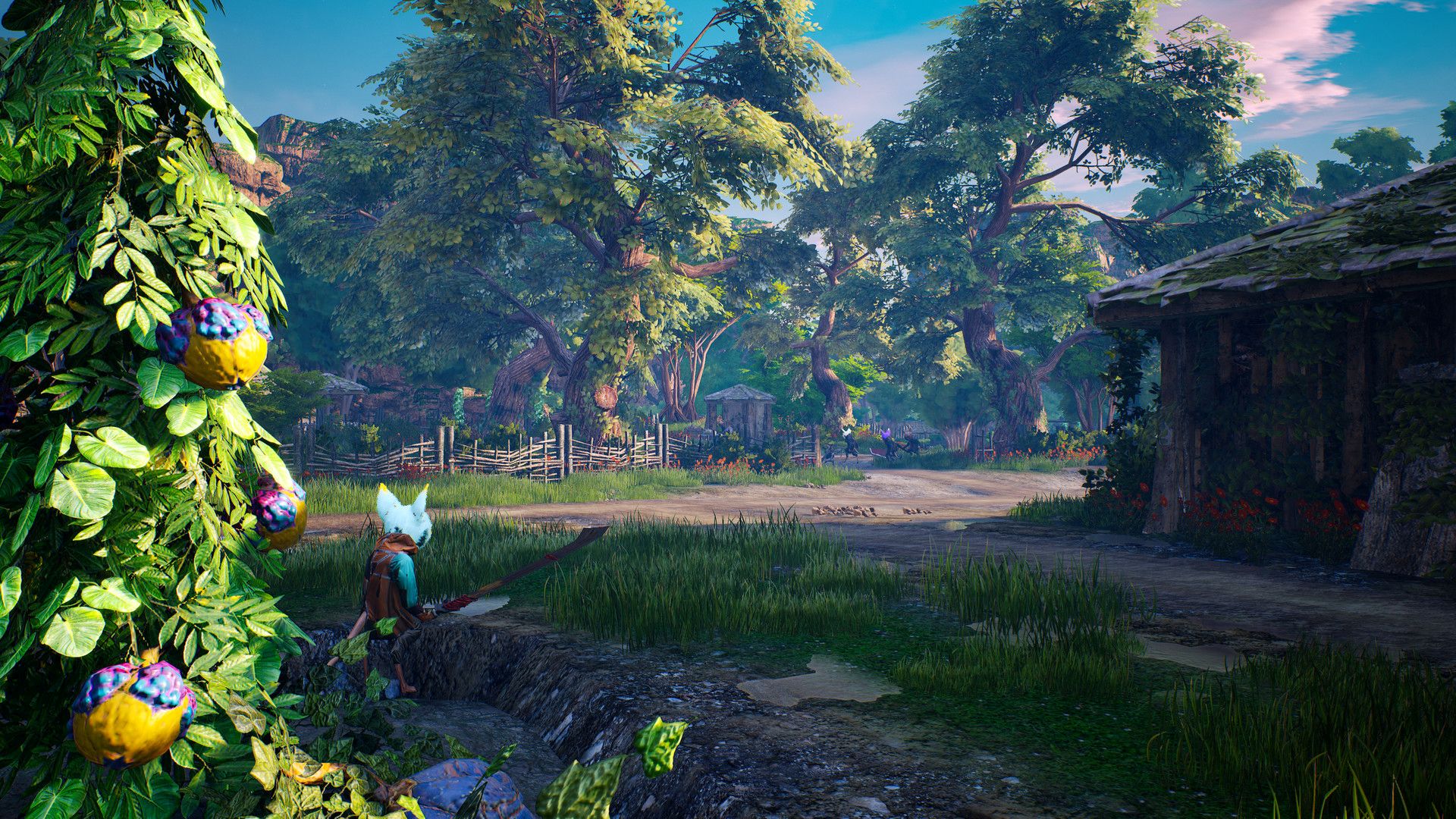 "I never felt like the story did anything with its intriguing setup. The moral choice aspect seemed like it was going somewhere but ultimately doesn’t wrap up in any critical way, nor does it have any real impact on gameplay. There seems to be a lot of good ideas on paper, but nothing ever comes of it, and I felt by the end like I didn’t know why any of this was happening or what purpose any of the major selling points provided."

A similar problem arises in Biomutant’s gameplay, which has its moments but ultimately struggles from having too many systems for any single thing to shine. At its core, it balances close-ranged and long-ranged combat and allows you to play it either as a shooter or as a beat-em-up or somewhere in between. There are a limited number of weapons to find around the world, and while you can switch between them at will, odds are you’ll pick one gun and one melee weapon and stick with them for the duration. There are dozens of combos to unlock that allow you to pull off slick moves and deal stronger damage, and this is one area where having so many different approaches serves the experience well. While some enemies can feel a little spongey, I always felt like I was prepared to fight whatever came my way however I wanted to, and despite my tendency to button mash, I got used to utilizing parries and combos.

The boss fights, especially the four Worldeaters, are easily the highlights of gameplay, as they bring a massive scale to the same sorts of gameplay. It feels like the game was trying to go for a Dark Souls-esque boss structure, as each has multiple stages with new moves every time, but I never took more than a couple tries to emerge victorious. What I really liked about these bosses is how they feel like the culmination of your stage of gameplay. There are so many systems at play, but each boss requires one or two different ones to kill it. One has to be fought on horseback, for example, while another is fought underwater. They’re almost refreshing despite feeling familiar within gameplay, and I only wish there were more of them.

Having so many systems at play is a double-edged sword, though, and the positives mostly end at the boss fights. Within moment-to-moment gameplay, and as you progress throughout the story, almost nothing has any time to breathe or evolve because new elements are introduced so commonly. An early sequence has you piloting a mech to traverse an oxygen-free zone, but despite the game’s efforts to inform you that the mech can be spawned at will, I can count on one hand the number of times I was allowed to spawn it. It wasn’t until the latter third of the story that a horse is introduced and allows you to run faster around the open world. Those oxygen-free zones are one of a few biohazard zones, too, but the rest of them, like the radioactive or freezing cold zones, are mostly completely avoidable except for a handful of side quests. These are just a few of the mechanics that feel like they’re there specifically because the game thinks they should be, alongside an entirely skippable crafting mechanic and insultingly easy puzzles. Even the open world as a whole, though there are diverse and colorful environments that are fun to explore and mostly interesting to look at, feels like it exists not because an open world adds to the experience but because an open world is the obligation. 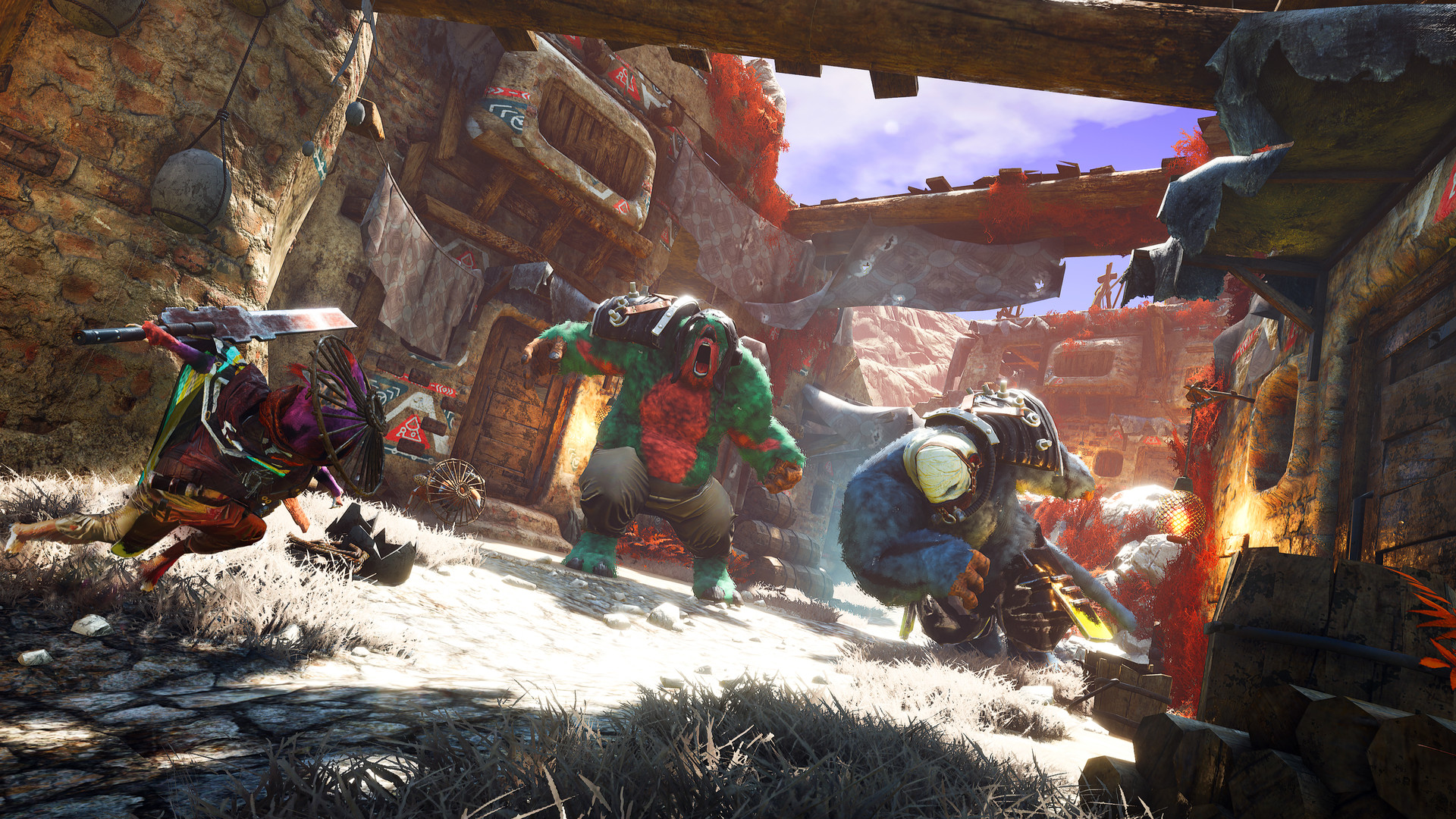 "Within moment-to-moment gameplay, and as you progress throughout the story, almost nothing has any time to breathe or evolve because new elements are introduced so commonly."

What the gameplay truly seems to suffer from is a lack of anything truly special. For almost every single mechanic, you can ask yourself which game the mechanic was inspired by and, in most cases, which game does that specific mechanic better. While I appreciate that it tries so many things, most mechanics don’t build on each other, but instead are constantly tripping over each other for screen time.

While I don’t dislike many of the things Biomutant tries to do, it takes so much inspiration from so many other games that it forgets to do anything unique. So many of its elements, from its morality system to its open world structure, feel ripped straight from other, usually better games. Combine this with a severe tonal conflict and you have a strongly mixed experience. The hook is strong, and the gameplay can be great, especially in those monumental boss fights, but when it comes down to it, I look at Biomutant and I see way too many watered-down components that leave it drowning in its own ambition.

The Xbox One version of this game was reviewed on Xbox Series X via backward compatibility.

Many derivative elements; Too many mechanics; Conflicting tone; Uninspired morality.

Final Verdict:
AVERAGE
Biomutant works best on paper, but it has too many derivative elements for anything alone to stand out.
A copy of this game was provided by Developer/Publisher/Distributor/PR Agency for review purposes. Click here to know more about our Reviews Policy.