Did you know Irrational Games released the box art for Bioshock Infinite last week? Did you know it looks exactly like Uncharted: Drake’s Fortune? You didn’t, didn’t you? Well as you can probably see in the image below, the similarities are astounding and I don’t think they’ve played the Uncharted game or at least compared the box arts to various games while approving it for the game.

The box art doesn’t feature Elizabeth, the central character of the game, and some of the fans have expressed their outrage on Twitter, as reported by Kotaku.

It features Booker DeWitt, the main protagonist of the game, whose face you probably won’t be seeing in the game because duh, this is a first-person shooter. The decision to go with this box art should be questioned because it doesn’t portray the game well and is quite similar to the first Uncharted game. 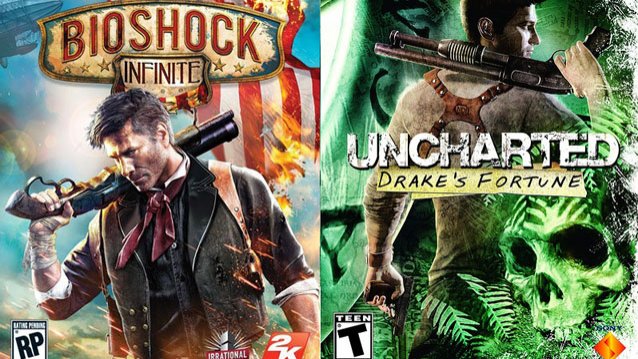 Now you can see what I am talking about based on this pic. There are a lot of fan made box arts out there which could have been used for inspiration, but no, they chose this one. The PS3 version contains the first Bioshock game and is compatible with PlayStation Move. Anyhow, check it out below.