As I headed into the clinical halls of 2K’s Windsor office, I had a feeling I was in for something special. I passed the memorabilia littering the halls, and it triggered fond memories of their back catalogue: Borderlands 2 posters, XCOM billboards, a life sized Little Sister statue and best of all: no sign of Duke Nukem.

I sat down, the giant TV in front of me and an Xbox 360 controller gripped firmly in my hand. The wire on the controller didn’t lead to an Xbox though, and I can only guess the specifications of the monster whirring away inside the cabinet it was housed inside.

It’s 1912, and you’re back in the sea. But this time you’re safely aboard a boat, with a man/woman double act ferrying you to the lighthouse, looming in the distance. The male announces that Booker (the protagonist) doesn’t row, and something feels off.

The odd couple in the boat have a surreal aura about them, and there’s a definite sense of ‘Twilight Zone’ about the affairs unfolding in front of you. The story instantly grabs you by the face and shoves matchsticks in your eyes, enthralling you in its mysteries. 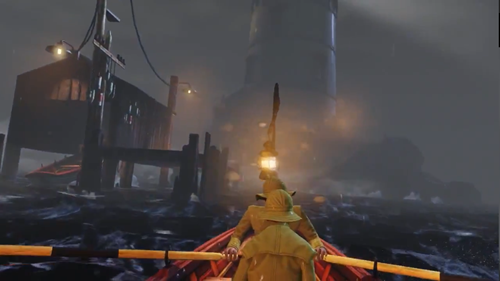 It’s not only the conversations that draw you in, however. Every scene is crammed with an abundance of detail. The waves wrestle with one another, as a thousand crushed diamonds glisten on its surface.

Every texture is like fast relief Prozac for your eyeballs.

The aforementioned lighthouse functions as an elevator to the floating city of Columbia, much like the elevator that took you into the depths of Rapture, but ascension is a more impressive spectacle.

Columbia is the perfect contrast to the apocalyptic Rapture. The amount of detail in every scene puts many games to shame and you can absolutely tell that it’s a labour of love. People mill about, engaging in conversation, whilst hummingbirds hover near the flowers in the long, flowing grass. Light beams through the clouds and dissipates through every small gap in the trees, as fireworks explode all around you. Buildings, adorned with balloons and propaganda, shift and float into place in front of your very eyes, as far off islands linger on the horizon.

Red, white and blue adorn absolutely everything and the city and its denizens are exploding with a sense of misplaced jingoism.

Extreme patriotism isn’t the only vibe you get from Columbia, though. The citizens are brainwashed by the propaganda that bedecks every street corner, like the Kinetiscopes, which essentially play you a silent movie – one of the most aptly named being: ‘How To Deal With The Irish Problem’. 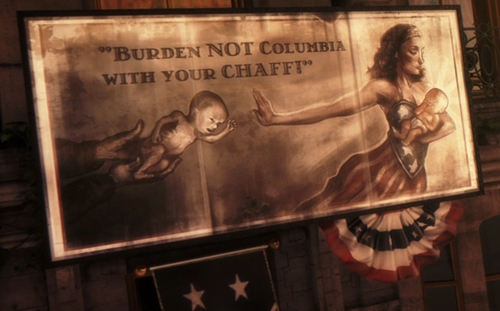 The themes of racism are dealt with subtlety and maturity, which is important to note. And I found it refreshing that a game was willing to tackle such a controversial and adult theme.

‘Mature’ is a word that many games throw around in PR blurb, usually because of breasts and decapitations, so it’s exhilarating for a game to tackle proper adult themes, such as racism, chauvinism and children bearing arms. It’s not just thrown into the game for the ‘shock factor’ either, as these themes sit comfortably within the game’s timeline.

There is one scene in particular, that I won’t spoil for you here, but it shocked me to the core and I’m surprised it wasn’t censored. I’m glad it wasn’t, though.

The similarities between Columbia and the ill-fated Titanic, which sank the very same year, are notable. In another parallel twist on reality, that same year a patent was applied for, to synthesise the drug MDMA. Much like the drug-like Vigors that the Columbian citizens drink to imbue them with supernatural abilities, but we’ll go into that later.

Time plays a huge role in the labyrinthine plot.

Not long after Booker’s arrival in Columbia, I was strolling around, soaking up the ambiance and noting every incidental detail that I happened to stumble across. I came across the ‘Bee Sharps – Columbia’s gayest quartet’ and I stood and listened for a while, aurally devouring their dulcet tones. Then it hit me. They were singing a Beach Boys song and the more astute among you will notice that this song is from the swinging sixties.

Do you think Ken Levine and co. made a period error? I certainly don’t.

As in the original Bioshock, the technology on display is far ahead of what we had at the time and the mechanisms run via alternative power sources. There are robotic vending machines and gun turrets, as well as robotic horses, so no fear of them ending up in your lasagne, I suppose. 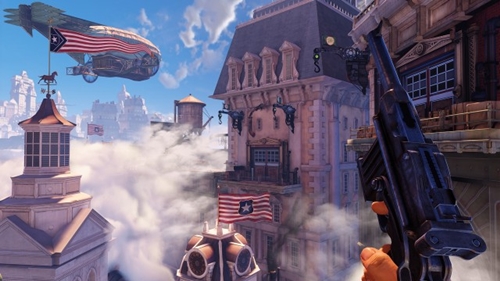 This game has ALL the vistas.

Once I had finished wandering around in awe, I decided to play some carnival games. These are essentially cleverly disguised (and completely optional) tutorials – teaching you the basics of Vigor and firearm usage.

The first Vigor that you acquire allows control over machines, allowing you to turn turrets into allies and make the robotic vending machines spit coins at your feet. This power is extremely handy when things inevitably kick off. The build up to the action scenes is quite a long one, made even longer by my procrastination, but the build up was something I enjoyed and I wanted to be saturated by it.

Many games wouldn’t get away with such a creeping crescendo, but I just wanted to bathe in it and breathe it into my lungs.

With such an unconventional opening, it’s a good job then, that the action holds up to the same lofty standards. Your first encounter is based around melee combat, where you use the Skyhook (that you attain by brutal methods and is like a drill arm, but un-drilly) to pummel the faces of your adversaries.

Melee attacks are handled with a click of the right stick (if it ain’t broken, don’t fix it) and the attacks home in, semi-automated, straight into your victim’s face. It’s not long before you pick up a pistol, which functions with a snap-to aim when looking down the iron sights, and things start to get shooty.

By default, satisfying RPG-like numbers pop up as you damage your enemies, and also signify when your target is vulnerable to damage. I didn’t find these intrusive, but they can be turned off if you find them distracting, or that they take away from the immersion.

The Vigors, akin to the Plasmids in the first Bioshock, allow you to fight in a more tactical manner: laying traps and turning enemies to your side. More will be available in the full release, but the ones in the preview build all felt good to use, and gave you a specific, tactical edge.

It’s a good job that you have these supernatural abilities, because you’re not just here to sightsee, you’re here to save a damsel in distress. Elizabeth: the Lamb of Columbia.

When you finally arrive at the prison, masquerading as a gleaming statue, you enter through a web of labs and testing chambers containing research notes and audio logs. There is a room with subwoofers pulsating to an ethereal song and seemingly trying to harness some sort of power resonating from the young lady located deeper within the compound.

You feel like a voyeur, spying on her through one-sided glass as she wanders about in her chamber, blissfully unaware of your presence. She opens a rift in space-time, and you see a window into the future, with a cinema showing ‘Revenge of The Jedi’. The vision of times to come is cut short however, by a van careening towards the young lady, forcing her to close the rift in a panic.

Once the thimble fingered Elizabeth joins your company she never feels like a burden. In the calm moments she carves her own path, never forcing you to follow or to wait. During combat she stays out of the way and you have no need to protect her.

In fact, in combat she soon becomes weaponised.

She makes herself useful by throwing you weapons and ammunition as well as health packs. She calls to you when she has something of use and a timely button press prompts her to throw and Booker swing around and catch. She scavenges money outside of battle, too – flipping a coin to Booker, in a lovely touch. 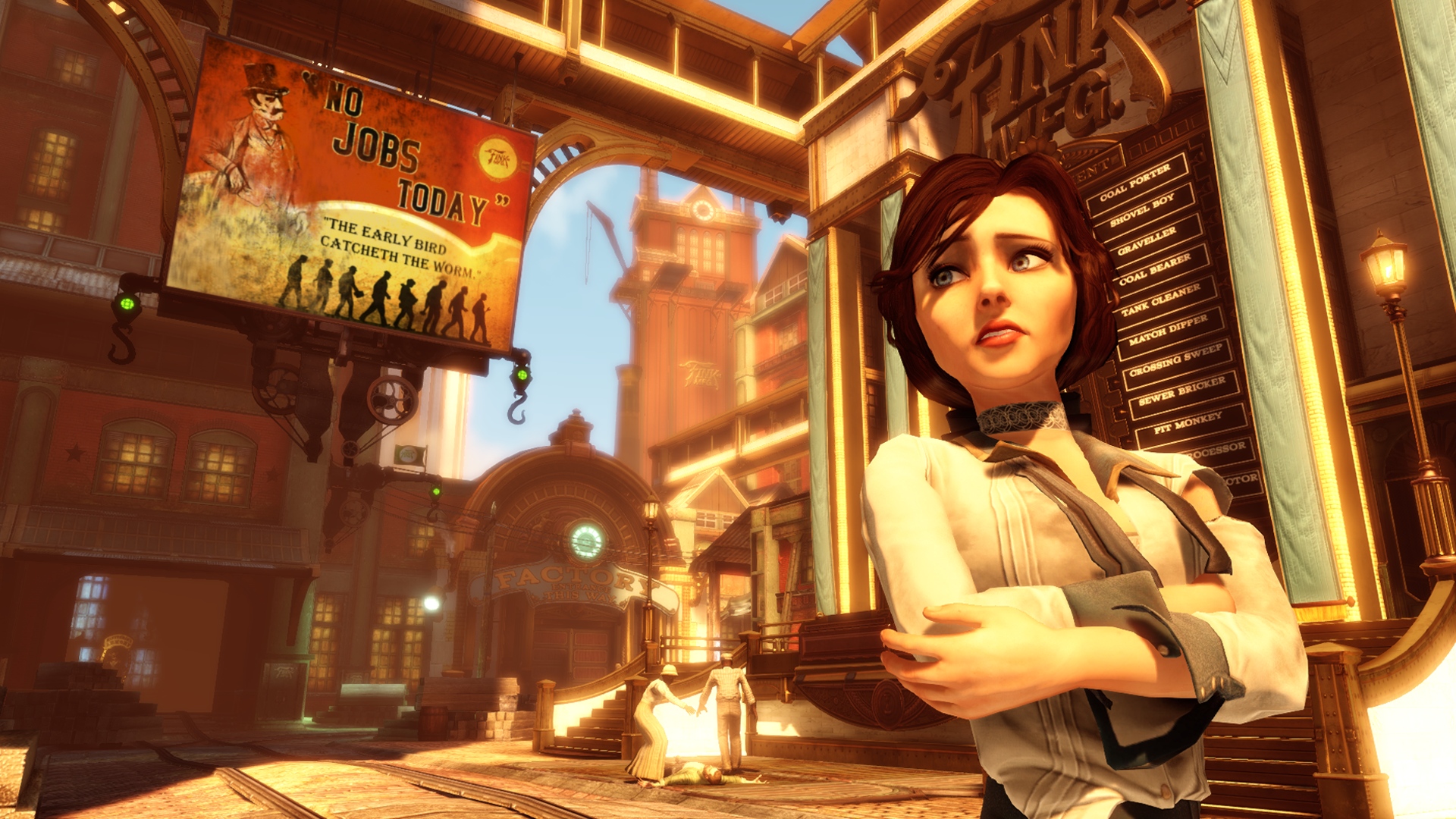 Her ability to open rifts also comes in handy during conflict, allowing her to pull things into existence through time itself. These seem to be varied, for example, in the section I played there was a turret that you could pull through time to aid you, complete with a defensive wall. The other option was to phase a balcony into the present, allowing you to gain a vertical advantage on your enemies, from where you can do a variety of things, like send a flock of crows to peck out their eyes.

The way you phase these into existence feels a bit fiddly at first, but this was shown near the end of the preview, so only time will tell if it gets better with practice.

One area of the game that does feel instantly intuitive, though, is the way the player uses the Skyhook for traversal. There are hooks dotted around the environment, and when you look at them they emit a haze, signifying that you may attach to them. This is done with a quick tap of the jump button, which sends you zooming towards the intended location, where you hang until you look at the spot where you want to land (often an enemy’s face) and jump again.

When used in conjunction with the rollercoaster-like Skyrails it provides a feeling of euphoria of which I’ve not felt in a game for a long while. These airbound tracks zip you around Columbia with grace and ease, even allowing you to jump mid-descent so you can speed up the traversal if you’re under fire. It feels intuitive, and more importantly for a game, it feels fun.

Fun isn’t hard for Bioshock Infinite to pull off when the intensity heightens, as it’s a game that manages to make exploration fun in itself. When I get my hands on the full game I’m going to crawl through it and bask in the rich universe created by Ken Levine and his brilliant team of visionaries.

Everything I saw in the preview just left me wanting more – it feels like a shot of originality straight to the main vein and for me, March 26th can’t come fast enough.